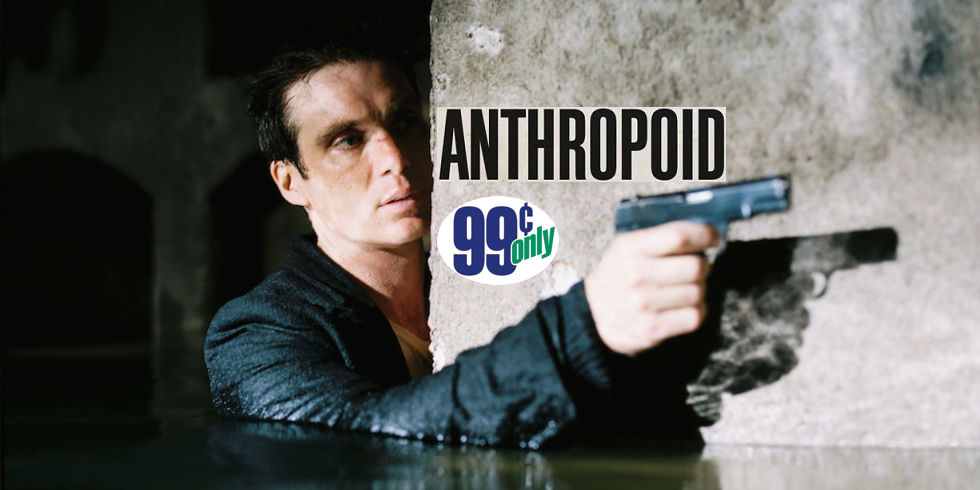 This week, Cillian Murphy and Jamie Dornan take down a Nazi mastermind in the harrowing WWII drama Anthropoid.

Cowards Die Many Times Before Their Deaths

Right now, you might be thinking, “great, another heroic WWII movie with evil Nazis doing evil things while absurdly handsome good-guys set out to stop them.” Well, if that’s the case, I’ll just say this – turn on the news. Movies about evil Nazi bastards can stop being made when evil Nazi bastards stop finding people who listen to them. So yeah, Anthropoid is a heroic WWII movie about a couple of absurdly handsome good-guys out to stop an evil Nazi. But Anthropoid is not your typical WWII film. Sean Ellis’ ‘inspired by true events’ drama aspires to so much more.

There’s Nothing Romantic About War

Before we get to that film, let’s have a quick lesson in history, shall we?

By September 1941, the Nazi war machine had conquered most of Europe. That included the subjugated Bohemian Lands of Czechoslovakia. Seeking to fortify the region, Hitler sent his third in command to the capital city of Prague to enforce Nazi rule. His name was Reinhard Heydrich. He was the architect of Hitler’s ‘Final Solution’. And he quickly earned the nickname “The Butcher of Prague.” Less than two months after Heydrich’s arrival, the exiled Czech government had seen enough. Josef Gabcík (Murphy) and Jan Kubis (Dornan) were dispatched to Prague in December of 1941. Their mission was simple – make contact with the Czech Resistance and assassinate Reinhard Heydrich. Its code name was Operation Anthropoid. It was anything but simple.

Up to speed? Good. ‘Cause Anthropoid follows that mission from the botched parachute drop that began it to the bloody standoff that finally ended it. Sounds exciting, right? Those two moments alone would seem to frame the film as a war adventure set against the breathtaking backdrop of Prague, CZ. And there is plenty of action throughout Sean Ellis’ film. Anthropoid is at times a heart-thumping tale of espionage. The kind that’s rife with guns and fake identities and tense silences in secret hiding places where a bead of sweat or a wrong move could cost everyone you know their life. More often than not, Ellis eschews that standard action movie fare to craft a compelling human drama about a few brave souls willing to pay any price in the name of justice.

Much of that drama stems from the performances of Cillian Murphy and Jamie Dornan. The pair bring an effortless charm and studied nuance to their roles – one a cold-blooded killer (Murphy), the other a weak-willed romantic (Dornan). Ellis fills in their world with a well-drawn cast of characters. First by way of the Czech Resistance, led by a deliciously understated Toby Jones. And later through unexpected romantic entanglements – Murphy enraptured by a simmering connection with the wearied but warm-hearted Lenka (Anna Geislerová) and Dornan in the wide-eyed wistfulness of Marie (Charlotte Le Bon). But romance is often an unnecessary distraction. The film is most alive when Murphy and Dornan are left to their own, planning their attack and wondering if they actually have a chance to pull it off.

That question unfolds under a deft bit of writing from Ellis and Co-writer Anthony Frewin. While their script is alive with human drama, the pair surround their cast with historical details that lend an air of authenticity to their story. The magnitude of planning, the angst of waiting for orders, and the majesty of Prague itself are felt in every structured moment of their story. As a result their characters are credible. Their world is full of legitimate danger. Their action never feels forced. And their story carries weight.

Operation Anthropoid was the only successful assassination of a senior Nazi Officer during the war. While it brought a swift and brutal response from the Nazis, it proved a rallying cry to Resistance fighters across Europe that no one was untouchable. And that the fight must go on. Still, the story of Anthropoid has often felt like a blip in the history of WWII. Until now. Ellis & Co. have finally given it the spotlight it deserves.

You bet. Look, it’s a bizarre time to be alive. The world feels as unstable right now as it has at any moment in history. In all the chaos and rhetoric, it seems that some people need reminding that Nazis are murderous, inhuman bullies. They are and always will be the bad guys. The only way to stop that sort of tyranny is to stand up to it. Anthropoid is a taut reminder that resistance to evil is never futile. It is essential. And it’s up to all of us to see that it happens. That Sean Ellis’ film is such an entertaining reminder of that fact is a welcome bonus.