This week finds an ambitious Chris Rock writing/directing/starring in Top Five, the incredible, true story of the Haitian Revolution of the late 1700’s…I’m sorry, I can’t seem to write that with a  straight face. Let’s try again.

This week finds an ambitious Chris Rock writing/directing/starring in Top Five the incredible, not-quite-true story of a comedic superstar trying to overcome and/or rediscover his funnyman roots. Deeply uneven, occasionally hilarious, and not-quite romantic, Top Five sees Rock laying himself on the line like never before and almost finding himself in the process. Rock plays Andre Allen, a well-loved actor who made his name as a standup comedian before making a killing as a movie star. Allen’s calling card is his beloved film series Hammy The Bear, where he plays a grizzly bear (in full bear costume) who doubles as a foul-mouthed cop. On the surface Allen has it all: tons of cash, a successful career, and
an imminent wedding to a beautiful reality-tv star. He’s even got a new dramatic film about the Haitian Revolution hitting theaters. Still, something is off with Allen and none of his success seems to satisfy. Allen’s new movie may be a failure, his soon-to-be wife is more concerned with TV ratings than with his feelings and he’s just not sure if he can even be funny anymore. Allen is a man on the edge and Top Five is principally devoted to the search for his true self.

Enter Chelsea Brown (the supremely gifted Rosario Dawson), a NY Times journalist attempting to write a feature about Allen. Brash and passionate, Chelsea is a bully of an interviewer who also knows when to sit back and listen. Each with their own troubled past, Allen and Chelsea spend the bulk of Top Five walking the streets of New York over the course of one endlessly eventful day. They cry, they laugh and they cuss…a lot…as they look for a little truth in their lives and in each other.

“If You Look At My Comedy, It Was Always Serious”

Top Five opens with Rock mid-stride on a New York sidewalk with Dawson. We don’t know a thing about them except what we glean from their conversation, which swirls around the general state of race, sex, and politics in America. Sharply written with an easy, natural feel, the scene clocks in at a beautifully unedited 95 seconds and ends with one of the funniest jokes in the film. It’s serious stuff, but funny too and exactly what you expect from Rock. Unfortunately, Top Five fails to match the urgency of the opening and begins to fall apart almost immediately after the title card fades.

Rock’s uneven script is chiefly to blame for the failures of Top Five, which is odd because there is a solid flow to the writing. Witty insights into celebrity culture run steadily through the story and (as expected) Rock finds new and fascinating ways to make us think about racial issues. Top Five is most successful when Rock focuses on the personal. Strolling through the neighborhood where he grew up, Andre shares an unexpected and brief encounter with his father, then spends a laid-back afternoon with friends from the old neighborhood. Rock deftly blends the humor with the drama and a strong sense of purpose fuels these moments. We fully understand and embrace Andre through them. Sadly, Rock almost immediately undoes the feeling with a string of cheap jokes and gratuitous sex scenes. Se la ve, I suppose.

Top Five completely loses its way in the largely unnecessary romance between Rock’s actor and Dawson’s journalist. Dawson is her usual charming-as-hell self, but Rock’s script doesn’t quite bring Chelsea to life and you never feel the necessary heat between she and Andre. Sure, they share a struggle with alcoholism but little else and their budding romance feels forced and far too rom-comedyish.

The sad part is what Top Five could have been.  If Chelsea had simply been a crackerjack journalist lending a sympathetic ear to Rocks’ struggling celebrity, the rest of Top Five likely would have held together quite well. It may even have been a really funny character study. What we get instead is half-baked characters in a fully-baked romance.

Paired with a handful of ineffective, overly long scenes (especially Allen’s supposed rock-bottom, alcoholic moment that will be scoff-worthy to true addicts) and you have a film that just doesn’t hit its mark, or maybe doesn’t know what mark it wants to hit. 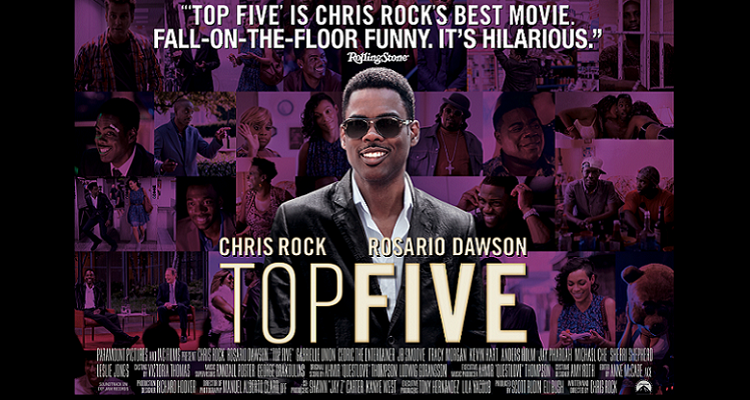 Inspired by the success of his friend Louis C.K.’s TV show, Louie, Rock wrote the script for Top Five locked in his trailer during breaks from filming Grown Ups 2.  I’m sure Top Five felt like a masterpiece in comparison to the Grown Ups sequel, but it doesn’t come close to matching the audaciously transparent humor that makes Louie so painfully funny. Top Five just isn’t brave or focused enough to make you laugh at all the pain and awkwardness of everyday life.

As funny as Chris Rock’s standup is, he’s never managed to successfully blend that humor into his movies.  The wild and unpredictable nature of his routines just doesn’t translate to film.  Top Five is Rock’s third go as director and his previous efforts, I Think I Love My Wife (2007) and Head of State (2003) are similarly uneven. Top Five is a more ambitious film. You can see that Rock wants to make great art and someday he just might. He’s got a great eye and stellar ear for dialogue, but he hasn’t quite sorted out how to put all of his talents together for an entire film.

The good news is that Rock has figured out how to work with actors. From J.B. Smoove on down to Cedric The Entertainer, credit is due to the director for coaching solid performances from typically unwieldy actors. Most surprising is Rock himself, who is starting to deliver on the promising work only glimpsed at in previous films. With Top Five, Rock sheds the silly mugging and gaped-mouth reactions that have made his performances cringe-worthy over the years and opts instead for restraint. We finally get the full effect of his deeply expressive eyes and that effortlessly charming smile. The result is disarming. There is an actor behind all those ridiculous looks. It’s nice to see Rock embracing him after all these years.

Though the actor is emerging, the auteur is very much a work in progress. Despite the stellar cinematography from Manual Alberto Claro, the structure and feel of Top Five are hopelessly unfocused and owe a bit too much to the films of Woody Allen. Where Woody succeeds and Rock fails is simple, Woody has always matched his comedy to his style. With Top Five, Rock attempts to match his comedy to Woody’s style. The result is an uneven mess where nothing rings true and even hilarious cameos from Kevin Hart, Adam Sandler, Whoopi Goldberg, Jerry Seinfeld and Tracey Morgan don’t get the laughs they deserve.

I keep thinking back to the opening scene of Top Five. In 95 seconds, Rock manages to introduce his characters, set the tone of his film and gets a perfectly executed laugh, and he does this all before the title card. Now why couldn’t he stretch that vitality the rest of the way?

Part of me wants to say yes. I’d almost tell you to rent Top Five just to watch that opening scene, but I cannot recommend you dropping that $0.99 this week. Though a step forward for Chris Rock, Top Five is little more than an intriguing disaster with solid acting, a few good laughs, and far too many cheap ones. If you’re in the mood for an honest laugh and/or a good cry, I’d recommend heading over to Netflix and binge-watching a few episodes of Louie instead. Or you could try and track down a copy of Hammy The Bear 2. 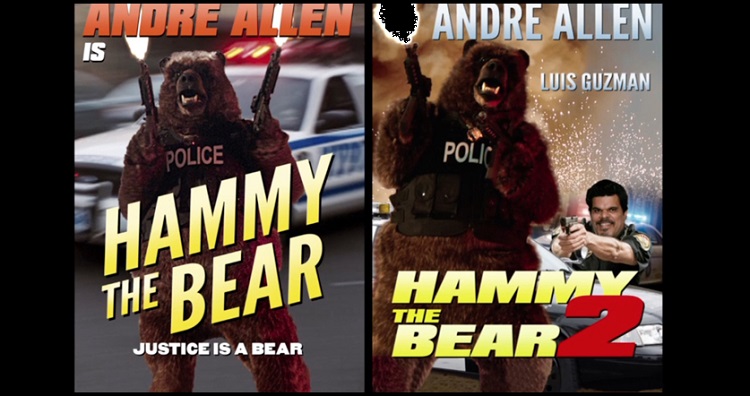