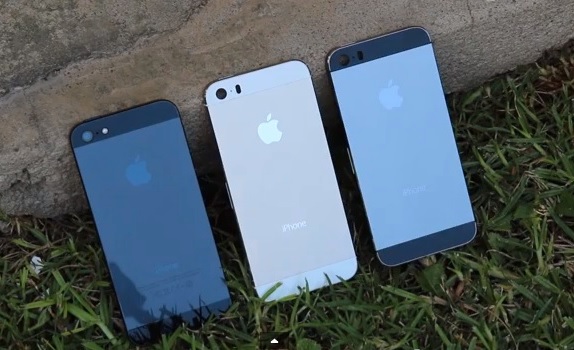 The iPhone will now ship in more than just white and black. With less than 10 days to wait for the next iPhone – expected to be launched at an Apple event this September 10 – numerous leaked videos have emerged that seem to show off both the iPhone 5S, and the iPhone 5C.

“That is Champagne. Not Gold”

If the videos are authentic, then the iPhone 5S will be available in 3 colors – the standard Black, White, and a new Gold/Champagne. The leaks were reported by AppAdvice, and also feature the iPhone 5C – the rumoured plastic, budget version of the iPhone.

By the looks of it, the 5S seems to be the same size as its predecessor. The back panel is almost exactly the same. The Gold color though, makes it look rather good. The 5S also seems to be noticeably thinner than the previous iPhone 5 – which was quite slim itself at 7.6mm. This would suggest the phone may also be lighter. The Champagne colored variant has white strips at the top and bottom.

On the whole then – the iPhone 5S may indeed be a small incremental upgrade to the iPhone 5 as many are expecting. Previously too, when Apple launched the iPhone 4S – the device only offered small upgrades as compared to the iPhone 4.

Seen in the video is the blue color variant of the iPhone 5C – one of the five color options that it is expected to launch with. Of course, its much thicker than the premium 5S – and more rounded and bulky as well. This is probably because of its polycarbonate body. A black Apple logo is featured at the back of the device. There’s not much known about the specifications of the iPhone 5C.

Another video by TLDToday shows off the inner casing of the iPhone 5S. The casing features increased space for the phone’s battery – while reducing space for the logic board and chipset.

The video also confirms what we’d brought to you earlier – the iPhone 5S will indeed feature dual-LED flash for better low-light photography.

The budget version on the other hand – the 5C, will ship with considerably inferior specifications than the 5S. The build too, seems to give away a cheap, unpleasant look never before associated with the iPhone.

iOS 7 to be Launched Simultaneously?

Apple is also expected to launch iOS 7 to the public simultaneously with the iPhone release. A leaked email from developer Owen Williams on The Verge has him claiming Apple will release the iOS update on September 10. Apps for iOS 7 too have started rolling out.

The iPhone 5S should launch with a faster processor – the A7. There’s no upgrade on the RAM – it remains at 1GB. The camera’s f2.0 aperture lens will be complemented by dual-LED flash for improved low light photography. Apple may also offer more option on storage, with a 128 GB variant also expected to be made available. And of course, there might just be a fingerprint reader on the device.

The iPhone(s) should officially launch in San Francisco on September 10.