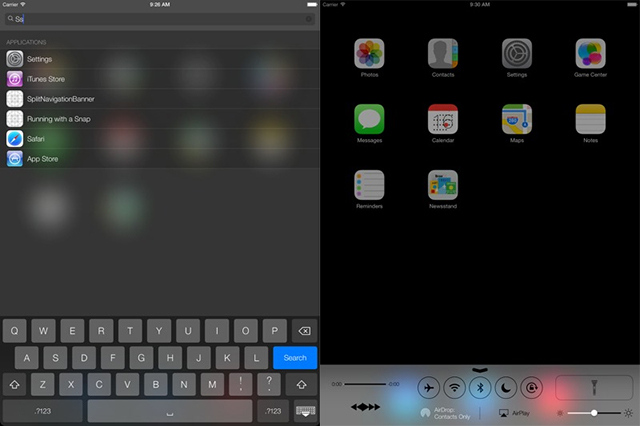 Apple’s new-look, flat-faced iOS 7 has had not one, but two leaks in the past week. Both of them involved the iPad, but both seem to suggest conflicting variations in the functioning and interface of the upcoming OS, slated to hit devices this fall.

The first leak, by Twitter user Sonny Dickson, consisted of a number of screenshots on the iPad, which were obtained using Apple’s XCode platform’s simulator feature. The screenshots showcased the same looks Apple showed off when it unveiled iOS 7 at WWDC this year – with the new Control Center, new colors, and the flat look.

According to the leaks, some unexpected, but major interface changes seem to have been introduced. The Notication Center is shown to take up the entire screen of the iPad, unlike a small portion in earlier iOS versions. The Control Center too, which takes up a large portion of the screen on the iPhone, is redesigned to fit in and occupy more horizontal than vertical space on the iPad.

The Control Center is a new feature introduced in iOS 7, allowing quick access to direct toggles for various options like Wi-Fi, Bluetooth, and access to brightness adjustment, music etc. It is activated by swiping upwards from the bottom of the screen.

But before you assume this is how iOS 7 is going to look like on your iPad, there’s some conflicting evidence coming in from Russia. A video posted on YouTube showcases the iOS 7 running on the iPad too. But unlike the earlier leak, this one goes on to show the Notification Center as the narrow menu it has been on earlier versions.

The control center too, leaves a lot of room on the display on either sides. The video further demonstrates the functionality of the OS on the iPad – showing home screen animations and the other new additions that were also featured on the Twitter leak.

The video leak obviously seems to be the more credible source. The iPad is expected to be running the Beta version of iOS 7, which has been only released to developers as of yet. The images on Twitter also show a flashlight toggle on the Control Center – something that shouldn’t be there. However, the video leak’s credibility takes a beating when you realize that Apple hasn’t released a Beta version for the iPad yet.

iOS 7 is the biggest change to the platform since the very first iPhone itself. The new update, slated to release for the pubic this fall, brings in a whole lot of changes to your iDevice experience – right from looks to functionality. Check out our guide to iOS 7 here.