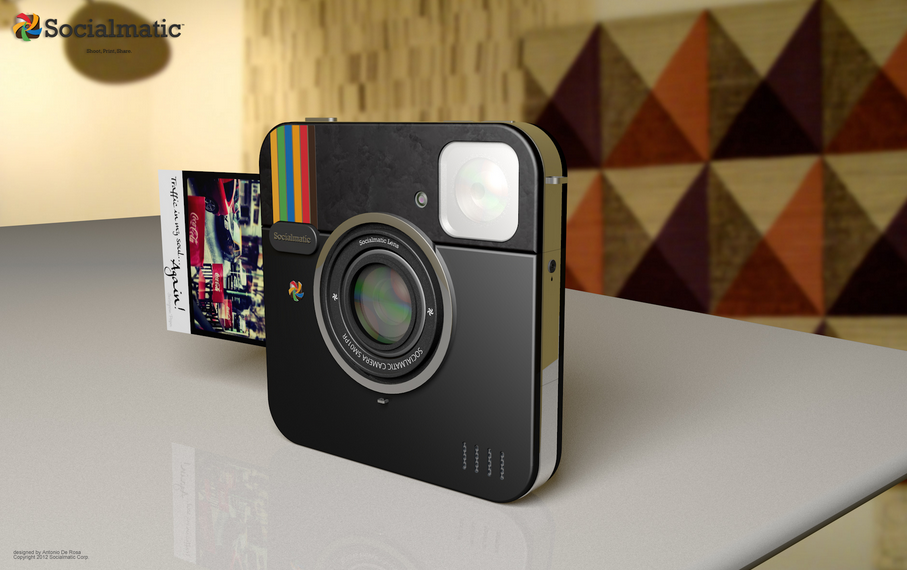 Instagram and photo editing apps are very popular on the app store at the moment. There are a number of photo apps on the app store but Instagram continues to be the most popular, with over 100 million users across the world and it is showing no signs of slowing down.

I recently wrote about how Instagram has lost it’s way a little bit, but this is one idea that I certainly support, although it’s not actually Instagram producing it.

A small Italian company (ADR Studio) had an idea to create a Polaroid camera based on Instagram; where you can edit your photos and then print them out. How cool is that?!

As soon as the idea was mentioned and pictures were posted of the possible design, it went crazy. People all over the world became interested in the product, not knowing that it was just an idea and there were no plans to actually make the camera.

The team at ADR Studio suddenly realised that they could be on to something, bought a license to use the Polaroid name and Socialmatic was created. Just like that, a million dollar idea is soon to become a reality.

ADR Studio is an Italian based Marketing and Comunication/design company, Socialmatic LLC is the product of an idea going viral. Up until recently they have been taking donations to raise money for the project from their website, it has since disappeared.

The company  is taking every chance they can to let people know that there is no link between the Socialmatic Polaroid camera and Instagram, even though the idea clearly came from Instagram; their Facebook page states that:

It’s not involved in any way with any existing social network and/or photo sharing service.

You only have to look at the camera design to see that it is based on the Instagram logo. Pretty quickly after they planned to actually make the product, Socialmatic have realized they can’t just steal the Instagram design. They are slowly trying to differentiate themselves from Instagram, but the link will always be there.

The full list of specs has not been released yet, but their website says that the product will definitely have:

You will notice in the video above that once the photos are printed out, you can stick them anywhere. The idea is that people will see the photo, scan the QR code and follow the photographer. To do this you will also have to have a Socialmatic camera, it will be exclusive to those who have one. This is a great idea because it makes owning a Socialmatic that much more special, Instagram has lost it’s way because it is no longer exclusive to those with smart phones because of their web-based profile.

There has been no confirmation of the price yet however, Socialmatic intends to make the product accessible to everyone.

The quality of the camera will be the biggest point for me, the number of megapixels of your everyday camera is continually rising. If Socialmatic wants to be competitive, the megapixel count needs to be at least more than the average smart phone, people don’t want to carry around their phone and a Polaroid camera.

To keep up to date with all of the information regarding the Socialmatic camera, check out their website. The Socialmatic will be released in the early months of 2014, the wait is on.