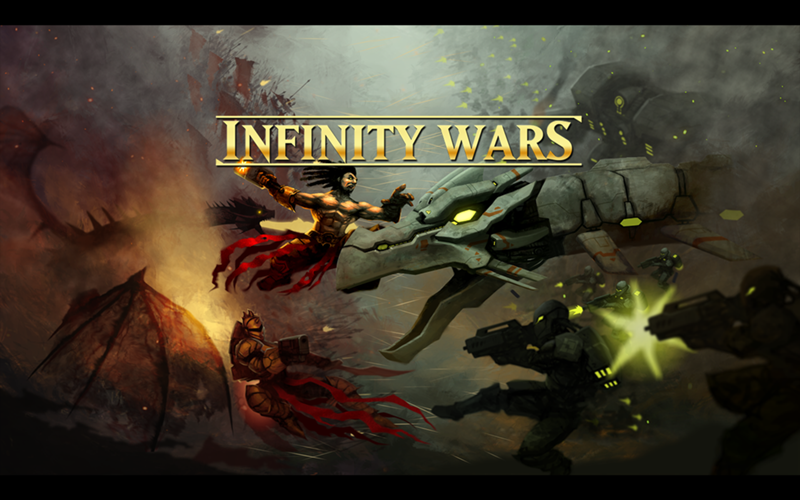 Since the advent of Magic: the Gathering, trading card games have opened up a unique and exciting avenue of geekdom. Over the years, countless TCG’s (trading card games) have sprung up. The most recent development in the TCG arena is the advent of digital variations of the genre. The foremost of these additions is Hearthstone, Blizzard’s FTP entry into the arena.

More than enough has been said about Hearthstone, so I thought I’d touch on a lesser known digital TCG:

Infinity Wars is another free to play digital TCG, but that’s where its similarities with Hearthstone ends. Instead of having the backing of a AAA company, Infinity Wars started through a Kickstarter campaign. Where Hearthstone focuses on simplicity, Infinity Wars is, at times, almost overwhelmingly complex. Finally, Infinity Wars at least attempts to have a system of underlying lore, while Hearthstone is really just a bunch of characters and creatures plucked from the Warcraft Universe.

All in all, Infinity Wars plays a lot like Magic does. You have a deck of at least 40 cards, you can summon creatures, play a variety of abilities, and everything costs varying amounts of regenerating resources.

That’s where the similarities end, though.

The most striking difference between Infinity Wars and any other TCG I’ve played is the simultaneous turns. Instead of the traditional, “I go, you go, I go,” both players plan out their turns at the same time and signal when they’re ready to proceed, at which point the computer takes over and determines the results of each player’s actions. This is extremely important because you have to predict what the other player is going to do to be able to win the game. Between this and the various Zones (which are important because they determine how a cards affect one another) the game uses, Infinity Wars has a unique tactical element that I haven’t seen in any other TCG.

You have 4 zones: Assault, Defense, Support, and Command. The Attack and Defense zones are self explanatory; the creatures in these zones either attack the enemy, or defend against the oncoming attackers. These characters are considered to be ‘on the battlefield,’ and can be targeted by spells and abilities with relative ease. The Support zone is a little more interesting. Whenever you play a creature, it goes into the Support zone, where it must wait for a turn before it can enter the battlefield or use any of its abilities. There are exceptions to this rule, of course, and ways around it, but by and large the majority of the creatures you play will spend their first turn twiddling their thumbs in your Support zone. Still, the Support zone grants a measure of protection to your creatures, since most spells can’t affect them while they’re there. The last zone, and probably the most important, is the Command zone. The Command zone is a set of three creatures which determine what cards you can have in your deck, and which you can access at any time. In essence, these cards make up the core theme of your deck. They can use their special abilities from the first turn, and can be played directly into the Assault and Defense zones, assuming you have the Resources to do so. The Command zone is also the most difficult zone to affect directly, and the few cards that can are relatively expensive.

Instead of relying on different types of mana to fuel your army and spells, like Magic does, you use a generic ‘Resource’ pool that increases every turn, just like Hearthstone. There are cards that can increase it, decrease it, and even increase your opponent’s. While this means that you generally can’t go over a certain cap as far as resources goes, it also means that you don’t have to devote an entire third of your deck to mana cards.

So what do you do with all that deck space that isn’t taken up by mana? Well, each faction has its own unique foot soldier which isn’t subject to the normal 3 card limit called unlimited characters. Each one is unique and useful in its own way. One unlimited character, for example, will raise another one of it’s type from the graveyard at the end of every turn, meaning you always have a limitless supply of cannon fodder. Another can be played directly into the Assault zone, making it difficult for your opponent to predict how much of his force that he needs to devote to defense.

Now how do you win? An excellent question, because there are two different ways to win in Infinity Wars. The first is by attacking your opponent directly. Like virtually every other TCG out there, your opponent has a finite life total. If you can reduce it to 0, you win the game. The other way to win is to make his army break and flee by attacking his morale. Each player starts out with a certain amount of morale points, which are reduced whenever that player loses a creature, and if you reduce that value to 0 his army breaks and flees, and you win the game.

Infinity Wars, like most other TCG’s, is divided into a number of factions, each of which has different lore, characters, and abilities.

The Cult of Verore is my favorite faction, simply because it focuses on killing every single character your opponent has. A massive flier coming at your fortress and you have no way to block it? Kill it. A defender that you can’t get past? Kill it. Your opponent has a commander that’s giving you grief? Kill it. A massive wave of enemy creatures about to smash your face in? KILL THEM ALL. Characters hiding out in the Support zone? You know the drill.

Not only that, but the Verore’s unlimited character gets stronger each time you massacre an enemy creature, so not only are you castigating your opponent for having the audacity to actually field creatures, but you’re getting stronger while you’re doing it.

The best thing about Infinity Wars, though, isn’t the tactical gameplay, the unique factions, or the regular updates. It’s the way they handle their free to play model.

I know. It sounds as weird to hear it as it does to say it, but bear with me.

Instead of making the FTP model burdensome, invasive, or downright insulting, Infinity Wars does just the opposite. To start out, the game will supply you with your own deck of cards,  then will proceed to throw cards at you at every opportunity. Oh, you just leveled up? Have a booster pack. You lost to the easiest AI opponent? Have a card. Finished one of the faction campaigns? Have a starter deck. Logged in today? Have another card.

I’ve only been playing for a couple of weeks, and I’ve already amassed a collection of over a thousand cards, and more than three quarters of them I got for free. The only downside? You can’t trade the cards that you get for free. Considering that I would have had to put $50 or even $100 dollars into any other TCG to get where I am now, that’s a small price to pay.

Apart from that, the in game currency is relatively easy to get. After a dozen or so games, you can afford pack of 3 randomized cards. If you’re willing to save up, you can get a pack of 15 without too much trouble, or even an entire prebuilt deck.

Their real money prices are extremely reasonable, too. You can pick up a pack of three cards for less than a dollar, and an entire pre made deck of 40 cards for a little more than $5. I recently caved in and bought two decks that were on sale, and I haven’t had any buyers remorse like I’ve had with other FTP purchases.

Infinity Wars isn’t without its flaws, though. For one thing, it’s still in beta, which means that it’s buggy at times. Cards won’t work properly, the animated portions of the game will overlap, won’t display properly, or are sometimes missing entirely, and the game will freeze occasionally. Another flaw is the terrible tutorial, which is almost bad enough that it’s better to jump in head first than wade through it. The artwork is mediocre at best, and downright terrible at times. The way they distribute XP and in game currency at the end of each match is also frustrating, because it’s based entirely on time. This means that if you win or lose a game exceptionally quickly, you won’t get the full amount of currency and XP. I’m sure this is to prevent players from breaking the system by intentionally losing, but there’s got to be a better way to do it.

All in all, Infinity Wars is a great game. It’s deep, challenging, and a whole lot of fun. Give it a try; you won’t be disappointed.