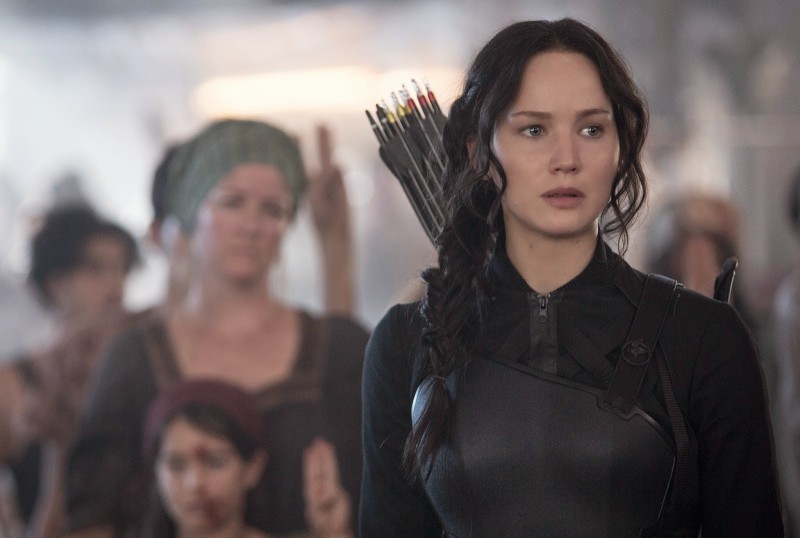 Prior to this month, fans of the hit franchise The Hunger Games (which consists of a young adult novel trilogy and a film series based thereon) had tasted only a smidgen of its newest entry, the film The Hunger Games: Mockingjay Part 1, prior to the its latest trailer, which was released a few weeks ago.

The trailer opens up with a shot of a ship—presumably the same ship that bailed franchise hero Katniss Everdeen (played by Jennifer Lawrence) out of the arena at the end of the last film entry, The Hunger Games: Catching Fire—flying over a forested, mountainous region followed by a shot of Katniss, her pal-slash-sometimes love interest Gale (Liam Hemsworth), and a few background characters sitting inside the ship. The next shots are of Katniss, still on the ship, about to climb out into a demolished-looking area (perhaps the remains of District 12, which was bombed into nonexistence at the end of the last film) and her with her younger sister, Prim. Over these clips, we hear Katniss lament that she “never wanted any of this”–that she just wanted to save Prim and “keep Peeta alive” (Peeta being Katniss’s former Game partner-slash-other sometimes love interest, Peeta Mellark, played by Josh Hutcherson). It is then revealed that Katniss is saying this to the franchise’s villain, President Snow (Donald Sutherland), via a video conference. In return, Snow delivers a chilling response: “Miss Everdeen, it is the things we love most that destroy us.”

The majority of the rest of the trailer consists of clips of District 13—a district thought to have been wiped out prior to the ending of Catching Fire—its military base-like underground facilities, and characters both new and old (including District 3 victor Beetee, District 4 victor Finnick Odair, and Katniss and Peeta’s former coach Effie Trinkett), most of which are training for the inevitable war ahead of them. The trailer also features footage of uprisings in other districts, Katniss’s disasterous visit to District 8, and the Capitol’s failed attempt at bombing and destroying District 13’s underground colony. Perhaps most interesting about the trailer, though, is that it showcases a scene that involves just Peeta—who was taken hostage by the Capitol at the end of Catching Fire—and one of the Capitol’s personnel, Games host Caesar Flickerman (Stanley Tucci), engaged in conversation. (Those who’ve read the novels will remember that during his containment in the Capitol, Peeta was brainwashed into hating Katniss and anything that had to do with her—a torture that, due to the novels’ perspective, was only summarized but never seen.) In the next scene, Katniss demands that District 13’s personnel—which includes President Alma Coin (Julianne Moore) and Plutarch Heavensbee (the late Phillip Seymour Hoffman)–do everything in its power to rescue the boy or else it’ll have to “find another Mockingjay.”

The Hunger Games: Mockingjay Part 1 will hit theaters on November the 21st of this year with tickets going on sale on October the 29th.