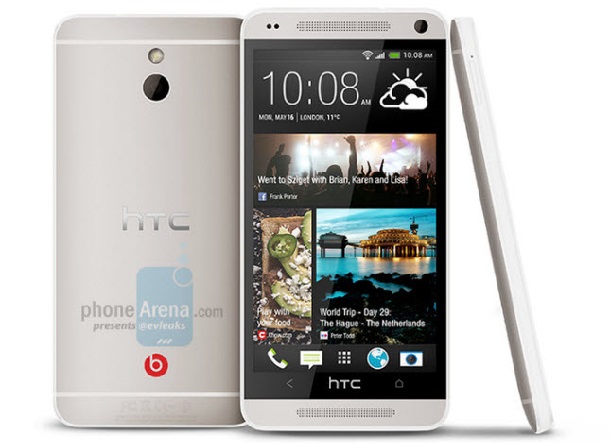 HTC’s latest flagship – the One, is a beautiful phone. At the same time, it is also a very expensive phone. With retail prices of the device hovering around the $600 mark, not everyone can buy the One. Plus, not everyone wants monstrously powerful phones. For many, a decent processor is good enough.

Fortunately for us, a more affordable (and lesser powered) version of the One might be on its way. Images and specs of a new device – which has been codenamed the M4, seems to have been posted on Phone Arena by evleaks – and it looks like it’s just a mini, and budget version of the One. A strategy similar to Samsung’s, which recently launched the Galaxy S3 mini and will soon be coming up with the S4 mini.

The M4 will feature a smaller, 4.3 inch screen with a 720p display. It will be powered by a 1.2 Ghz dual core Snapdragon 400 processor, and will have 16GB of onboard storage. Despite the reduction in specifications, the RAM stays the same at 2GB. It is likely to launch with Android 4.2.

HTC’s new camera child – the Ultrapixel camera (which hasn’t been as appreciated as HTC would’ve wanted) might also make it to the HTC M4 – making it only the second HTC to have the camera.

The battery is expected to be a 1700mAh one. Judging by the photos, the device seems to be exactly like the One, on a smaller scale. It may also include the One’s BoomSound speakers. Clearly, the device will be placed in the mid-range segment. To cut down on costs, the M4 may not be constructed from a single piece aluminium body unlike it’s big brother.

The M4 is expected to release under the “One” brand with a suffix, and is expected to be out by July this year. Evleaks has confirmed that phone would be available for AT&T’s network.