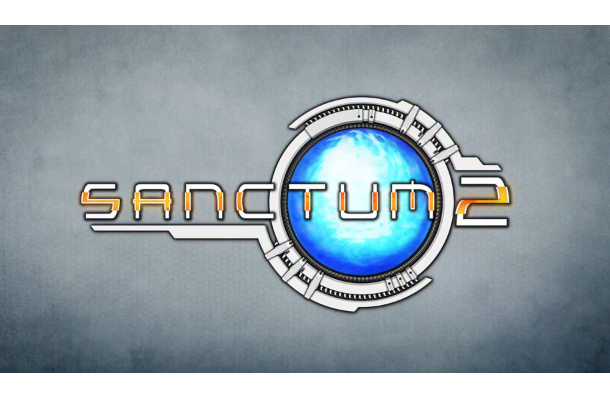 For the uninitiated, the tower defence formula is as follows: Build walls, manipulate the path of advancing enemies, mount weaponized towers on walls, eliminate each and every wave of enemies before they reach the base. This is the formula that is present in Sanctum 2, but with an interesting twist. 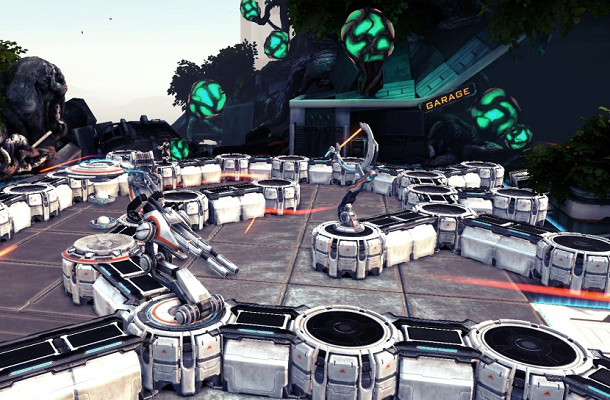 Instead of simply controlling an unseen hand from a top-down perspective, Sanctum 2 players assume the role of one of four different characters. Then, from a first person perspective, walls and towers must be built to protect each level’s “core” from a range of aliens invaders. But once the building phase is over and the aliens show their faces, the big guns come out and the cooperative, 4-player FPS carnage begins.

Each level usually consists of 8-10 waves of aliens, each comprised of a building phase followed by a attacking phase. Successfully defending the level’s core from destruction results in extra bases and money being dropped from orbit. Bases are placed and connected to form walls, onto which towers can be mounted. Towers costs money to build and upgrade, and a maximum of ten different towers can be constructed in any one level. Sound simple enough, right? 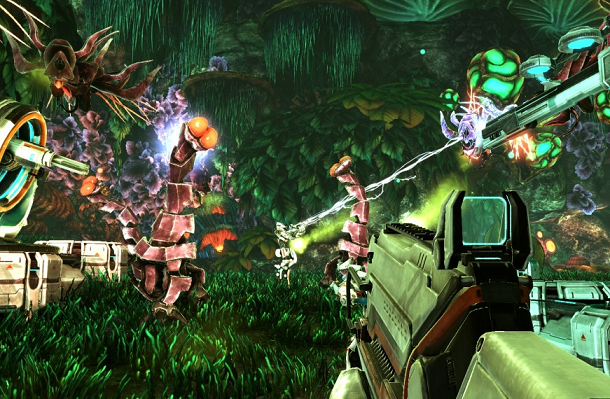 Coffee Stain Studios have increased the longevity of their unique blend of tower defence and FPS by adding an additional layer of customization to every level. For example, each of the aforementioned characters have a particular trait, such as running quickly or double jumping, as well as their own unique weapon. These traits can then be offset or built upon with equitable perks that grant speed boosts, extra damage, the ability to hurt enemies while falling, and many more. Add in the fact that a secondary weapon can be selected, and that only a limited amount of different towers can be brought into any one level, and the number of level-winning strategies becomes close to endless.

FPS with the Sheen and Sterility of Mass Effect

It’s not just the tower defence genre Coffee Stain Studios are shaking up. Sanctum 2 also moves away from common FPS themes by presenting players with luscious, vibrant and strikingly colorful environments. The futuristic laboratories, construction sites and landing areas give off an air of sterility reminiscent of that found in the Mass Effect games and the original Star Trek series.

While lacking originality, Sanctum 2‘s enemies are boldly designed and each have an appearance that matches their attributes in battle. At a glance it’s easy to tell which aliens armoured, speedy and explosive, allowing for quick analysis of the battlefield.

Mobile devices and the internet has been so over saturated in tower defence games that I’ve personally avoided the entire genre for years. Sanctum 2 has lured me back and proved to me there’s still much to be explored and expanded upon within the reams of tower defence. But most importantly, Sanctum 2 looks great, plays well and is a hell of a lot of fun to play.

The preview build of Sanctum 2 played was admittedly rough around the edges, but offered a great sneak peak into what the final product will be like. Between now and its TBA release in on Steam, XBLA and PSN, Coffee Stain Studios will have all the time they need to polish Sanctum 2 into the must have indie game of 2013.

Excited about Sanctum 2? have you had the pleasure of playing the original Sanctum? We’d love to hear your thoughts, so leave us a comment below!

Update: The publishers for Sanctum 2 have just announced a release date of May 15th.