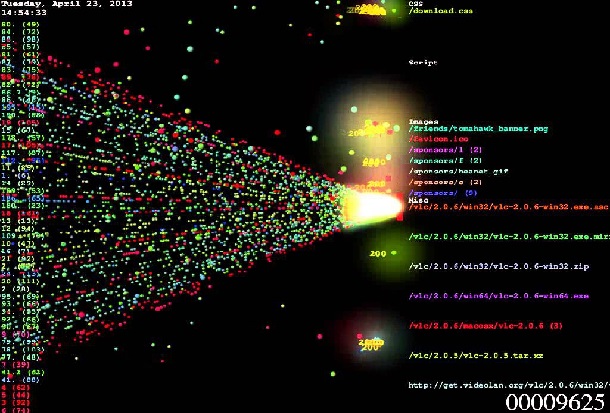 Ever wondered how a DDoS (Distributed Denial of Service) attack would look like? Here’s a visual interpretation – created by developed Ludovic Fauvet.

VideoLAN, the team that makes our beloved VLC player, had its site attacked by an equally beloved method of attack – DDoS, last month. The converging pulses represents traffic, while the spot where they are converging refers to the location of the VLC Media Player executable file. The server was receiving 200 requests every second, at a load of 30GBps. The attack lasted more than 30 hours, and later peaked at 1500 requests per second.

A DDoS attack is a hugely popular form of attack – hacker group Anonymous is known to use it quite often in its attempt to deliver ‘justice’. It is also among the easiest to perform. Systems send a huge amount of traffic to a website’s server. Since the traffic is too large to handle, the server collapses – and the site is brought down.

A DDoS attack is illegal, of course. It is considered a serious federal crime under the Computer and Fraud abuse act of the USA, and even carries a sentence of up to 10 years in the United Kingdom. Interestingly, Anonymous, in January 2013, filed a petition asking DDoS to be acknowledged as a valid form of protest.

The VideoLAN team eventually managed to identify the problem and reconfigured Ngix (it’s their high performance HTTP server) to tackle the requests. Soon, the site was running even at 400 requests every second.

The #DDOS on VideoLAN downloads infrastructure is now at 400 req/s. And we’re still up and running 😉

The video was created using a tool called Lostalgia, which interprets and gives us page requests in the way we just saw in the video. Here’s how a typical website’s server activity would look like. The vertical bar on the right is the server.