How DC Comics Still Trumps Marvel in One Specific Area

Let’s face it: Although movie fans might have different tastes, Marvel movies have recently given DC Comics a bit of a kicking at the box office and have garnered much more in the way of critical acclaim. Sure, Aquaman and Wonder Woman were decent additions to DC Cinematic Universe, but they have nowhere near the pull of the likes of the likes of Avengers: Infinity War and Endgame. At the moment, a new DC film might make for an exciting evening, whereas a new Marvel movie feels like a global cultural event.

Countless opinion pieces have been made on DC vs Marvel, and it’s clear you could make several arguments for the former. Indeed, there is plenty of ammunition in DC Comic’s cannon to allow it to step out of Marvel’s shadow soon, perhaps by going into darker and edgier areas like what is promised in Joaquin Phoenix’s Joker movie. But there is one area where DC Comics completely trumps Marvel today: Casino games.

The first thing to know about this area is that there used to be an abundance of Marvel-branded casino games online. In fact, they were among the most popular games online. Produced by Playtech, the likes of X-Men, Iron Man and the Avengers all had signature slot games. The games were ambitious, laden with special features and cool graphics. However, when Disney purchased Marvel for $4 billion back in 2009, the corporation told Playtech to rundown the licensing contract. Hosting no gambling content was part of Disney’s family-friendly approach, so Marvel Casino games disappeared from the internet a couple of years ago.

Playtech was faced with the loss of its signature casino game franchise, so who better to call than Warner Bros? A massive licensing deal was signed between the casino games developer and Warner Bros, allowing Playtech to start rolling out DC Super Heroes slots in 2017. Today, there is around 20 titles, with everyone from Adam West’s camp 1960s Batman to Aquaman getting the slot game makeover.

Aside from the brilliant graphics and gameplay, DC casino games have another huge selling point; namely, they are all interconnected, with any spin potentially triggering a four-tiered jackpot game. The biggest jackpot, Grand, could be potentially worth millions. If you want to check them out, you can play DC Super Heroes games at Casino.com, which offers bigger bonuses and rewards as a VIP member. That’s important, because while you can play DC games for small bets and the jackpot award is random, bigger wagers have a better chance of winning a life-changing jackpot.

So, what’s the best example of these games, the gold standard of super hero slots? Like the movies, everyone will have their favorites. However, for a taste of the action, look no further than the Super Man II Slot. The game has plenty of footage from the Christopher Reeve classic, featuring loads of cool bonuses where Superman will battle Terence Stamp’s General Zod for cash prizes. It’s got the right blend of retro fun and ambitious modern special features, and makes a really good starting point for DC Super Heroes games. Other games that are top of the class include Justice League, Aquaman and Man of Steel. It should be noted that a movie that had a critically poor reception does not necessitate a bad casino game, and vice versa. 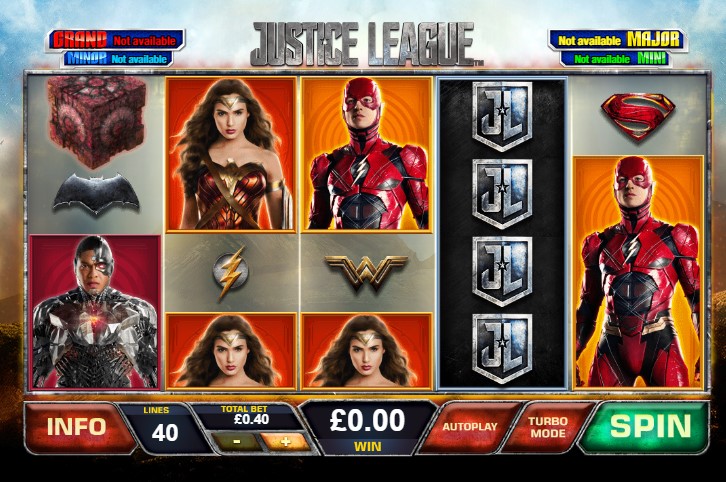 The good news for fans of DC Comics and casino players is that new games tend to come out not long after the movies have been released, so you’d expect to see the likes of Shazam! and other upcoming films getting the slots treatment soon.