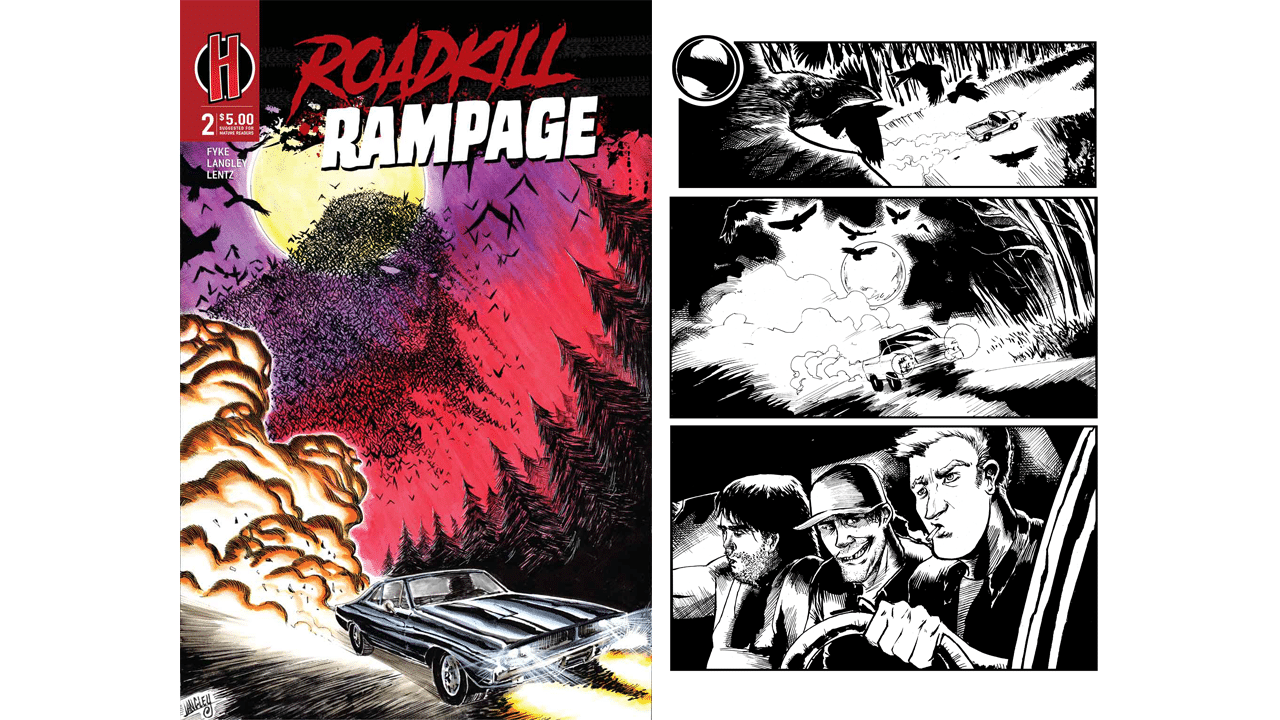 Hazzum Productions is a publisher based out of Independence, Kentucky. Roadkill Rampage is Hazzum Productions’s first comic venture into the horror realm. It is a bloody tale of revenge against an unknown evil. This issue is the second part of a scheduled four-part series. Issue #2 launches on Kickstarter on October 20, 2021.

Roadkill Rampage Issue #2 is a mature, horror tale following the journey of Tess after the horrific events in the first issue. Now alone, she ventures further into the forest, crossing paths with a group of guys that are linked to something more sinister than she could ever possibly image. Along the way she finds an injured dog and while trying to get it help uncovers there is more going than just a dog left on the side of the road. Faced with more questions than answers, she continues her quest to unravel exactly what the guys are up to and what evil lurks within the forest.

My two and the one we scraped off the road down by the creek where the gators hang out.

In the early ‘90s when I was writing/publishing Cry for Dawn, guy stopped at my table at a con with his portfolio, and I knew the minute he showed me his work, I had to publish him. Guy was Frank Forte, now doing work on Bob’s Burgers and HBO’s Lovecraft Country, projects like that. Eamon Hill is a guy whose work would have made me feel the same according to my wife, who’s opinion I trust. After all, she repped Bernie Wrightson and Basil Gogos.

Roadkill Rampage is the kind of story I would’ve tried to snag for Cry For Dawn (or later, The Night Terrors), because it’s got everything you want. A gritty, splatterpunk story, incredible art with a unique style, and plenty of the gooey stuff. As well, you get some neat pinups from other talented guys, including writer Rodney Fyke, some of the in-progress pencils/inks and panel design, a mini ‘Making of…’ look at what went into Issue #1.

I’m eager to see #2, which, these days? Probably the best compliment I can give a title.

The team at RAGIN’ had an opportunity to sit with Rodney Fyke and Tina McElhinney about the creative journey, some of the challenges and joys of the writing process, and using a business mindset for their comic books. Subscribe to our YouTube channel.

Rodney Fyke is a writer and illustrator from Cincinnati, Ohio.

He has five other self-published comic titles going back to the early 90s; including Superior Seven, Peanut’ Puddin’ n’ Jelly, Patter Patter, Unchained, and Roadkill Rampage. Rodney’s writing can also be found in Power Ninja Toons (Jolzar Entertainment) and Scarlett’s Field Guide to Cryptids and Other Creatures (Sean and Stephanie Forney).

He has worked on several projects for Upper Deck featuring licensed Marvel characters. He also appears on his weekly podcasts, Thursday Nite Throwdown and Friday Nite Draw, where he does live draws and sketch-offs with his co-host, Sean Forney. Rodney is excited to continue this tale of horror by bringing the second issue Roadkill Rampage to the readers.

He has contributed cover and concept artwork to various comics as well as numerous independent horror publications and authors, as well as producing regular horror/scifi artwork at Patreon. Shawn is a regular contributor for trading cards sets, supplying artwork for various collections from Upper Deck/Marvel Comics. More of Shawn’s artwork can be found at on Shawn’s Facebook page and Etsy shop.