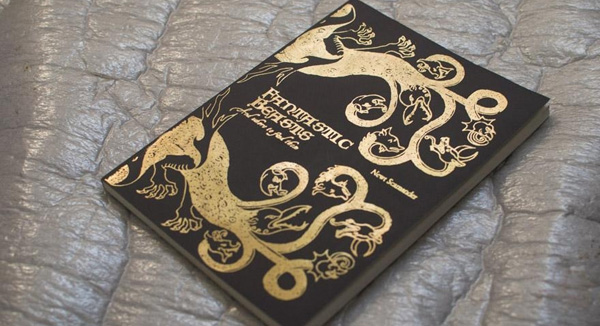 Harry Potter, “the boy who lived.” He survived seven books, eight movies, confrontations with Voldemort, being discredited by the Ministry of Magic and the awkwardness of the Yule Ball. But nothing could save Harry from the inevitable end. The series is over. We got a complete story arc and a happy ending as he and his friends faded out in the steam of the Hogwarts Express. His world was gone from ours until now. Harry may still be on the shelf, but Entertainment Weekly is reporting that JK Rowling and Warner Bros. will reteam with an “expanded creative partnership” to bring her companion book “Fantastic Beasts and Where to Find Them” to the big screen. Rowling will be making her screenwriting debut for the film. I probably looked odd running through the streets cheering when I first heard this news, but I don’t even care. The wizarding world is back!

The Adventures of Newt Scamander

“Fantastic Beasts and Where to Find Them” is first mentioned in “Harry Potter and the Sorcerer’s Stone (“Philosopher’s Stone” in England) as a textbook for Hogwarts students. The book was released to us muggles in 2001 having been written by Rowling with proceeds going to the charity “Comic Relief.” The book is labeled with the same fictional author that is attributed in the Harry Potter books, Newt Scamander, and apparently that is where the film will be based, with Scamander in a central role. Here are Rowling’s thoughts on the film via Warner Bros.

“It all started when Warner Bros. came to me with the suggestion of turning “‘Fantastic Beasts and Where to Find Them” into a film. I thought it was a fun idea, but the idea of seeing Newt Scamander, the supposed author of “Fantastic Beasts,” realized by another writer was difficult. Having lived for so long in my fictional universe, I feel very protective of it and I already knew a lot about Newt. As hard-core Harry Potter fans will know, I liked him so much that I even married his grandson, Rolf, to one of my favourite characters from the Harry Potter series, Luna Lovegood.”

She also says that the story will be neither a prequel nor sequel to the Harry Potter series. It will take place 70 years before “Sorcerer’s Stone” and in New York City. So it looks like we will get some American witches and wizards, which will be fun. To be honest, any wizard story would be fun. That’s what we’ve been saying since “Harry Potter and the Deathly Hallows” came out in 2011. We want more!

Rowling is a frustrating lady. She went and made one of the most successful fictional worlds of all-time with the Hogwarts saga. Then after a much deserved break, she came out with one of the most frustratingly strange follow-ups of all time with “The Casual Vacancy.” Then her secret mystery novel, “The Cuckoo’s Calling” was published under a pseudonym. She was subsequently exposed as the author and she was all angry as the book skyrocketed up the bestseller charts. Now after years of her shooting down questions about the future of the world of Harry Potter, we get what we have been asking for. Sheesh.

Harry, Ron and Hermione won’t have been born yet, so they of course won’t feature at all in the new series. But what about a certain wizard who lived to the age of 115? Dumbledore seems to have traveled the world a lot. He seems to know everyone. Maybe he came across Newt Scamander at some point. We know Rowling misses the headmaster, so I would say this is definitely a possibility.

While the internet is filled with conjecture at this point, it is understandable since Harry Potter fans weren’t sure if this day would ever come. For an incredibly minor character, we know quite a bit about Scamander. An expert in “magizoology,” Scamander graduated from Hogwarts and worked for the Ministry of Magic. After writing his memorable volume, “Fantastic Beasts and Where to Find Them” the book became a bestseller. He would go on to be headmaster at Hogwarts. What he looks like is a little harder to nail down. We have a few interpretations to choose from.

Take that already existing information as you will. Rowling could change it for the film or maybe just fill in the blanks with adventure and mystery. But with Hogwarts and the Ministry of Magic popping up in his biography, I expect some familiarity with the Potter series. That extends to the blast-ended skrewts and hippogriffs the character will be dealing with.

One thing we know for sure is that we are getting a new movie in JK Rowling’s world of witchcraft and wizardry. Beyond the movie, Warner Bros. also boasts that the agreement with Rowling will span “theme parks, digital initiatives and visitor attractions.” There is no word yet on when “Fantastic Beasts and Where to Find Them” will hit theaters, but just like we have seen with the return of “Star Wars,” I expect there will be no shortage of rumors related to the movie until it comes out. Expectations are high. Or should I say I “expecto great things-o.” …Give me a break, I’m excited!

Why Haven’t You Seen It? -Redline