Welcome anime fans, to another entry in Geek Insider’s series “Why Haven’t You Seen It?” Where we take a look at some of the awesome anime that you can find out there on the web for free. After watching the anime we’ve chosen this week I was left asking myself, Why hadn’t I seen it? Redline is all about racing cars…and other car like vehicles. If there is one word that comes to mind when describing Redline it has to be intense.

Redline is brought to you by by the same director responsible for Afro Samurai, Takeshi Koike. Koike is also known for his entry in the Animatrix titled “World Record.” It is in fact his involvement with the Animatrix that got me interested in Redline. His entry was one of my favorite out of the whole collection of shorts. In particular the animation style that was used really caught my eye, and I was glad to see a similar style in Redline.

The plot of Redline is a pretty simple one, that just has some bells and whistles tagged on for the hell of it. The most popular race in the universe is called ‘Redline’ and is viewed by most of existence. It is dangerous as it takes place on a chosen alien planet that changes every year, and has little to no rules. The protagonist, Sweet JP, qualifies for the deadly race and we go along for the ride. There isn’t a whole lot of juxtaposition or background given on anything in the film. You’re just sort of tossed in and expected to enjoy the bright colors and flashing lights, which totally works. 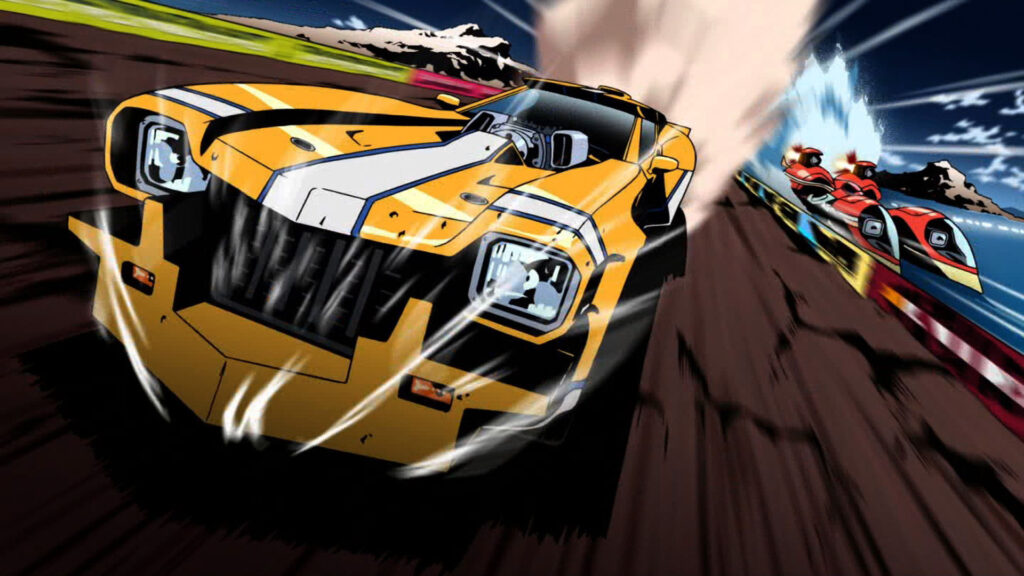 Redline is a bonanza of action, comedy, sexiness, and downright absurdity. As I watched the movie I was reminded of the Wacky Races and Speed Racer except with a heavy dose of Jojo’s Bizarre adventure. If that sounds like a hard to imagine mix then I’m not surprised. It is pretty hard to imagine the parts of Redline adding up to the exceptionally enjoyable film that it is. There is one thing that someone needs to know going into a viewing of this flick: don’t take it too seriously.

Red line clearly knows it is ridiculous and it absolutely revels in it. Cars are equipped with missiles, shape-shifting powers, lasers, jets and just about anything else you can imagine. Hovering cars race alongside cars with wheels, there are even some planes involved. Each racer is given a ridiculous character pulled right out of stereotype land and cobbled together for an amazing roster of characters. There is even one guy who fuses with his car into one being and a pair that drive a transformer style robot car. 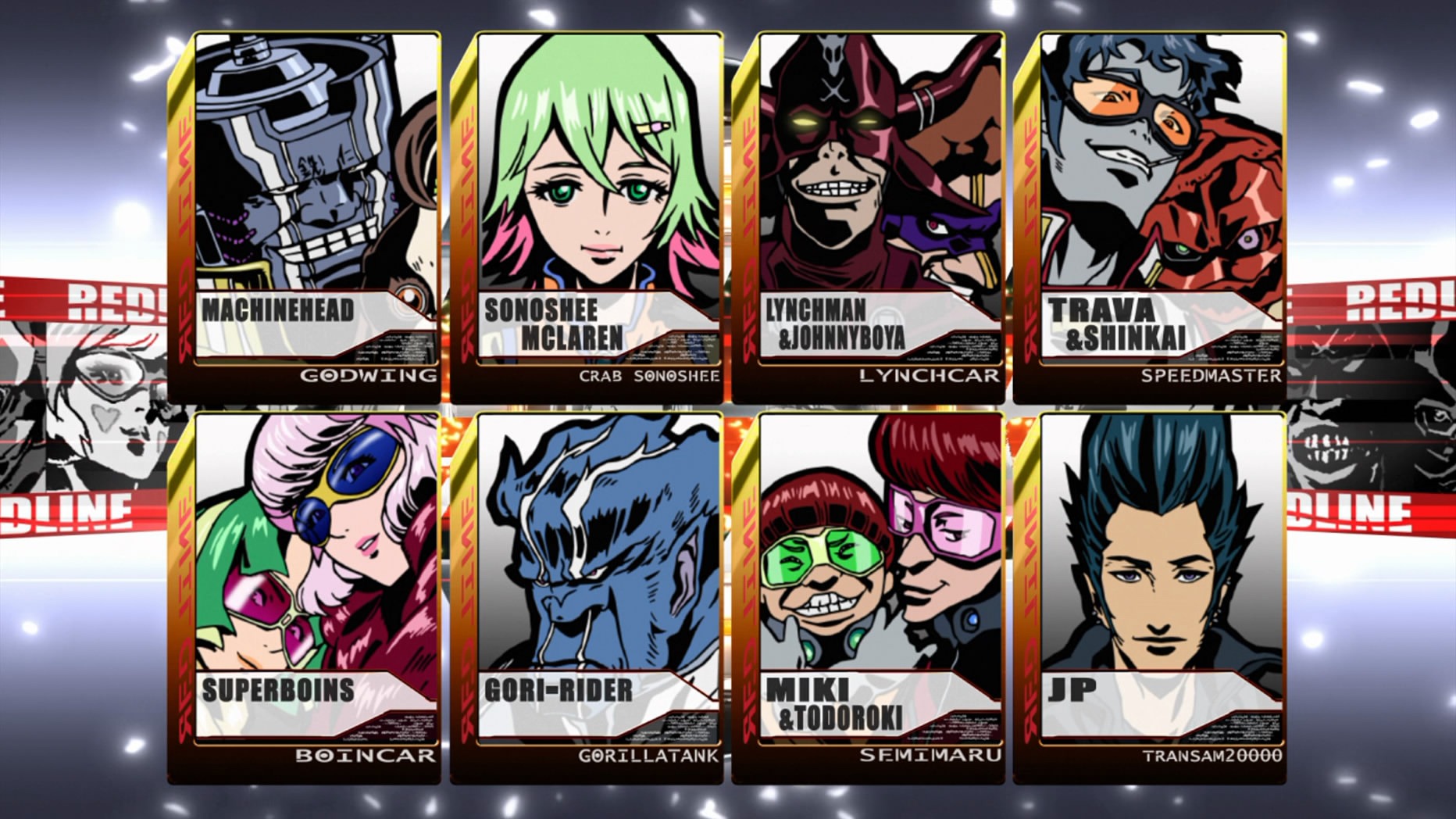 This anime bleeds visual panache from its eyes. It boasts an incredible art style that accentuates limbs and length. Since the anime focuses on racing they chose to show speed by elongated the art the faster the character go. It leaves the impression that the speeds they travel at are incredible and dangerous far better than “speed lines” have ever managed to do. Everything is brightly colored and flows beautifully without any choppy animations or slacked off backgrounds. Even the things moving around in the background look crisp and gorgeous.

The character design is perhaps my favorite aspect of Redline. Each racer is fleshed out and given a particular style that makes it difficult to confuse them. The crooked cop racer dresses in a skin tight police uniform and has a brick jaw. The two bounty hunters sport ridiculous costumes, one of them even looks a bit like Devilman. Sweet JP himself is a caricature of the 50s greasers with his leather jacket, absurd pompadour, and he speed around a little tricked out Trans-Am. That’s right, amidst robots, jets and hover cars there is a Trans-AM speeding along. 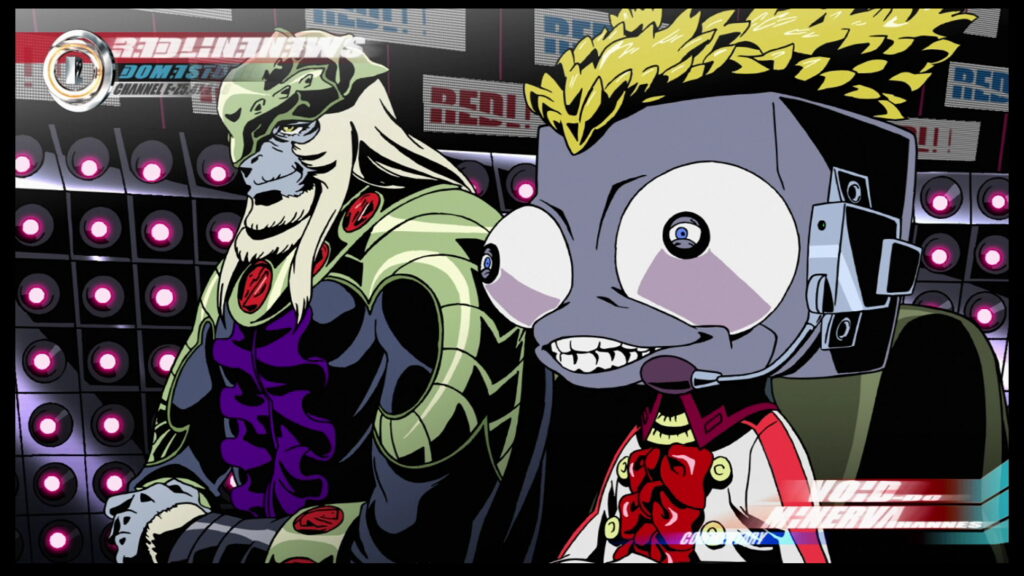 Even character who only make their way on screen for a minute or two are exceptionally designed. Not just visually either, the ones we get to hear speak and interact are all entertaining and unique. The variety of different lifeforms that are in this anime would make Guillermo Del Toro jealous. It is clear that they put a lot of time and effort into crafting every aspect of the film.

Redline isn’t without its flaws, mainly in the department of sexism. Every female character that appears on screen is over sexualized to a great degree. Two of the female racers are even referred to “reject cosplayers from a porn.” You could write this off as being another one of the anime dimensions that Redline has exaggerated, but it is something to keep in mind none the less. There is even a scene where the female love interest is basically just hanging out on a couch topless for no reason. That said, this anime is not for children. It is filled with every swear word you can think of, and as I mentioned contains nudity. If you are however a fully grown adult looking for a balls to the wall anime that you’ll never forget, then Redline is for you.

Hit the nitro with Sweet JP in Redline!