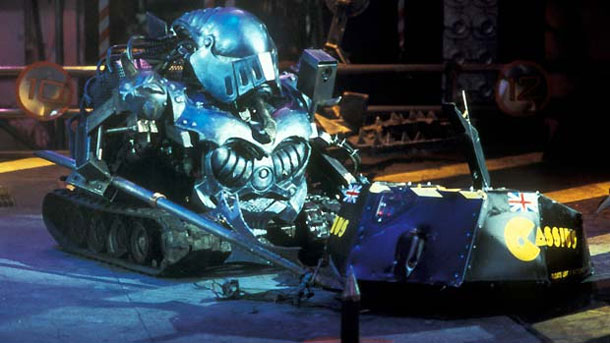 At the turn of the century – which is always a cool thing to say – before we had the grumpiest of cats and long before anybody was twerking on anybody else (topical references: check, and one for luck: Gangnam Style, British television went through an interesting phase. Over the course of a few years, we were inundated with attempts to put video games, or at least game-shows with videogame-esque elements on to our screens. 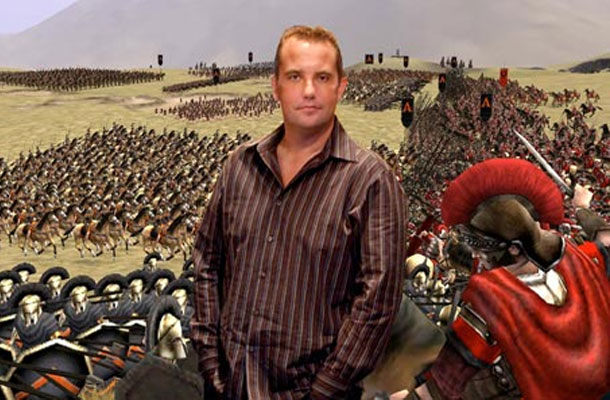 Games on Television- The Time Before Twerking

This was long before competitive gaming took off as a major event, before you could livestream a panel at E3 – instead these were done in series, with formats, and indefatigable hosts, at prime time on a major television network. And, looking back, they were totally surreal. Here’s three of my favourites.

Semi-videogame, semi-successful, totally pseudo-historical. Filmed, for reasons that escape me, in a shipping container, Time Commanders was a show where four military geniuses (read “completely inept members of the public”) would stand on various bits of a raised floor (again, I don’t know why) watching a game of Rome: Total War (the first one) on a screen.

The idea was to re-enact a famous battle from history (Roman invasion of Britain, Alexander the Great taking on Darius III of Persia etc.), using R:TW as the visual accompaniment. The team hear the situation, set up their troops (well, the two staff members actually playing the game on PCs at the front do), and then start the battle in all its weird pixellated glory.

Weird is an understatement. At 7pm on BBC 2, prime-time, it’s positively surreal to watch four co-workers from an accountancy firm shouting at each other, as copy-and-paste Gaul barbarians march in jerky animation towards Roman lines, while the narrator yells “CUTTING EDGE GRAPHICS”. Never mind the fact that every week they are, without fail, terrible at the game.

The whole experience is made all the better by the presence of a couple of actual military historians perched on the balcony overhead like a pair of spiteful vultures. They stay up there, sneering at the incompetance below before climbing down at the end of the episode to show how the team how it should have been done if they weren’t, you know… morons. Plus, it’s presented by Eddie Mair, a BBC Radio 4 veteran who has a voice like melting chocolate. I loved it when I was young, but rewatching it (it is, of course, all on Youtube) makes me wonder how on earth it got made.

Fightbox merged weird attempts at CGI, with physical elements like real contestants, an arena, and a somehow enthusiastic crowd. Basically, the BBC created a website where you could build your own monster/robot. If you completed trials on their site, you got the opportunity to take your creature to the TV show, where you controlled your character from a booth as they were projected onto the screen and competed in gladiator-like competitions such as puzzle-platforming and straight up fighting each other.

I first heard about it when the BBC were in my living room, interviewing my cousin for the show. He actually made it onto the series, and did pretty well, enough to get his creation, “Tenty” (a reference to Day of The Tentacle), onto the subsequent video game the BBC made – so, for the five of you who bought it, consider that an Easter egg next time you sit down for a quick FightBox session.

It didn’t last very long, and perhaps probably rightly so. It’s one of the only shows where the robots were more 3D than the presenters. Seeing a game character stand in a real ring with fledgling CGI being the only thing sustaining it wasn’t as awe-inspiring as the BBC had hoped.

Of course, the truth is FightBox was made in a doomed attempt to fill the void left by its much more successful predeccesor: 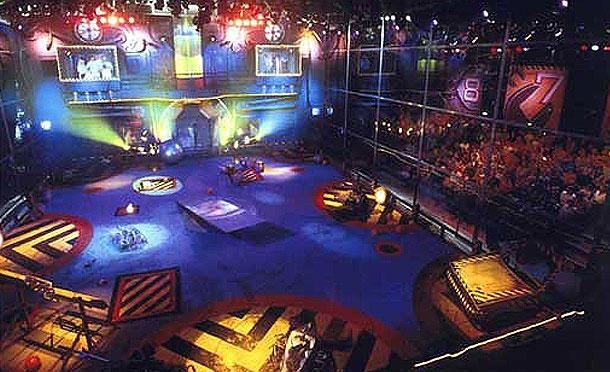 The closest we will ever get to legal dog-fights, Robot Wars was absolutely cutting edge (sometimes literally, ha-ha) for its time. If you don’t know, the premise is thus: people create a “robot” (A small, user-controlled vehicle usually on wheels), bring it to the studio – a flame-licked, spiky death trap of an arena that would make the Road Warrior proud – and make them fight.

Now, normally, this is just as excuse for someone to duct tape a kitchen knife onto a remote controlled car, but some of the engineering work on display was, at times absolutely mind-boggling. Teams like “Razor”, which featured a single, stainless steel pincer with remarkable crushing power come to mind. The ones built by the BBC team, circular saws, pneumatic axes, lances, were all complete violent insanity. I’m pretty sure one of their robots had a flamethrower.

True, Robot Wars was never really a video game, but it had all the elements of one. It was a multi-participant death match, with spikes, pits, spikey pits, and parts of the floor that flipped contestants across the room. Each match given colour by a notorious football commentator, and it was headed by Craig Charles (Lister from Red Dwarf), who presented manically; like he was getting high on the very fumes of the unfolding mayhem.

It was an embryonic idea of competitive gaming, meant for gear-heads as much as technophiles, and it rocked. Of course, any person from my generation has a mantra from this golden era of television: 6pm, The Simpsons, 6:30pm, Fresh Prince of Bel-air, 7:00pm, Robot Wars.