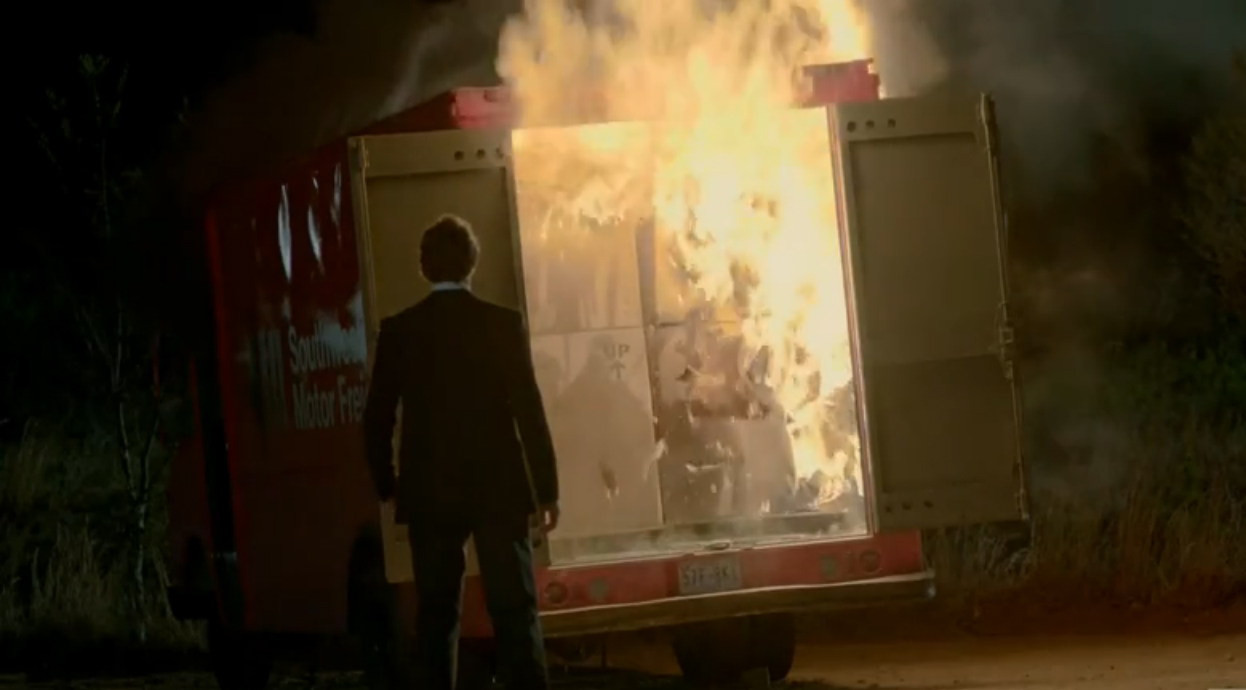 We’ve finally reached the end, the final episode of the first season of Halt and Catch Fire.  We’ve seen our intrepid trio of heroes scratch and claw their way through the tech industry from unlikely development team, all the way to grand innovators with their ironically titled Giant, the all-in-one portable PC.

We watched as Joe swindled his way into Cardiff Electric, carving out his own development team and guiding it to perdition, all through the slickness of his voice and the swagger to pull it off.  We saw the once meek Gordon, beaten down by past failures, reborn under the gospel of Joe, finding that spark that long simmered low and fight against all odds to prove that he could make something brilliant.  We saw Cameron, naïve to the business world and full of innovative ideas, brought to the heights of elation, finding love and admiration through her work with Joe.  We also see that through Joe, her world of love and brilliance come tumbling down as she and her ideas are tossed aside and her once marvelous love revealed to be unrequited.

And so now we have reached the finale.  With so much occurring around this tinderbox, just where will this show with an uncertain future end up?

“1984” opens as Joe (Lee Pace) and Gordon (Scoot McNairy), fresh off of a successful showcase at COMDEX, take one last push to force their way further up the ladder at Cardiff Electric.  Resulting in a portion of the company, the pair now seems to be in charge of the Giant’s future, not only its creation.  Now with official investments in Cardiff, the two have reached the pinnacle of their endeavor.  But with the two men reaping the success of their labor of love, just what has happened to their third?

Absconding back to Dallas, Cameron (Mackenzie Davis) ends up working for a telephone company of all things.  There, luck would have it that she quickly develops the idea that phone lines actually have the capability to be able to transfer much higher amounts of information over their lines than anyone is utilizing.  Through some careful overrides, she is able to take advantage of this revelation, leading her to quit the phone company and start her own.

As the first production models are shipped to Cardiff, a problem soon becomes apparent.  A number of the PC’s are projected to have a critical error amongst them, enough so that the team heavily considers a delay to fix the issue.  This plays into Joe’s hands as he is still reeling from the past episodes ending revelation that their intended UI that talked to the user through script may have been the way to go after all, despite him being the one making the final decision to cut it out.  Now looking for some type of killer app to annex into the machines software suite, Joe pushes hard for a later launch date.

Gordon is less than pleased to hear this news and strived come up with a way to stop Joe in his tracks and move forward with the original production.  With Donna (Kerry Bishe), they devise a scheme that would falsely threaten Cameron’s arrest, which would force the other man to relent.  Before Gordon would put the plan into motion, however, Joe would concede his idea of his own volition.

Prior to his talk with Gordon, Joe had visited Cameron in order to bring her back into the fold.  Pleading for her expertise and then for her love, Joe would be rebuked from the now jaded woman.  The refusal leaves lasting effects on the once confident man heavily, distracting him throughout the remainder of the episode.  As the other characters look forward to the future, enthusiasm rising in their hearts, Pace does well to effuse his scenes with a brooding dark energy about himself.

Furthering Joe’s decision not to pursue the software project any further was the departure of much if not all of the software team which jumped ship to join Cameron’s new company, aptly named Mutiny.  The company, using the revelatory software Cameron developed, would focus solely on game development specializing in games that incorporated communication between friends over the newly created network.

At the Giant’s launch party, a changing of the guard happens overnight, baptized in champagne and cyber dreams, the spiraling Joe recedes further and further into the background and Gordon’s transformation  reaches its final stages, culminating in shaving his beard just prior to the engagement.  It really is interesting to see just how much these two characters have changed as the season progressed.  In many ways, they have switched roles as the confidence gap has shifted from the self-assured man to the once repressive.

Once again giving life to the show’s title, Joe sets fire to the first shipment of Giant PC’s and the delivery truck along with it in his final goodbye to Cardiff Electric.  Gordon, the last man standing at Cardiff, though resurgent in his way of living, must go back to the drawing board as the lead on what the team must do going forward.  Donna, uneasy with the prospect of being a housewife and being a subordinate under Gordon, links up with Cameron’s startup to be able to help guide and mold this motley crew of misfits. The show ends with Joe setting off for parts unknown, on a quest to find himself and find just what makes him happy.

“1984” was a fitting end to the season that was so often emotionally charged and full of potential.  The melancholy, yet optimistic conclusion to the episode kind of left a bit of a sour note, though in the end for me, especially with the final act of Joe undoubtedly throwing a massive wrench into the Giant’s launch.  It had some great dramatic moments between this season’s two couples (Gordon/Donna and Joe/Cameron), which both were given some resolution to their arcs.  However, the hollow victory in the end made the conclusion all the more feel like a casual shrug rather than a fist held high.

Halt and Catch fire was a decent enough summer series that I will miss in some aspects.  The thing I will probably miss the most is the theme song, honestly, it being one of the best things I’ve seen and heard on a weekly basis.  It stands up there next to the Game of Thrones themes of best intros on TV, in my book.  After that, I really will miss the relationship between Gordon and Donna and the chemistry brought to the table by McNairy and Bishe, respectively.  Through them I felt what was at stake the most with this show and their nerdy banter really brought the most heart to a show about creating a machine.

Sadly, I was a bit disappointed most often with the uses of Lee Pace and especially Mackenzie Davis.  With Joe, they just left so much of his past to bluster and exposition; it was hard to really put stock into the character beyond the moments when Pace puts his entire acting prowess into showing that the character was shaken in a dramatic scene. A similar issue involves Davis’ Cameron, where in the beginning of the season they lent her so much expositional importance for her software skills, but relegated her to the background for much of the series afterward.  It seems she was intended to be that radical factor to throw into this mix of old school characters, but aside from a little flavoring here and there it seemed more like her story was only included to bolster Joe’s and not to stand on her own, at least not this season.  Davis did what she could for the writing, but I think it let her down in some respects.

Hoping for a Future

With the end of this season comes an uncertain future for this AMC series.  At the time of writing, the series has yet to be picked up for a second season.  Though the audience is given an open-ended conclusion, leaving the characters’ fates up to the viewers may be the route AMC will go for the series that never seemed to reach even Low Winter Sun ratings.  In the end, the series did well encapsulating the time period and providing an engaging romp in an era of big talk, fast cars, and just being on the cusp of the digital revolution.