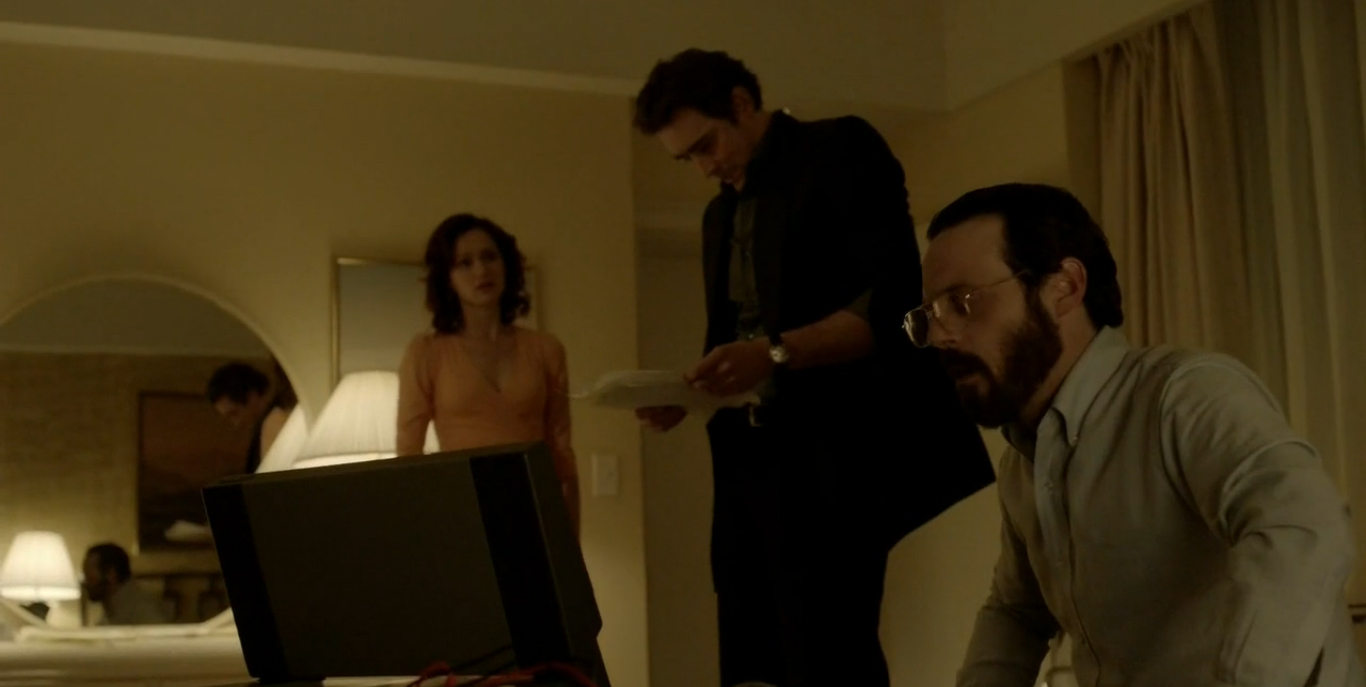 As ships pass each other through the night, Halt and Catch Fire continues cruising closer and closer towards its destination with the season finale only one episode away.  Before it gets there this series spends just one more episode to set up yet another hurdle for the Cardiff electric team, comprised of Joe, Gordon, Cameron, as well as Gordon’s wife, Donna, along for the ride to COMDEX, the industry exhibition showcasing the next new tech.  But it is never that easy for our heroes as their past always seems to catch up with them wherever they may roam.

With the pending criminal investigation from the last episode, the protagonists reach the conference unfortunately finding out that their spaces in their hotel and on the main floor in jeopardy.  After some finagling, they do get a place among their competitors, though with some issues with their actual product.  Last episode, Gordon (Scoot McNairy) intentionally dismantled the Giant in order for kit not to be confiscated and for his retrieval later on.  Putting it back together again, the hardware suddenly developed issues booting up for the majority of the exhibition, leading to Joe and Cameron to run interference as the hardware issues were ironed out.

For once, it seemed like Mackenzie Davis actually had some solid parts to play in this episode as Cameron.  The mischievousness that she brought to the character really came out as she created a thought-provoking graffiti art installation as a stand-in for their booth.  Though it would seem a large portion of her role this season continues to be in developing plot points for her relationship with Joe, rather than experiences that further her character along, she would have her moments later on this episode.

In the case of Joe, his talents came into play stalling for time as Gordon and Donna figured out just what was wrong with the Giant by playing host to their company’s suite party, fielding questions on their development process and also developing relationships with a possible distributor.  Busy with the attention his company and the Giant were getting, a somber jealous side of the fast talker was spotted as he gazed on at Cameron being talked up by a potential suitor.  Though his analysis of the situation would prove wrong later, this softness is a different side to Joe that only really came into play after his past relations were revealed a couple weeks ago.  Lee Pace’s performance, in one instance the smooth talking salesman, the next a concerned lover still finding his way in the world, play well to the conflicted nature of a character who shrouds himself in so much bluster and mystery.  Despite their perpetual hiccups along the way,  it would have seemed that all of their collective talents came together to finally triumph over this last big test of attrition.  And the day passes.

Gathering quite a crowd at their booth, Hunt Whitemarsh (Scott Michael Foster), Donna’s former boss, and Wally Turner (Griff Furst), Gordon’s friend and neighbor whom he fired teamed up together to create a replica of the Giant, theirs called the Slingshot.  It would seem that somewhere in the background, following their neighbor’s firing and Donna’s business trip the two had linked up together in this business venture.

Little is explained as to how these two spurned gentlemen came together, they are the perfect pair to bring together for the finale, though the lack of intersections between the two men would make this team-up all the more implausible.  Furthermore, their ability to have a prototype set and ready for the conference is equally hard to believe considering the only time the audience saw Hunt with the blueprints of the Giants was just a short time ago on the business trip.

Nevertheless, the new competitor, though lacking in total capabilities as the Giant, ran faster because the Giant took up so much memory when it came to its interface.  Seeing the speed difference and wanting the win overall, Gordon first makes the decision to cut the soul out of the machine to the dismay of Cameron.  Pleading to an unresponsive Joe, Cameron makes a final desperate call for the Giant to return to its previous form, but to no avail.  With no friends taking her side, Cameron again leaves to parts unknown.

More trouble arises as Donna is confronted by Gordon following the Slingshot’s debut, accusing his wife of a possible affair with Hunt.  Pushed against the wall, she reveals her attempt at infidelity, admitting that though it was a failing on her part, she was practically pushed to it for all of Gordon’s steadfast focus only on the Giant and nothing at home.  McNairy and Bishe play beautifully in the tensioned filled argument, exemplifying the passion that the two share for one another that just can’t seem to balance out with the work they also do together.

With their problems close behind them, Joe and Gordon showcase the Giant together; rebuffing the other machine and the idea of that theirs had a special UI, only mentioning that it is highly comparable to the best PC’s at the time.  Gordon finally gives Donna the credit that was due to her in the hardware configuration of the Giant which also brings their relationship forward many levels from where they had started earlier in the episode.

The episode ends on a tenderly sour moment as Joe is audience to an early Macintosh program, similar to their own UI that actually used audio to talk to the user.

Now if a lot of this plotline seems familiar, you might have already seen this on Silicon Valley, which used pretty much the exact same through line with this episode.  A little discouraging when it comes to originality, though this series prides itself more closely with dramatic portrayals, while Silicon Valley based much of its drama on comedic situations.

End of a Voyage

As the ship known as Halt and Catch Fire travels ever closer to its harbor, questions still remain to be answered for our heroes:  Where has Cameron gone?  Will Cardiff finally gain financial backing?  Have we seen the last of Joe’s schemes?  Will IBM show up to spoil the party?

One episode remains and all that can halt viewers from seeing the last of this fire burn are the days until it airs.  Let’s see where this goes and just for kicks please comment on your favorite moments this season.