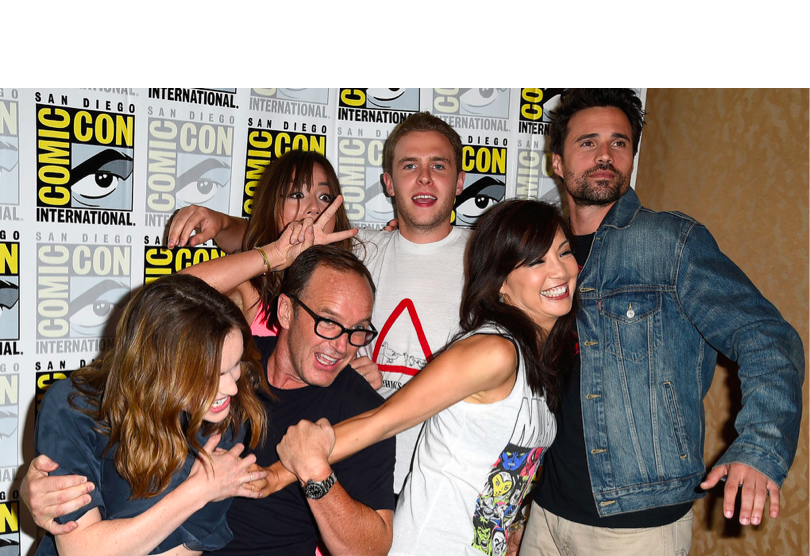 It hasn’t been long since the premiere date for season two of Marvel’s Agents of S.H.I.E.L.D. was released. As usual, Marvel is as secretive as S.H.I.E.L.D. itself, so good announcements are few and far between. However, thanks to the Agents of S.H.I.E.L.D  panel and interviews with cast members at Comic-Con, we now know a little more about season two. In other words, this article contains only very mild spoilers.

We already know that Coulson and his team will be focusing on rebuilding S.H.I.E.L.D. after the infiltration and subsequent battle with HYDRA. Clark Gregg says the team is “pretty ingenious about coming up with what they need” and that they are focusing on building up S.H.I.E.L.D. “one step at a time, back to something that can really protect people and be trustworthy.” S.H.I.E.L.D will be completely redefined, according to executive producer Joss Whedon.

What else do we now have to look forward to in season two?

Grant Ward, the double-crossing agent who answered to now-deceased HYDRA leader Garrett, is still alive. It’s very possible that HYDRA could rise again and attempt to wipe out S.H.I.E.L.D when it’s at its most vulnerable state ever. Brett Dalton (Ward) has hinted that there could be “someone even higher up” than Garrett was. It’s probably a safe bet to assume we will find out who this person is at some point during season two. Either Ward will reveal him/her in attempt to earn back Coulson’s team’s trust, or the mystery HYDRA leader will openly challenge Coulson.

One of the many unsolved mysteries from season one is who Skye’s parents are and what their, and her, full story really is. Executive producer Maurissa Tancharoen confirms that we will learn about Skye’s family, including the identity of the man with the bloody hand. Chloe Bennett (Skye) wonders aloud, “Could I be Jessica Drew?” aka Spider-Woman. That would be an exciting twist. Personally, I’m immensely looking forward to this story line, because it’s sure to develop Skye’s character a lot and bring her closer to May and Coulson, who will probably be helping her search through her past. The journey will no doubt be illuminating for Skye as well as the audience.

Three new characters and their actors were announced at Comic-Con. Actress Lucy Lawless of Xena: Warrior Princess fame will portray Isabelle Hartley in season two. Agent Hartley is veteran S.H.I.E.L.D. agent who will be assisting Director Coulson in his struggle to rebuild their organization. Nick Blood will be Lance Hunter, a mercenary hired by Coulson. Last but not least, bad guy Daniel Whitehall—aka Kraken—will be played by Reed Diamond. Could he be the mystery HYDRA survivor?

Additionally, it has been confirmed that Bobbi Morse will be joining the show, though the actress portraying her has yet to be announced.

Sparks were flying between Skye and Grand Ward during season one, but their budding relationship was put to a dramatic halt when Ward was revealed to be a secret HYDRA agent. When asked about the possibility of rekindling the romance, Chloe Bennett responds, “I don’t think they will be together this season. I don’t know how long it will take, but I think something will bring them together again.” Only time will tell if her prediction is correct or not.

As Director Coulson struggles to rebuild S.H.I.E.L.D. in 2014, Peggy Carter and Howard Stark will be founding S.H.I.E.L.D. in 1946. It’s great that these shows will be airing close to one another, because the parallels will certainly stand out. As Coulson works to make the dream come alive again, as Nick Fury challenged him to do, we will see the origin of that dream. This next season of Agents of S.H.I.E.L.D. will branch out from the comics and create new story lines for these characters. We will see a lot of development for each character, especially the fan favorites. During season one, the show had to directly fit in to Captain America: The Winter Soldier, but now the show can truly take its own path. Joss Whedon says, “In a way, it’s the first time we have our own universe to build that’s not just in the cinematic world they’ve already created.” The creative team will definitely still be pulling inspiration from the S.H.I.E.L.D. comics, but at this point the only thing we can expect is the unexpected.