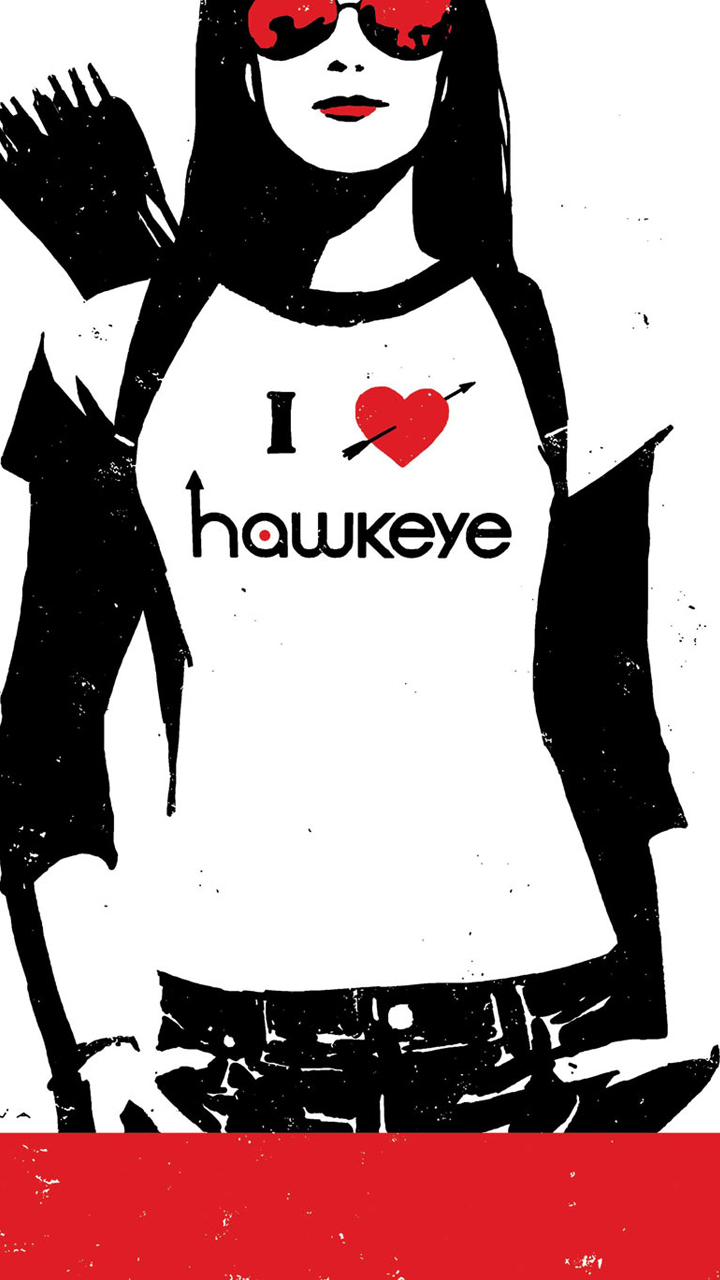 Welcome to the first entry of “Graphic Content”, a weekly feature where I discuss my thoughts on comic books and graphic novels (old and new), and the industry in general. While it’s undeniable that the quality and sophistication of comic books has greatly improved over the decades, many titles still cling desperately to the same tired cliches of plotting and presentation.

The Rise of Postmodern Comics

Marquee properties, such as the Avengers and X-Men, tend to reuse a handful of plots and themes older than most of the fans who follow their adventures. Sure, they might receive a fresh coat of paint, but in the end these titles almost always adhere to a strict and narrow plotting approach.

This aesthetic also explains why so many of the most popular comic book characters are ones created decades earlier, with only a small fraction originating in the 2000s have achieved lasting popularity.

While some of the blame for this situation can certainly be laid at the feet of comic publishers, who are unlikely to risk financing titles that deviate from the tried-and-true formula that has kept them in profits thus far.

But the fault is not the industry’s alone. We, as fans, have more than done our part to continue this policy of producing homogenous, redundant works. We’re no more likely to make risky investments in our comic books than Marvel and DC.

I get it, money’s tight, and most comic fans aren’t exactly wealthy oil tycoons. Why risk those limited funds on that odd looking indie title when you can just buy something like The All-Star Dark Knight Broods Again, because you already know you like Batman. People neglect a consistently exceptional, but clearly niche, title like Peter David’s X-Factor in favor of an X-Men comic where Wolverine proves he’s the best there is at arts and crafts…

NOTE: Whedon did it already, and it was AWESOME.

Every time we support a crappy, cliche comic book, just because it features Batman or Wolverine, we have made it that much harder for comics with a fresh perspective to get off the ground.

Which is why I’m so happy that Marvel has been putting out titles like Hawkeye and Young Avengers, as part of their Marvel NOW! initiative. Though I could reference many other titles, from various publishers, that are also raising the bar, for purposes of article length and my greater familiarity with these books, I’m sticking with just these two for now.

This week’s column focuses solely on Hawkeye, with the latter title being covered in the next installment 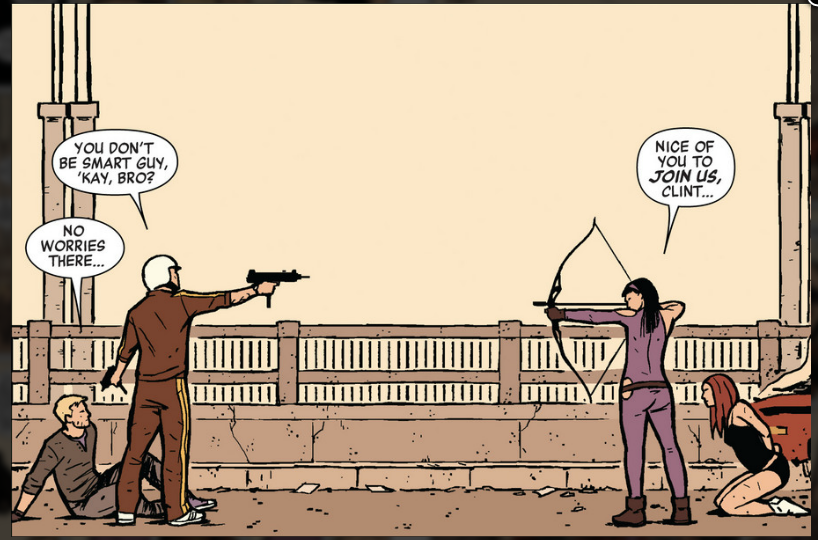 Despite being an unusual, even niche, title for a company like Marvel, Hawkeye quickly became an unprecedented success, thanks to the inspired creative team of writer Matt Fraction, penciler David Aja, and Matt Hollingsworth (whose minimalist color palettes give the series its distinct look, rather than just adding colors).

So, if you’re not familiar with the book, starring the Avenger marksman of the same name (and Kate Bishop, his young female ‘ward’ who shares the alias), what is this series about?

As the summary page in every issue so aptly states, Hawkeye explores what Clint Barton does when he’s not with the Avengers. Often, these stories relate to the kind of everyday struggles most people deal with regularly. Other times, we find our skilled, yet flawed, protagonist getting involved in all kinds of trouble involving Russian gangsters, femme fatales, and off-the-books missions for S.H.I.E.L.D.

Whatever an issue’s plot hook may be, you can be assured that it will be clever, witty, and at least a little skewed from the typical super hero tropes. Its influences go well beyond those of past storylines, and even comics in general, featuring shades of spy adventures, indie films, and smart comedies as well. 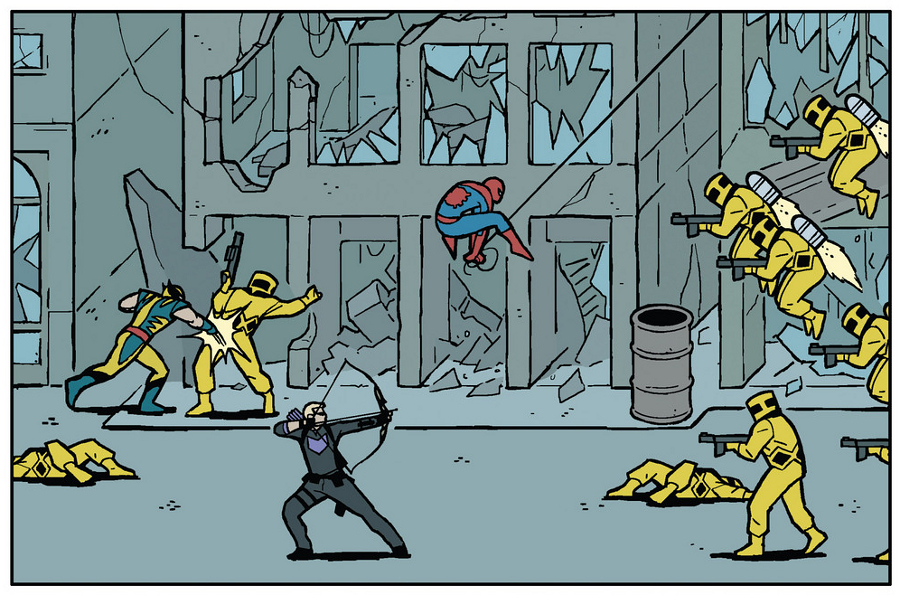 And apparently old-school arcade fighters, too…

Fraction and team are not afraid to try new things in the series, including non-chronological progressions and scenes that read differently depending on the context provided. Also refreshing is the emphasis on characterization over spectacle, particularly since the quirky chemistry between Barton and Bishop is so palpable in the capable hands of Fraction. 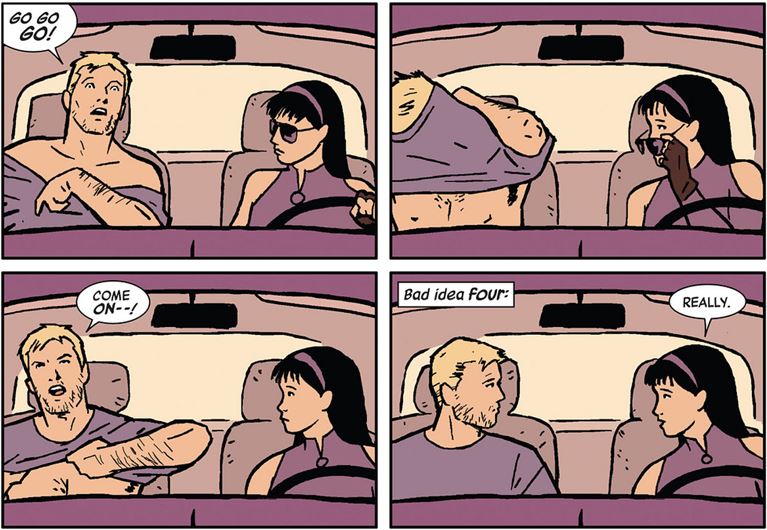 The events of a recent Hawkeye #11, were shown entirely from the perspective of Hawkeye’s rescued dog, Lucky/Pizza Dog. Fraction and Aja used the limited comprehension and enhanced senses masterfully to foreshadow and tease current and future developments in the series.

The unexpected success of Hawkeye is an encouraging sign for comic readers who are tired of the same old cliches, and encourages publishers like Marvel to take more risks in the future with fresher, ‘postmodern’ approaches to sequential art storytelling.