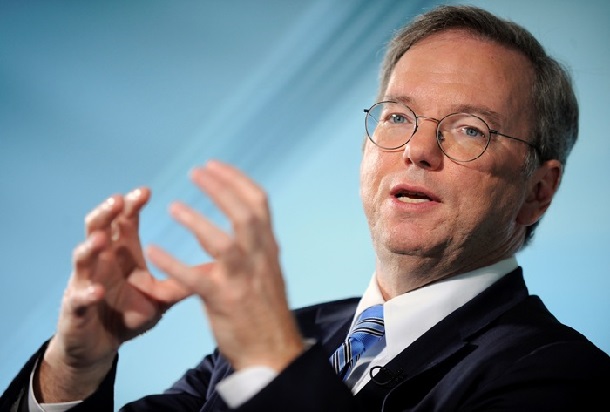 Eric Schmidt is a very important man. As Chairman of Google, he’s influencing some, or the other aspect of your daily life in an irreplaceable way. Gmail, Google Maps, an Android Device, and of course, Google Search. Some way or the other – you’re using a Google product. Soon, in the future, you could be using Google Glass.

Speaking of the future, Schmidt happens to have some far-reaching thoughts himself on how we will live our lives in the coming times. In his new book “The New Digital Age: Reshaping the Future of People, Nations, and Business”, Schmidt, along with Jared Cohen, makes some bold predictions about how life will be on Earth in the near future.

Let’s take a look at some of them:

The entire planet will be online by 2020:

According to Schmidt, with the rapid rise in mobile connectivity, everyone on the planet will be connected to the internet by the year 2020. He expects this to be caused by a steep drop is prices of smartphones – reaching a low of $20.

Mobile phones are transforming how people in the developing world access and use information, and adoption rates are soaring. There are already more than 650 million mobile-phone users in Africa, and close to 3 billion across Asia.

However ideal that may sound – it seems to be a far-fetched prediction. With many countries in Africa and Asia failing to provide basic necessities like water and sanitation to their people – a smartphone still remains a luxury. Meeting all these needs and progressing to universal smartphone affordability in just 7 years is a little too optimistic.

News organizations will remain an important and integral part of society in a number of ways, but many outlets will not survive in their current form — and those that do survive will have adjusted their goals, methods and organizational structure to meet the changing demands of the new global public.

True. Most of the breaking-news we receive today is generally from our social networking feed – which is then picked up by news organizations. Over time, this trend is only set to escalate – and websites like Twitter and Facebook will soon become our primary source of information. News organizations have adapted to this trend as well – with most of them posting such breaking-news updates on their own Twitter handles or Facebook pages. It is the only way to survive in this extremely competitive industry. Patience is now a thing of the past. The faster the headlines, the better.

Terrorism will remain stagnant – with both terrorist and counter-terrorist forces using the web to their advantage:

More connectivity will be a boon for terrorist organizations. With real-time sharing of information, it will become easier for terrorists to cement their negative impact on society, in ways more efficient than before. For example, Blackberry devices, with their encryption over Blackberry Messenger, can provide a safe way to transmit information valuable to intelligence agencies.

At the same time, however, the same technology will be used to counter these terrorist forces. Technology is going to make it increasingly easier to intercept information and act on terrorist activities – and such concepts will be a basic necessity. Blackberry was asked to install a server in Mumbai, India in order to provide security agencies access to messages sent between Blackberry devices.

But as the terrorists of the future are forced to live in both the physical and the virtual world, their model of secrecy and discretion will suffer. There will be more digital eyes watching, more recorded interactions, and, as careful as even the most sophisticated terrorists are, even they cannot completely hide online.

These predictions, among many others, are Schmidt’s idealizations of our future. Do you think he’s got them right?