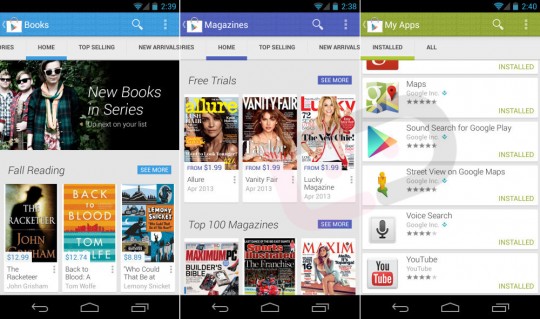 Google has been on a roll for the last couple of days. First they released a new note taking app, Google Keep, followed by a new Hangouts Capture tool for its Google+ service, and now we have seen something that looks like a completely revamped version of the Google Play store. While the current version of Play store is 3.10.14, guys over at Droid-Life have got their hands on a reportedly brand new version of the store that’s coming out pretty soon. They have received an apk that’s being dubbed as the version 4.0.16 of Google Play and it shows a brand new and completely revamped interface for the Play store.

We are still unsure what to make of this leaked app, considering the fact that Play store never leaks out unless it’s completely ready for a show. The apk received by Droid-Life could be a testing app and it is definitely not ready for a mass roll out yet.  It also has a couple of issues and doesn’t work flawlessly. Google has to work out all the bugs and glitches before rolling it out to the masses. This could be a sign that Google is working onto improve the visual aspects of the Play store app and will release the new look very soon.

This is not just a slight change in visuals like Play store has undergone over the past couple of months however; this is a shiny new look and a totally revamped version of the Play store. The whole interface has been changed and given an overhaul. They have brought the design more in line with their simple Holo design scheme. Everything looks quite clean and simple, all the colors have changed and fonts have changed too. Each category now has a bigger header but the color for each category stays the same, so you won’t be confused. Although, as you can see in the images header, colors look a bit grainy and aesthetically unattractive at the moment. Maybe the final look will be more polished?

If this leak is anywhere near real then we are totally looking forward to the new update. We love the new look. Everything is bigger, icons are larger and the whole focus is on the content, making it look much cleaner. All the apps share a similar look and when you look in the “my apps”  section you’ll notice that the listing is similar to Google Now cards.The large images for magazines and movies are bound to grab someone’s attention. Google has finally done a very great job with the Play store’s UI.

What are your thoughts on the new look? Do you think this will be coming out very soon or will Google offer the new look with Android 5.0 Key Lime Pie? Shoot a comment below and let us know.

Why Windows Phone Will Fail