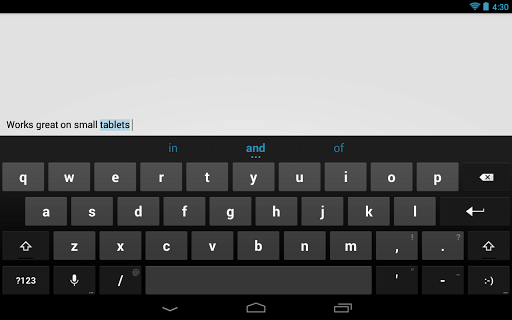 Google’s keyboard is no longer restricted to its Nexus devices. The search giant just made it available for all phones and tablets running Android 4.0 (Ice Cream Sandwich) or better. It is now available for download on the Play Store.

Google Keyboard is currently restricted to Nexus phones and tablets, with other OEMS like Samsung and HTC offering their own keyboards on their handsets. Not everyone likes those keyboards. If you’re one of them, you can now try out Google’s very own.

The keyboard comes with the same features available on the default keyboard on Android 4.2 Jellybean. These include:

Although it is available in 26 languages, the keyboard has only released to English-speaking countries right now. Google says it’ll be adding more regions soon. The app has already aggregated more than 100,000 downloads so far, and is carrying a rating of more than 4.5 on the Play Store.

Moving the keyboard to the Play Store will allow Google to collect information and usage-based data. This can be used to provide bug fixes and improvements much quicker, as an update will do it all, instead of upgrades to the operating system. Google has adopted a similar strategy with other apps – Gmail, Calender, Hangouts etc.

With Google’s backing, coupled with not-so-great keyboard experiences with other OEMs, expect wide adoption of this keyboard, and thus, a uniform experience for many users on Android – especially since it is now available for 4.0 and up.

The Google Keyboard can be downloaded from the Play Store here.