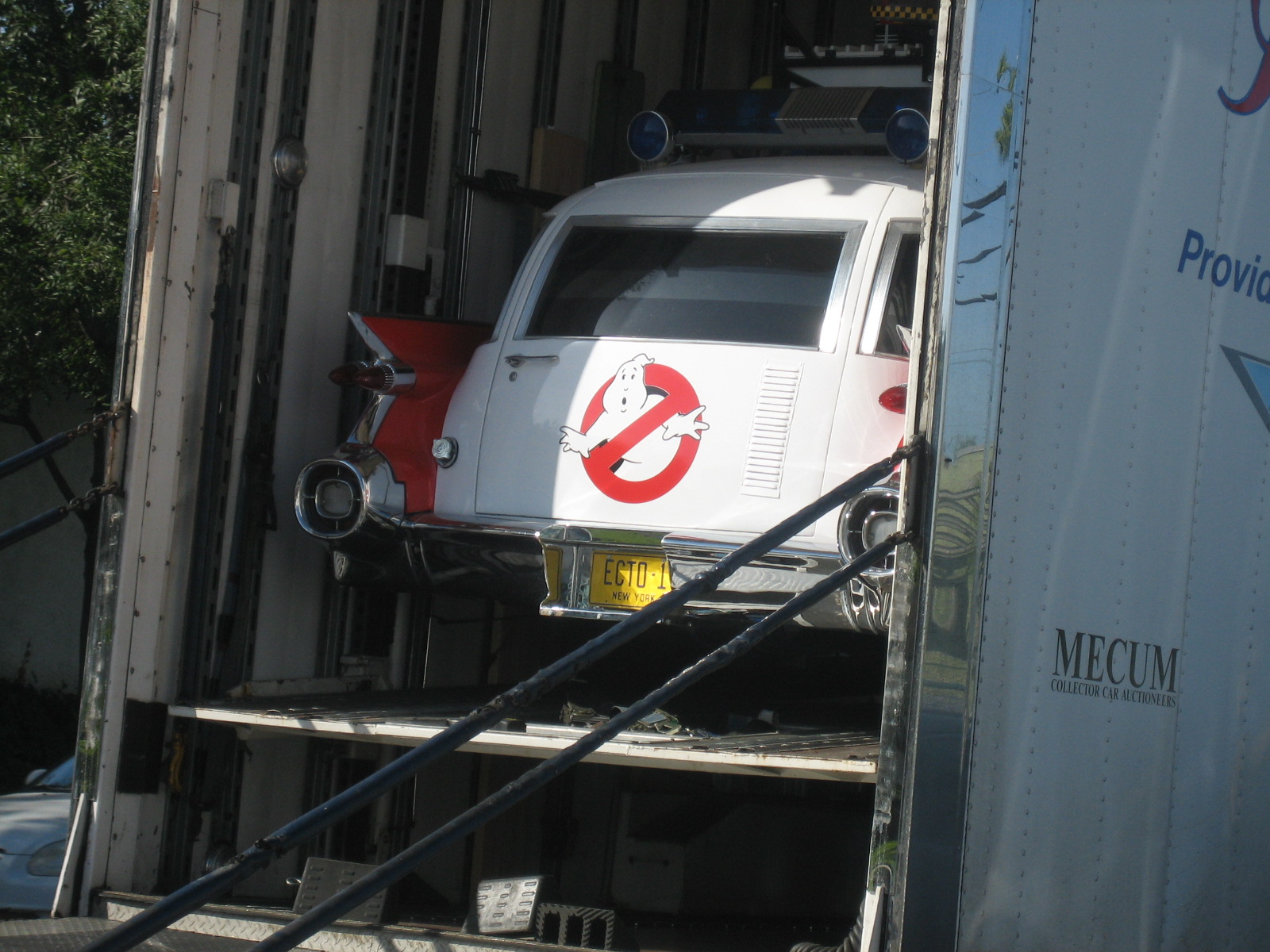 Originally covered by SlashFilms, screenwriter Max Landis wrote a fantasy Ghostbusters 3 pitch on his website, and it’s pretty damn good. There’s no telling what will become of the Ghostbusters rebooted franchise, but whoever is developing the screenplay should take some pages from Landis’ story. It outlines a plot that has the perfect blend of modern Hollywood while encapsulating the spirit of the first Ghostbusters movies. It’s got the same heart and potential for comedy and adventure as the first Ghostbusters, and pays respects to the late, great Harold Ramis in a creative way.

Landis Kills It with ‘Ghostbusters 3’ Intro

According to Landis’ philosophy on trilogies, his proposed Ghostbusters 3 would bring all three movies together, finishing the trilogy where it began. This is evident in the crossovers and parallels throughout his story that both directly and indirectly tie into the original Ghostbusters movies. The most obvious connection is his idea for the intro:

We start in the 1920s, where we witness cult leader Ivo Shandor proclaim the prophecy of the two comings of Gozer, one a failure, and the second thirty years later, to destroy the world. One of his followers speaks out, and is killed for his insubordination…becoming the spirit who is eventually known to us as Slimer.

In Landis’ story, the prophecy the original Ghostbusters found was only half right. Gozar was not actually The Traveler only The Guide for the real threat to the world: a God of Chaos known as Tiamat (think of Gozar as Silver Surfer. Gozar is the hearld to Tiamat). So, the prophecy was misread by Egon. There are two comings of Gozar, but the actual second coming is in 2016!

Now we need to remember something, at its core, Ghostbusters is a comedy, but it sparked an interesting fan subculture. Ghostbuster firehouses exist across the country like legions of Stormtroopers all going to cons showing off their props and tricked out ECTO mobiles. Their fanaticism has allowed for the successful launch of IDW’s Ghostbusters annual comics, a GB video game, and put money signs in Dan Aykroyd’s eyes when he looks to the future of a franchise reboot.

It’s hard to tell what Aykroyd’s ideas are about this reboot. All we know is that it’s an all female cast, it won’t tie into the first two movies, and we don’t know much about the official plot. The mere fact that the reboot is not tied into the first two movies is a major slap in the face to the dedicated fans who were able to keep the Ghostbusters franchise on life support.

His Pitch Appeases All Levels of Fans

As I see it, Aykroyd has three major audiences to appease if he’s going to do a third movie. There’s the hardcore fans I just talked about who’ve kept the spirit of Ghostbusters out of the containment grid, nerds like me who are interested in this type of story, but might not be an official Ghostbuster with all the cool homemade proton packs, and the everyday appreciators who remember and like the old movies.

This third audience of appreciators would be 80’s and 90’s kids who are now parents with kids of their own, who would have fun going out with their families to catch a Ghostbusters’ threquel because its something to do. They’re not going to care about the little details that Landis’ story provides, but that’s the beauty of his concept. It would be appealing to the hardcore fans and the everyman while at the same time, allowing Dan Aykroyd (who’s really the ultimate Ghostbusters fan) to complete the series and go out in a blaze of glory.

For the Hardcore Fans

Landis’s story has some clever satire weaved into the plot for hardcore fans to understand. In Landis’ GB world, the company went national, but despite the merchandise and the TV shows etc, the franchise was basically run into the ground by Ray Stantz (Dan Aykroyd) who still yearns for the old days when bustin’ used to make him feel good. There’s new gear and a Ghostbusters helicopter! Practically a Ghostbusters SWAT unit.

A Ghostbusters branded classic Volkswagen bus, ambulance, armored car, Chevy Chevelle, and 1975 Cutlass suddenly skid in from all directions, blocking off the street, as THE FREAKING GHOSTBUSTERS CHINOOK HELICOPTER swoops low.  That’s right: the one we heard about earlier.  IT ACTUALLY EXISTS.

Winston and Stantz, being the only two OG GBs (and the only two living actors from GB 1 and 2 who still want to be a part of the movie) show up and get to relive the ending of the first movie, which is not as good without Venkman and Egon, but Landis’ version does a good job of keeping their spirit in the film.

The death of Harold Ramis is obviously paralled in Landis’ story with the death of Egon. Egon’s daughter Veronica (who is a female Egon) has an interesting subplot where she wants to make contact with her father who’s on the other side:

Veronica touches Ray’s arm. “I wish my dad could’ve been here for this.” Ray looks at her for a moment, finally connecting with the friend he’d lost through his daughter. “Me too.”

[There’s so much more to it, you have to read the pitch]

Dan Aykroyd ruining the franchise is addressed with him setting off the catalyst for the return of Gozar. There’s also a tease that the original Ghostbusters will get back together at the end to save the day when Ray goes to call Venkman. This would make for a great cameo by Bill Murray:

Ray, in the meantime, has made his way back to the firehouse, to find it destroyed. He walks through the rubble of his life’s work, utterly broken. All those moments. Slimer in the ballroom. The TV commercials. The fame. The statue of liberty. He was a hero. They were all heroes. He picks up a photo of himself, Winston, Egon and Venkman, and tries to call Venkman.

We cut to Venkman who’s on the beach on a tropical island with his grandkids. He forwards the call.

That obviously mirrors Bill Murray’s reluctance to be a part of a new movie, but a cameo in this story, in that fashion, would be funny and something Bill Murray probably wouldn’t turn down. I’m sure fans would want more Venkman, but having a little Venkman is better than having no Venkman at all.

For the Everyday Theater Goer

IT’S WINSTON ZEDMORE, jump-suited up. He received the distress call Veronica Spengler sent earlier, and rallied every available Ghostbuster, flying them all in by private jet. And holy shit, it’s Nick Swardson, Amy Poehler, The Workaholics, Key and Peele, Lisa Kudrow, Nick Kroll, Amy Schumer, Will Forte, Patton Oswalt the list goes on, it’s the f**king Avengers of comedy in 2016.

No Seriously, Go Read This Pitch

Listen, I’m not doing this story justice. You have to read it for yourself all the way through. If Dan Aykroyd is so desperate to get a franchise going, I think that this pitch for Ghostbusters 3 is the closest thing he and the fans are going to get to a decent story.

I have the sneaking suspicion that Aykroyd is going to Lucas the Ghostbusters franchise Indy 4 style with a 3rd movie that’s going to try too hard to be different. If Ghostbusters 3 is to happen, it needs to pay some respect to the hardcore fans. Keep the same all-female cast, but follow Landis’ storyline. In fact, if any hardcore fans are reading this right now and are in agreement, maybe we should rally behind Landis’ version of the story so that it’s picked up!

Petition Dan Aykroyd @dan_aykroyd and Ivan Reitman @IvanReitman to hire Max Landis for this movie on Twitter, and share the the link for his pitch!  Tweet to Max Landis @Uptomyknees and tell him whether you liked the story or not, or share what you think of this pitch in the comments.