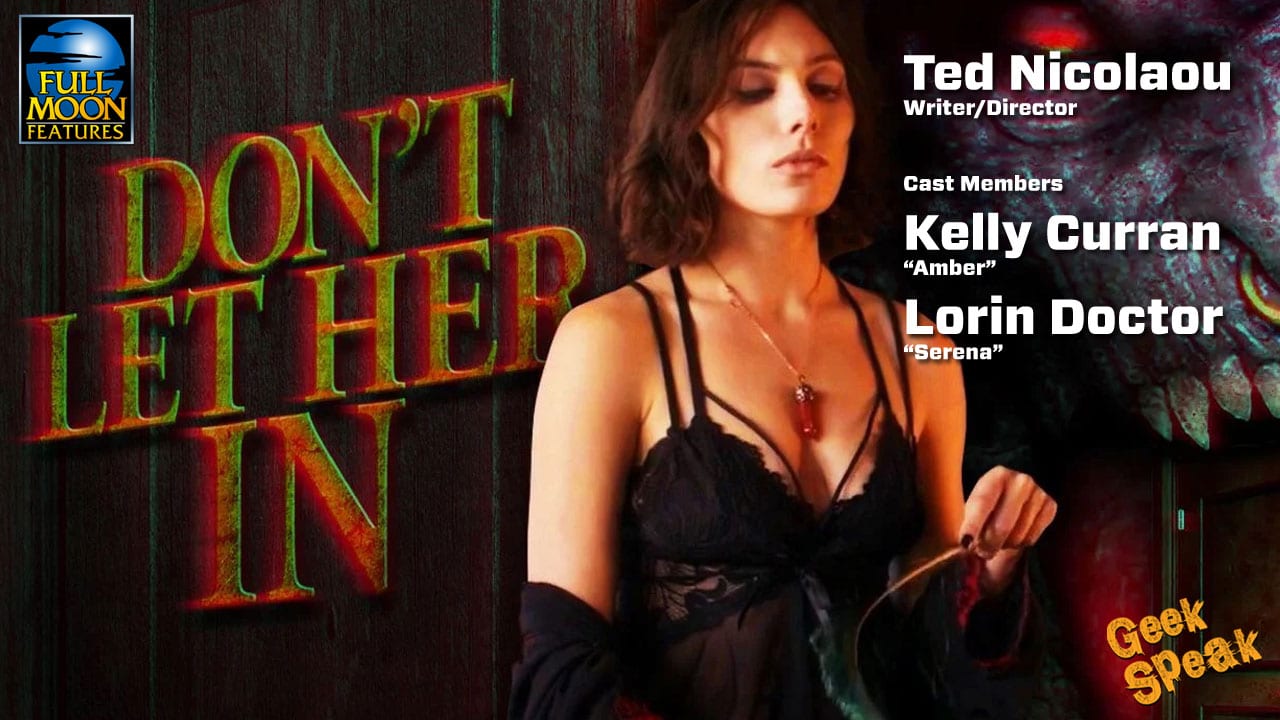 It’s time to Geek Speak with the members of  DON’T LET HER IN, a horror feature that is streaming on the Full Moon Features app. Today, we have the pleasure of sitting with writer/director, Ted Nicolaou, and cast members, Lorin Doctor, who stars as Serena, and Kelly Curran, who portrays Amber.

GEEK SPEAK at 9pm ET/6pm PT on May 10, 2021. Head over to our YouTube channel and subscribe, then hit the notifications bell for a reminder when we go LIVE for future shows.

Founded in 1989 by iconic independent film producer and director Charles Band, Full Moon is the successor to Band’s groundbreaking Empire Pictures Studio from the 1980’s. With Empire, Band created now-classic horror films like RE-ANIMATOR, FROM BEYOND and GHOULIES.

Band’s films helped launch the career of many of Hollywood’s biggest stars including Demi Moore (PARASITE), Helen Hunt (TRANCERS), and Viggo Mortensen (PRISON), to name a few.  With Full Moon, Band has produced over 150 films, including the PUPPET MASTER franchise, SUBSPECIES, PIT AND THE PENDULUM, CASTLE FREAK, DOLLMAN, DEMONIC TOYS, PREHYSTERIA!, EVIL BONG, and many more.

As well as feature films, Full Moon produces original series, toys, collectibles, merchandise, comic books and publishes the popular horror film magazine DELIRIUM. In 2019, Full Moon launched their most ambitious project to date with DEADLY TEN, in which 10 new feature films are being produced back-to-back all over the world with completely live-streamed shoots airing on www.DeadlyTen.com.

Each film will premiere on Full Moon’s streaming channel FULL MOON FEATURES as well as Full Moon’s Amazon channel and other digital platforms. In 2020, as Hollywood productions shut-down or were put on hold, Full Moon created a series of high concept exploitation pictures produced exclusively under the parameters of the quarantine, beginning with the satirical and hugely successful CORONA ZOMBIES and continuing with BARBIE AND KENDRA SAVE THE TIGER KING. Each comedic film includes re-dubbed footage from obscure exploitation films along with new footage and existing news footage, to create surreal and socially irreverent exploitation entertainment.

Geek Speak is Geek Insider’s flagship podcast and we’ve had the pleasure of sitting with many people who’ve worked in the Full Moon Features franchise, including Charles Band!