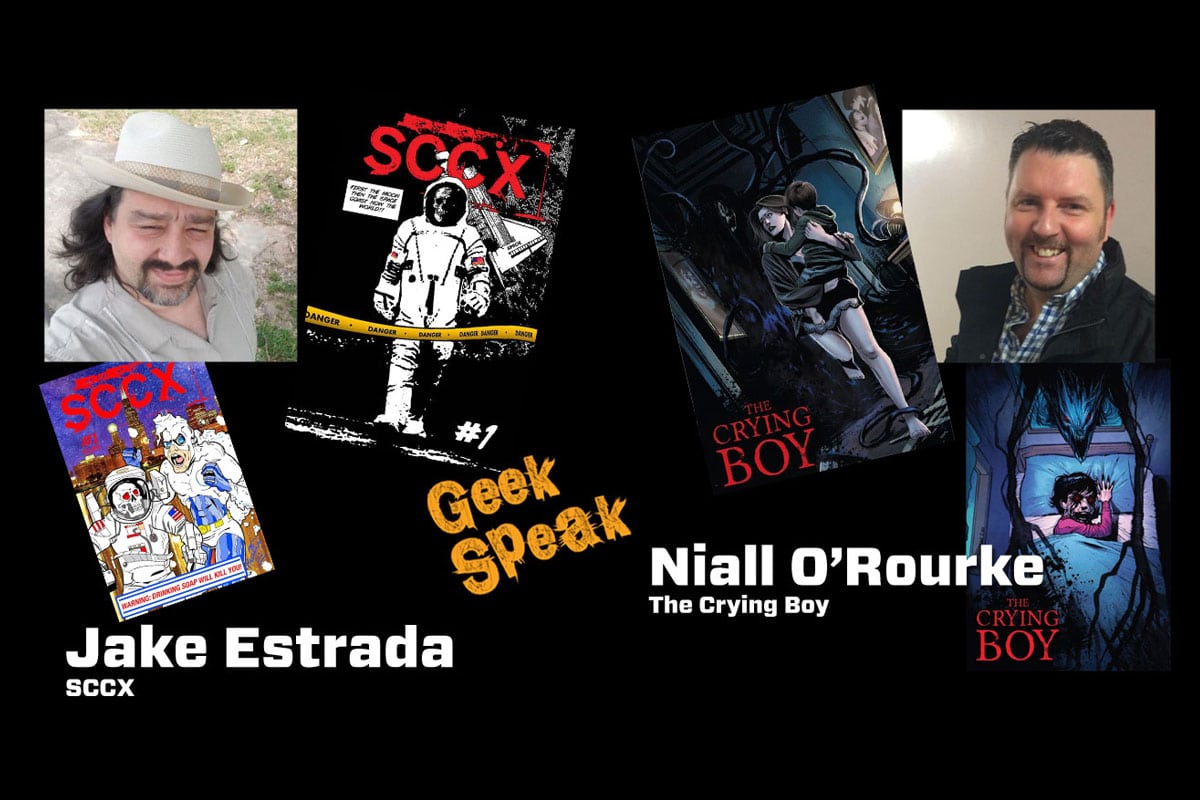 On May 3, 2021, co-hosts Meredith Loughran and C. Michael Lanning sat down with creators Jake Estrada and Niall O’Rourke for a little Geek Speak Comics Talk. We dive into their projects, crowdfunds, genesis story, collaborating with fellow creators, and the creepy, crazy stories that inspired their creative journey.

Jake shares about The Underpresence, his pursuit of making movies and comics, and his up and coming release: SCCX #1.

Niall joins Geek Insider for the first time to talk about his first crowdfunding experience, and how he found a gem among artists to make his book The Crying Boy come to life.

Geek Speak is our flagship interview show where our co-hosts sit with people in all things geek. If you can geek out about it, we will talk about it. Subscribe and share our YouTube channel and tune in on your favorite listening app.

Co-host of Geek Speak, Meredith Loughran, had the opportunity to meet up with Jake during Space Coast Comic Con 2020 (before the world shut down), and he’s been a part of the GEEK experience since then with his appearance in Geek Out Virtual Con, and subsequent interviews to talk about his projects in small screen, movies, and comics.

SCCX finally returns to the print. SCCX is Space Coast Comixx’s classic anthology format where there are various short stories that will play out in the very comic itself. First up is the triumphant return of SPACIE aka THE DEMON IN A SPACESUIT storyline. Spacie was a spaceman from another reality who wanted to recreate the world in his own image. Also in this comic is the return of legendary Nino Mesarina’s THE UNBELIEAVBLE LAUNDRY DETERGENT MAN. This is an exciting time to pick up this awesome brand new issue as two classic comic book characters make their anticipated return. Plus in this issue we have an amazing short story written by Colby Pryor.

Niall O’Rourke is originally from the Northside of Dublin and has been based in Queens, NY for the past 22 years. With a lifelong dream of breaking into the comic book industry, he has now embarked on the creator-owned path with this Kickstarter campaign. Along with Rob Moran, a Scotland-based professional illustrator who has worked for Marvel/2000ad/Dark Horse/Image Comics, they are realizing this nightmare of a supernatural horror story, The Crying Boy.

The greatest stories that I can remember were told to me as a child by my father. The TV would be switched off and my family would all sit in the glow of the fireplace imagining we were in a remote cabin in the woods rather than in a Northside Dublin corporation house. “If you misbehave, Johnny McGory will whisk you up to the Dublin mountains and lock you up in a woodshed!” That story and others like it made for some interesting nightmares, and they’ve stuck with me to this day. With “The Crying Boy” we will creep into the dark corner of the room where you think you saw a shadow move… We’re going to walk down the hallway to find out what that noise was… You’re going to be scared as hell… but it’s too late to back out now!

If you’re a fan of classic Horror films like The Exorcist or The Conjuring then prepare yourself for… The Crying Boy!

If you’re a fan of classic Horror films like The Exorcist or The Conjuring then prepare yourself for… The Crying Boy! This modern-gothic, supernatural horror story set in Queens, NY, follows Nadia, a young widow and her son Samir as they move out of  Brooklyn following the brutal murder of her husband. Relocating to an apartment in Forest Hills, Queens, they find an old painting of a sad, young boy presumably left by the previous tenants. Samir is drawn to the painting but it is far from a depiction of innocence— it is the vessel of an ancient evil… a demon. All who fall under the painting’s spell suffer torment as the demon tries to enter the physical realm by possessing Samir. Will Nadia be able to overcome her fear and depression and save Samir? Find out in The Crying Boy!