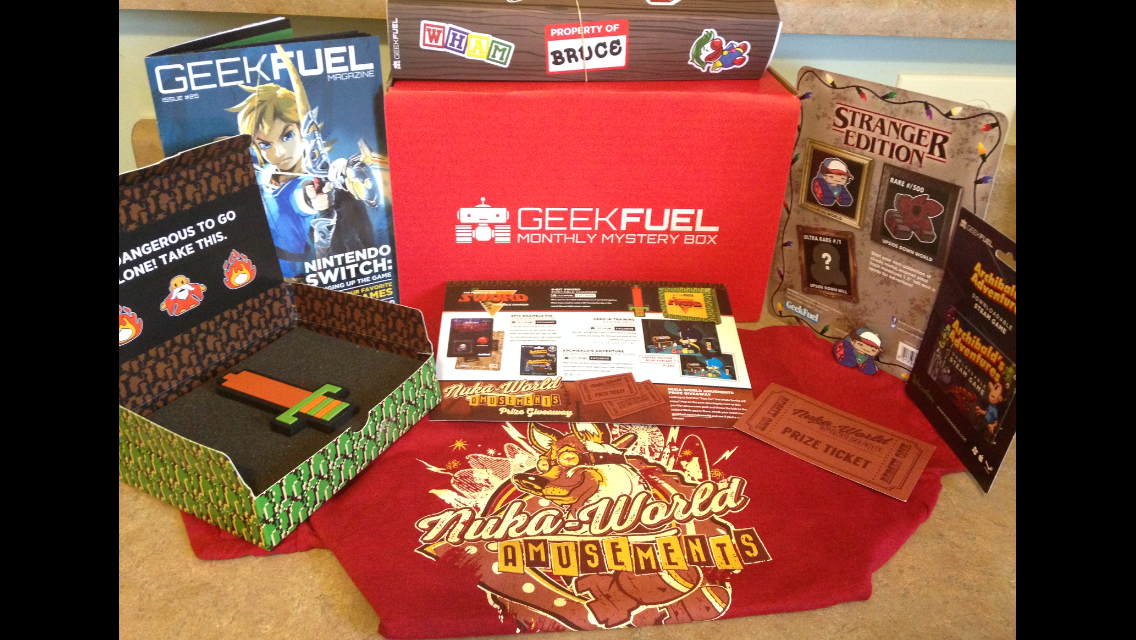 Geek Fuel is a subscription company that sends you a Monthly Mystery Box filled with everything you need to feed your geeky lifestyle. Each box contains an exclusive t-shirt, collectibles and toys plus a downloadable Steam game. You can get the box reviewed in this article until the end of the month for $24.90 (including shipping). You can also choose a 3, 6, or 12 month subscription to get your boxes at discounted rates. Not too shabby when you consider that each box is valued at $50, minimum! On top of that, you can use our link to Geek Fuel’s website and get $3 dollars off your plan!

February’s box is my first ever Geek Fuel Mystery Box, and I was thrilled when I saw it on my doorstep. Opening it up, I was greeted by Link looking up at me. I had to try really hard not to be too much of a Zelda fangirl about it. Link is front and center on this month’s Geek Fuel Magazine, which also includes an article featuring the Nintendo Switch.

Only a couple more weeks before it launches!

The box contains a handy card displaying each item that comes in it and gives you a little information on them. As you can see, it’s a varied lot that can appeal to more than one of your fandoms.

February’s exclusive t-shirt is inspired by Nuka-World, which is a Fallout 4 expansion pack. The recurring doggy companion in the video game series is featured on it, looking rather dashing in his goggles. Even if you’re not into Fallout, he makes the shirt look both cool and adorable. The material seems like really good quality too.

I didn’t really expect to see anything on the back but was pleasantly surprised by the Nuka-Cola cap on. What a spiffy shirt!

There’s also a Nuka-World Amusements ticket in the box. You can enter your number to see if you’re a lucky winner of a Fallout themed giveaway that includes an Xbox One. I was not a winner, so your chances have upped slightly if you get your own box.

We’re back to something Zelda, again, with this fancy box within a box.

Seriously, the box is almost as cool as what it contains. It’s captures walking into a cave in the Legend of Zelda perfectly (minus the ominous tune). Your prize when you enter is an 8-bit portable charger in the pixelated shape of Link’s sword.

This exclusive power bank comes with a micro USB connector which I immediately tested out. After letting it juice up a couple of hours, I used it to charge my phone and was very happy with its performance.

Another lovely wrapping example. This covered the poster that comes in the box.

The poster print features everyone’s favorite tech-savvy hero in toddler form. The future Batman villains are much cuter in toy form. Baby Batman can come in the rarer Limited Edition Blue Variant, as well. This Geek Fuel exclusive comes with a Certificate of Authenticity to flaunt around your friends.

These boxes have pins that feature characters in the form of the Geek Fuel mascot. The pins are quite unusual, and a collection of them would certainly draw attention to whatever object you pin them on. Or you can display them on a shelf in their cool packaging. This month’s edition is Dustin from Stranger Things.

But, you could be 1 of 500 to get an Upside Down World pin with the Demogorgon on it. Or be crazy lucky and get the 1 Upside Down Will pin.

Last, but not least, is the downloadable Steam game, Archibald’s Adventures. It seems that the hero, Archie, is trapped inside of a mad scientist’s mansion where all kinds of crazy creatures are running rampant. If you like puzzle games, then this side-scroller is for you.

February’s Mystery Box did not disappoint! Geek Fuel did a great job assembling a variety of items to appeal to all their geeky fans. Even the packaging is top-notch. As far as value, just the shirt and the portable charger are more than worth the cost of the box. If you’re sold on this box, snag it before it’s too late. These bad boys do sell out. Just make sure you use this link to get your $3 off!