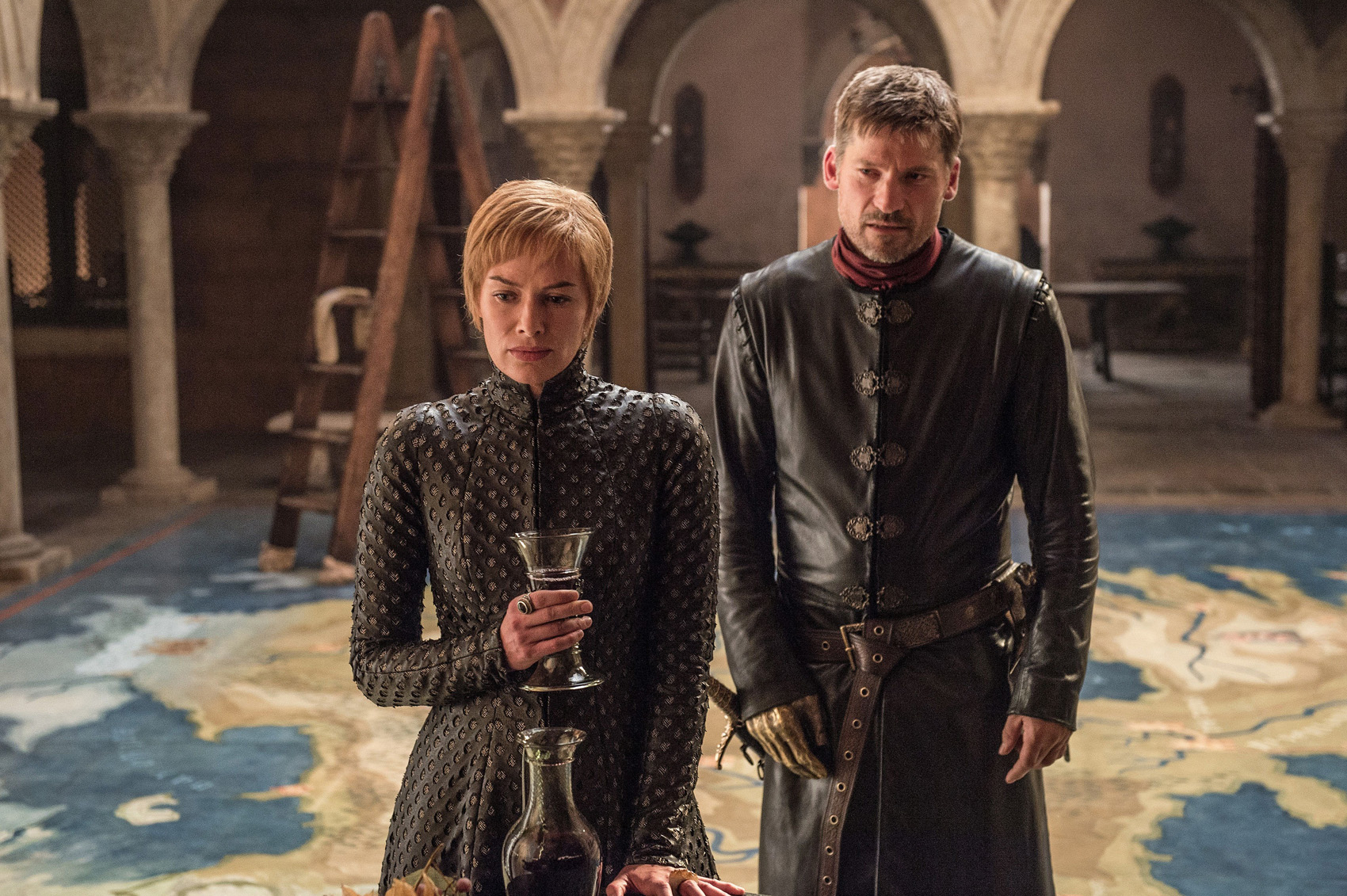 Sure I rewatched all of the seasons and the blu-ray extras. I read all the articles and watched all the trailers on repeat. But it felt like Game of Thrones season 7 may never come. Even as social media swelled this past weekend with random acquaintances posting their favorite quotes in anticipation. It wasn’t until we cheered a teenage girl murdering a family’s entire male bloodline, that it felt real. It’s the dark, twisted, bloody, awesome world of Game of Thrones. We’re back in it now and every second was amazing. Here is our recap of the season 7 premiere.

Everything began with a rare cold open scene playing before the credits. Immediately we know something is up because there is Walder Frey toasting his family. Arya already killed him at the end of last season. My immediate thought was a flashback to the “Red Wedding.” But nope this is the present day. Walder has called every Frey of import to this feast and subsequently toasts them with some special wine. Well guess what! The wine is poison and you all gon’ die! Walder shifts his speech to listing off the atrocities of the “Red Wedding” as all of the men are keeling over. Walder pulls off his face to reveal Arya. She turns to Walder’s young wife. “When people ask you what happened here, tell them the North remembers. Tell them winter came for House Frey.” (Tom, the author of this recap, is now pumping his fists in the air in celebration. He inexplicably gets off the couch and starts marching around the room. The opening credits begin.)

Let’s get back to the episode. Arya also had a second scene. This one is a bit less bloody. While riding through the woods she comes across a group of Lannister soldiers. Ed Sheeran is there singing because why not? Arya eyes up their weapons, but they actually have a nice conversation. The soldiers offer her some food and discuss their families back home. Arya tells them she’s going to King’s Landing to kill the Queen. But they just laugh that off. The scene ends there. Did Arya eventually kill them all? Possibly, but they seemed pretty decent. Maybe we’ll see next week.

A lot is happening in the North, but not much action yet. Through a Bran vision, we see the White Walkers and the army of the dead slowly marching about as they do. But what makes this time different is the sheer size of the army and also the handful of undead giants mixed in among their ranks. That’s going to be a problem later on. Bran comes back to his present surroundings in time for Edd to grant him and Meera access to Castle Black. Edd is taken aback when Bran knows about the White Walkers Edd saw at the Fist of the First Men and Hardhome in the past.

Jon is still getting the hang of the King in the North title at Winterfell. In a meeting with all the important lords and ladies, Jon talks about building up their ranks to prepare for the coming battles. He wants to include both young boys and girls when possible. Lord Glover questions the girl part of this command, but Lady Mormont, who spits proverbial fire, quickly puts him in his place. “I don’t plan on knitting by the fire while men fight for me.” Jon asks Tormund to take the Wildlings to the Night’s Watch castle of Eastwatch-By-The-Sea to build up the Wall and man it for an impending White Walker attack. Some folks seem less than thrilled with the prospect of Wildlings doing the job of the Night’s Watch. The real conflict of the scene comes when Jon and Sansa debate what to do with Last Hearth and Karhold, the castles belonging to the Umbers and Karstarks. Both houses fought with Ramsay in the Battle of the Bastards. Sansa wants those families removed and replaced with loyal Stark allies. Jon replies by saying “Sansa, be quiet. You’re annoying.” Okay, he didn’t say that. But he should have. I should write for this show! Jon asks the children who are now lord and lady of those castles to step forward and bend the knee to House Stark. They seem thrilled to do so. Afterwards we get some smaller character moments in Winterfell’s courtyard. Brienne is training Podrick. Tormund is creeping on Brienne. Little Finger is creeping on Sansa. Sansa tells Jon he can’t ignore Cersei’s threat after the Queen sends a message telling him to come to King’s Landing and bend the knee. He’s got bigger fish to fry, lady.

Speaking of Cersei, with enemies on her every side, she shows her support for art programs by having a giant map of Westeros painted on her floor. Jaime comes to visit and looks a bit befuddled. That’s kind of his trademark look now. He points out that they have no allies and a bunch of enemies. But Cersei’s got this covered. She has a grand plan. No one can beat her and… EURON GREYJOY! That’s the plan. She wants to join up with the traitorous King of the Iron Islands. The guy has ships and literally nothing else. I guess they can shoot saltwater at their enemies. He has a fun, yet insulting, interaction with the Lannisters in the throne room. Cersei declines his marriage proposal before Euron promises a gift that will earn her trust. I’d believe him. He’s got a new look. The guy-liner and tight black clothes make it look like he just finished filming a Green Day video. It’s good to get some side-work with Westeros’ shaky economy.

(Let’s check back in on Tom. He is now sword fighting the air with a lamp. His dog is barking at him. It’s pretty sad actually.) 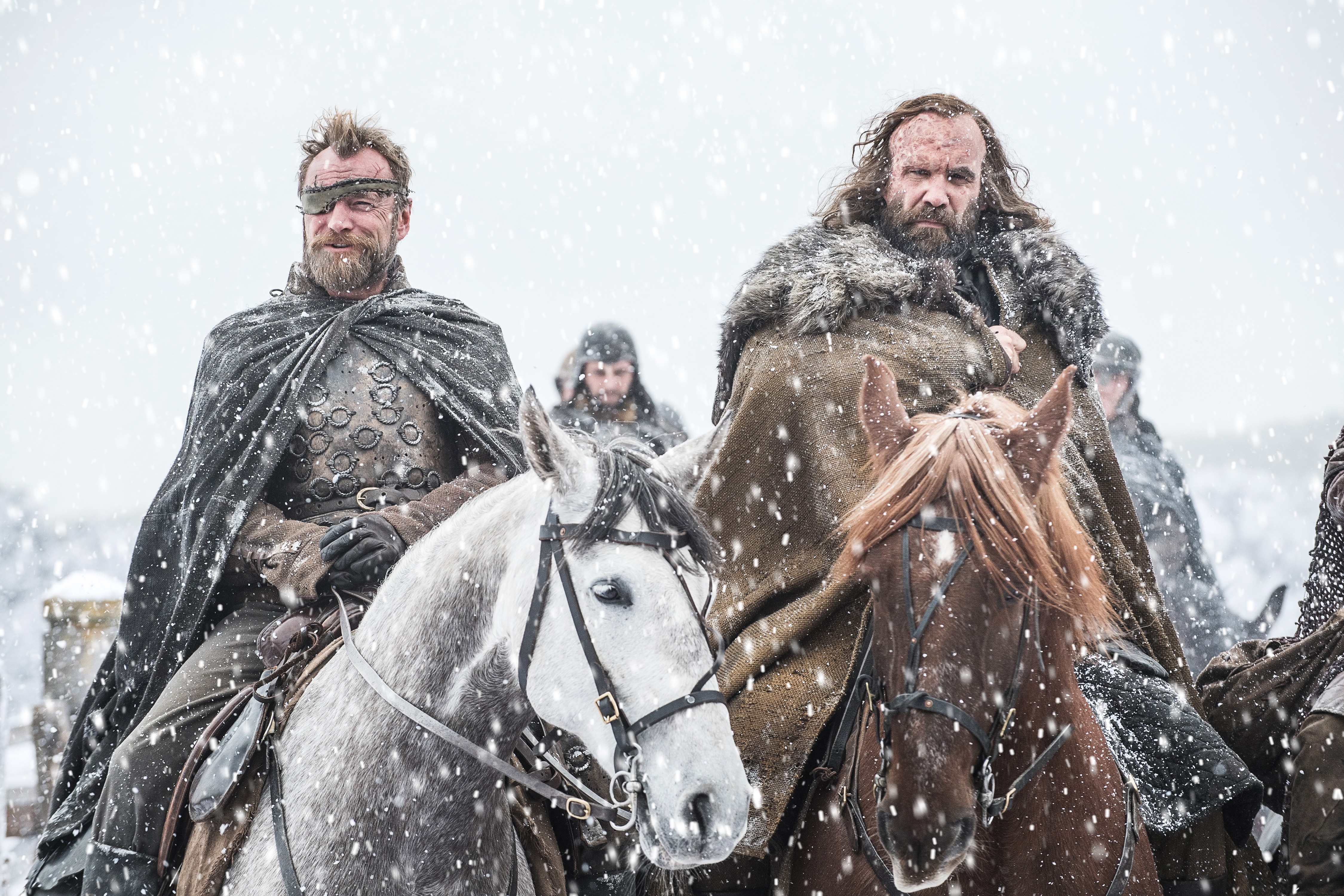 We get a pretty decent sized scene with the Brotherhood Without Banners. But it’s basically just to tell us the Hound is becoming a nice-ish guy. They take shelter in a small farmhouse, which turns out to be the one Clegane and Arya stayed at years earlier. The farmer, who he robbed, and the daughter are both dead now, which the Hound predicted at the time. With the Hound questioning why Beric Dondarrion is the one continually brought back from the dead, Thoros of Myr has the Hound look into the flames in the fireplace. He reluctantly does and then sees the army of the dead and the Wall. Thoros wakes up in the night and finds Clegane digging a grave for the farmer and his daughter.

There’s a lot going on with Sam in Oldtown. Well mostly it’s putting books away, emptying chamber pots and eating. I don’t ever need to hear that sloshing sound of the chamber pots again. We’re introduced to one of our new characters, Archmaester Marwyn, when Sam asks him permission to read the books in the Citadel’s restricted section for info on the White Walkers. But the Archmaester thinks the Wall provides enough of a defense and denies the request. Sam won’t be stopped though. He steals a set of keys and takes one of the books. He finds that the island of Dragonstone has a large amount of dragonglass, the substance that can kill a White Walker. He sends word to Jon. Then it’s back to the menial tasks. While collecting bowls from a hallway of cells housing sick patients, an arm covered in greyscale emerges from a door. Then the raspy voice of Jorah Mormont asks Sam if Daenerys has come  to Westeros yet. Well I guess he didn’t find a cure.

But the Dragon Queen actually has arrived, but just now. Daenerys and her people land on the beach at Dragonstone, the ancestral seat of House Targaryen. The slow-moving scene is meant to show us the weight of Dany finally returning to Westeros. Every new view, we get a pause and a bunch of dramatic looks. But everyone at home was thinking the same thing. It must have taken forever for them to climb all those stairs. So many stairs! There’s no ski lift type thing to transport everyone to the castle? In the chamber we saw several times when Stannis lived on Dragonstone, Daenerys and Tyrion eye the elaborately carved table/ map of Westeros. She finally speaks, having been quiet through this whole process. “Shall we begin?”

There we have it. Daenerys’ conquest of Westeros is at hand. The White Walkers are coming. Euron Greyjoy is hitting up H&M real quick for some tighter pants. It’s all happening! Without a ton of action, the episode called “Dragonstone” was still filled with intriguing moments. Plus, everything looked incredible. More landscape shots of the castles than we’ve ever had before, zombie giants and even the “previously on” sequence was a dramatic work of art. This is going to be a fun seven weeks!