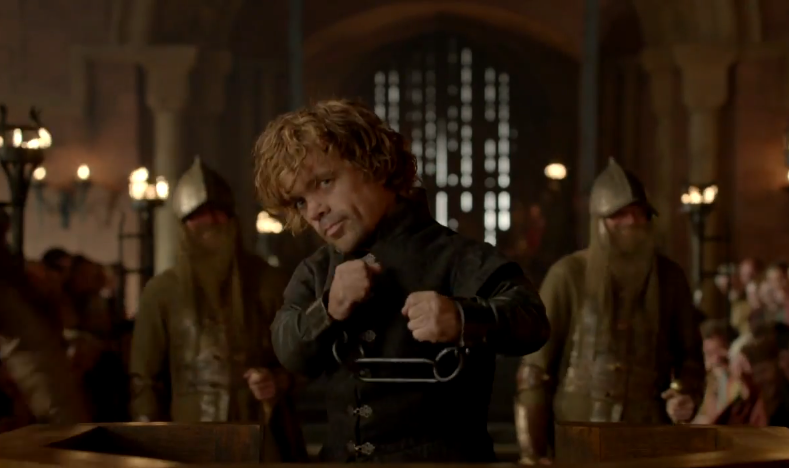 ** Ser Tom Herles, writer of recaps, is away across the Narrow Sea for this week’s recap. I, Lady Faith, wielder of keyboards, breaker of eyeglasses, the sunburnt, first of my name, will be filling in for him for this particular episode! Also, Spoilers Ahead!**

Wow. There, I said it so everyone can pick their chins up off the floor. Sunday night’s episode, S4 E5 ‘ The Laws of Gods and Men’, was one for the books to be sure. There’s a lot to cover, so hang on to your butts and lets dig into exactly what unfolded.

Stannis and the Not-So-Great Credit Score

Our favorite glutton for punishment, Davos Seaworth, and his King (also the guy that whacked Davos’ fingers off) Stannis Baratheon lead us into this episode and right between the legs of a rather large Braavosi Soldier. That’s right, folks! Braavos is officially on the map! We eventually find Davos and Stannis waiting around for their appointment at the bank. After a painfully long wait where Davos attempts to chat up the all-business Stannis, they are finally greeted by the lenders of the Iron Bank. Tycho Nestoris (Mark Gatniss, DOCTOR WHO FANS HOLLERRRR), the lead banker, sits across from the men to discuss the particulars of what they are looking for. After Davos declares Stannis the one true king and calls Tommen an inbred, the Braavosi bankers pretty much laugh in their faces and let Stannis know that sitting in the Iron Throne makes you king, and not much else. They go on to let Davos and Stannis know that they aren’t interested in words, but numbers. Much to Stannis’ dismay, the numbers the Iron Bank are looking for are simply not in his favor and they could not have been more frank about it, short of whipping out the red ink pad and stamping  ‘LOAN DENIED’ on Baratheon’s forehead.

While they could have gathered up what little dignity they had left and gotten back on their ship, Davos wasn’t having it. He whips out his hand full of lobbed-off fingers and flashes them at Tycho as proof that Stannis is totally reliable for ‘an honest payment’. Riiiight. He doesn’t stop there and attempts to convince the loan officer that Tywin Lannister is old as dirt and when he finally kicks the can, Cersei and Tommen are not going to cut the mustard when it comes to paying the debts they owe. The half-fingered Davos may have made an impression, but we leave that portion of the story for another time as we head off to see a smuggler friend of Davos’, chilling in a hot tub, telling washed up pirate jokes to a couple of naked chicks.

As Salladhor Saan, the smuggler, finally gets to the punchline, Davos strolls up, completely unphased by the copious amount of boobs, and asks his old friend to sail with him. When the smuggler hesitates, Davos throws down some serious coinage and proceeds to tell the man that he left a chest of the good stuff at his home with his wife. Should we take this as a suggestion that our one true home boy, Stannis, got the loan? Only time will tell, but Davos does seem pretty pleased. 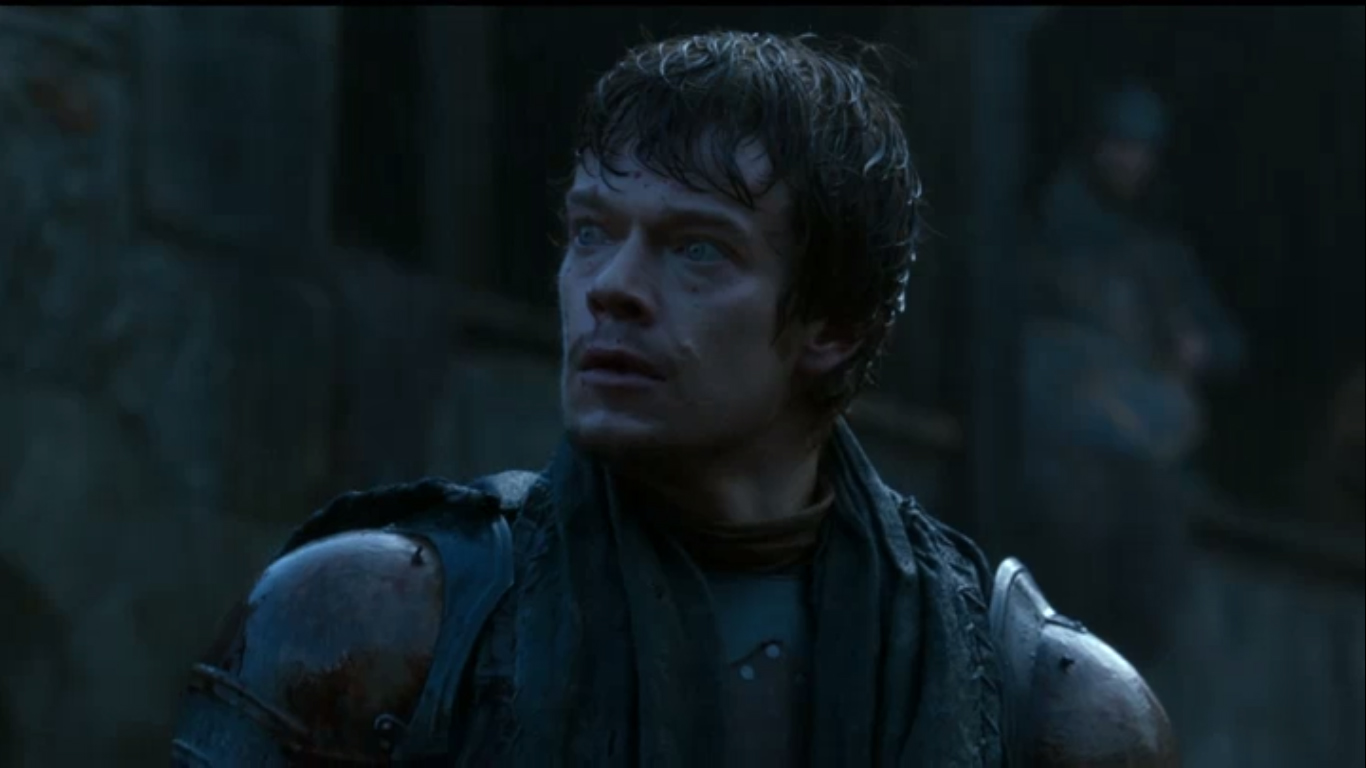 Iron Islands, The Dreadfort and a Whole Lot of Reeking

Yara Greyjoy, Theon/Reek’s sister has finally gotten all riled up about what has been going on with Theon while in the hands of super-creep, Ramsay Snow. The beginning of this scene shows her rounding up the best men that the Iron Islands have to offer with an inspired reading of Ramsay’s letter that chronicles how he took away Theon’s favorite ‘toy’. Barf. For the record, if I had a Silver Stag for every time this Ramsay fellow made me want to vomit, I could buy wayyyy more than 8,000 Unsullied. Speaking of which, Yara’s call to arms scene is completely interlaced with Ramsay having very creepy sex with a random girl. As that gets more and more hot and heavy, the Iron Born managed to breach the Dreadfort and Yara forces a guard to tell her where to find Theon/Reek. Eventually, she finds him in a kennel with the dogs, but not before the slits the jugular of the guard who told her how to get there.

As if it isn’t agonizing enough to see Theon again, still completely brain-washed, we quickly realize, as does Yara, that what could have been a really hopeful situation is quickly turning sour.  Theon/Reek doesn’t remember his sister and refuses to leave with her. After a brief struggle, Theon is back in his cage and Ramsay bursts into the room to confront Yara. Still disgustingly shirtless, weirdly hairless, and bearing stripes of blood all over his chest, Ramsay commands his men to attack the Iron Born. Finally, the two sides come to an impasse, but Ramsay decides to unlock the dog cages and Yara, along with her men, quickly flee, leaving Theon behind and declaring him dead.

Later, Ramsay decides to reward Reek for staying loyal and draws him a bath. After a really awkward undressing, Theon gets into the tub and Ramsay begins washing him with a sponge. He asks Theon/Reek if he loves him and Theon replies ‘Of course, my lord’. Ramsay then asks Theon to do him a favor and tells him he will have to pretend to be “Theon Greyjoy” (and ultimately help him take Moat Cailin). 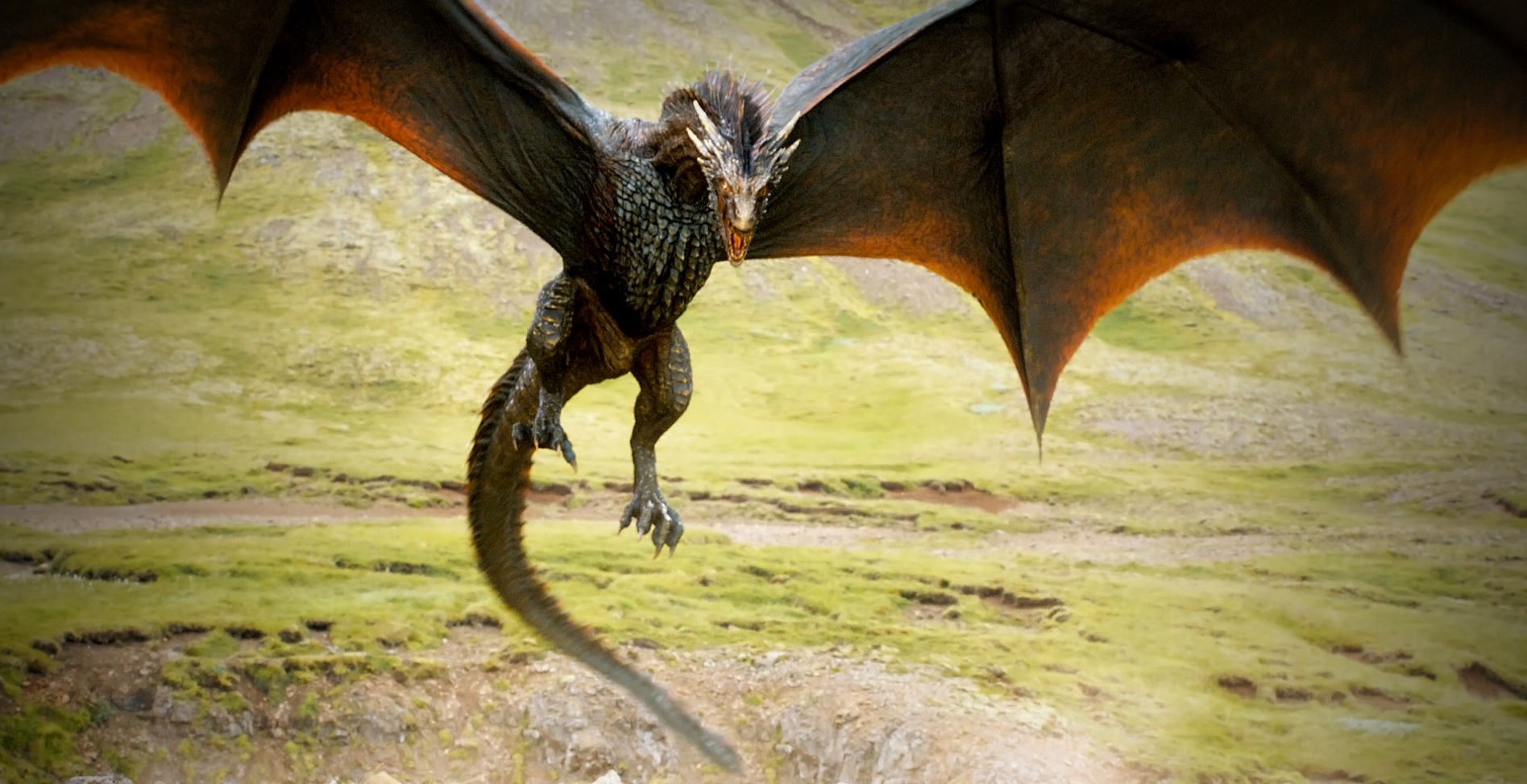 Meereen: Where the Sun is Hot, but the Goats are Hotter

After the uncomfortable scene at the Dreadfort, the beautiful open fields of Meereen are a peaceful retreat. At least, they were until one of Dany’s drangons plows through, roasting a heard of goats and taking off with a quick snack. The scene cuts to the goad herder petitioning Daenerys, who is now Queen of Meereen, to replace them. She agrees and tells the man she will pay him the value of the goats three times over. She asks to have the next resident of Meereen with a problem sent into the throne room. As it turns out, the next guy is the son of one of the Masters that she had crucified on a sign post as justice for all the slave children that were slaughtered. As guys who have had their fathers murdered go, this one is pretty nice and only asks to be able to bury his father, after telling Dany that he is totally loyal to both her and Meereen. At first, Dany tells him to shove off. Why? Because, JUSTICE. That’s why. Eventually, he wins her over and she let’s him bury his father’s body. Dany obviously gets the warm fuzzies for a moment because, man, she is suchhh a kind and compassionate Queen. Wait, what do you mean there are 212 more supplicants waiting to ask her for stuff? Ruling people sucks. 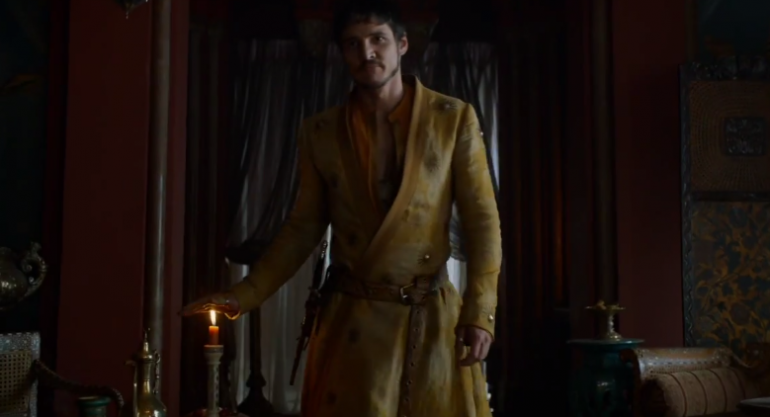 The show’s next segment takes us to King’s Landing where all the action that we are dying to see will inevitably happen, maybe…we hope…eventually. The small council is having an early morning meeting and our favorite Martell, Prince Oberyn, is not very happy to be awake at this early hour. Why? He doesn’t say. But, we can only assume it’s because he was up late doing you know what with who knows who. After a few quips about how early it is, the meeting gets underway with Mace, Tywin and Oberyn listening to all of the information Varys has gathered from his ‘little birds’. On his list of gossip:

2. Dany has taken over Meereen. She also has a bunch of Unsullied and some dragons.

After they discuss whether or not to be concerned about Dany the dragon mama, Oberyn and Varys have a little chat in the throne room about Varys being from Essos, even though he has no accent. Then, in true Oberyn fashion, he invites Varys to the brothel for wine and random relations. Varys replies that he doesn’t like boys, girls, or anything really, except of course, maybe a permanent seat in the Iron Throne.

The scene cuts to Jaime Lannister heading to Tyrion’s cell to bring him to his trial. Tyrion characteristically wise-cracks about being in shackles Eventually, they get up to where the trial is being held. Tommen, likely the only sane person left, excuses himself from the trial and lets Tywin take his place as judge. Witnesses are then called to chronicle every single mean thing Tyrion has ever said about Joffrey, ever. We learn that a poison labeled ‘The Strangler’ was, indeed, what brought Joffrey to his swift ( but definitely not swift enough) demise. Sansa’s necklace is also brought in as evidence by Grand Maester Pycelle, citing that it was found on the body of Dontos. Pycelle then says that Joffrey was the most noble child ever put on the earth and everyone else in the room gave him a ‘you’re really milking this’ eyebrow raise.

In all, the trial is a lengthy accusation against which Tyrion is not allowed to speak out. During recess, Jamie strikes a deal with Tywin that will require him to leave the King’s Guard and marry a women/father children  in Casterly Rock  if Tywin will allow Tyrion to beg for mercy and be allowed to join the Night’s Watch.

When the trial resumes, Jamie tells Tyrion about the plan and tells him to trust him and shut up. That was all well and good until Tyrion’s lover, Shae, shows up out of nowhere and lies about the relationship she had with Tyrion. She claims that she knew about a plot between Tyrion and Sansa to kill Joffrey and that she served as not only Sansa’s maid, but also Tyrion’s whore.

In what will probably turn out to be an award-winning scene for Peter Dinklage (yeah, we’re calling it.), Tyrion begins to whisper erratically that he wished to confess. As he begins to seethe, Tywin tells him to confess his crimes. Instead of confessing to the murder of Joffrey, Tyrion confesses to the crime of being a dwarf. He continues to berate Tywin, Cersei, and the entire audience, telling them that he wishes he had poisoned the King. He also spits a particularly venomous line at Cersei, saying that “watching your vicious little bastard die gave me more relief than a thousand lying whores.”

In the end, it is clear that Tyrion knows the trial is rigged against him and he chooses an option that has served him well in the past. A trial by combat.

That’s it for this week guys! In true Game of Thrones fashion, where there is one question answered, there are two more to be asked. Come back next week as Ser Herles resumes his rightful place as Recapper for episode 7 of this season!

The Multitude of MOBAs