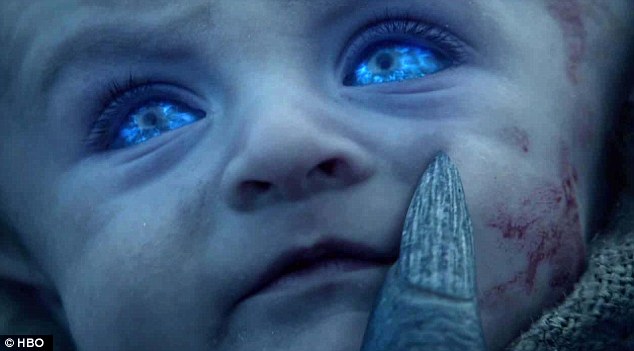 What’s that off in the snowy distance?  Well, it looks like a White Walker. He sure is taking his time sauntering along on his zombie horse. I’m talking Samwell Tarley slow. The episode is called “Oathkeeper,” but the Valerian steel sword given that name is far from the most interesting element of the episode. We saw a number of exciting developments with new storylines introduced for some of our favorite characters. And the big “Game of Thrones” guessing game regarding who killed our old pal King Jof Jof is answered. Here’s our episode recap.

The GOT Pet Store: Ghost, Summer and Ser Pounce

After the epic speech last week, Daenerys continues her focus on Meereen. Grey Worm features this time around. After a little English/common tongue lesson with Missandei, Dany sends Grey Worm and some other unsullied into Meereen through the sewers. They happen upon a meeting of all of the city’s slaves, which is quite lucky if you ask me. Worm talks up Daenerys’ cause and provides weapons. The slaves go out and kill the masters and in turn free themselves. The next morning Dany has a big character development moment as she shows the surviving masters no mercy and nails them to sign posts like the slave children that were used as mile markers. Things are getting real in the Targaryen camp.

At the Wall, Jon continues dealing with the assorted annoying characters running things currently (Alliser Thorne and Janos Slint). Even more annoying is the fact that Locke, the guy who cut off Jaime Lannister’s hand and has now been tasked with catching Bran and Rickon, has made his way into the Night’s Watch camp and has befriended Jon. The Thorne-Slint brain trust decides that they should let Jon go and handle the mutineers at Craster’s Keep with the hope that he doesn’t make it back. After asking who will come with him, a number of his usual posse volunteers…including Locke.

Up at the keep formerly belonging to Craster, Karl seems to have dubbed himself the leader as he bosses around Rast and drinks from the skull of Lord Commander Mormont. I’m no doctor, but I imagine skulls probably contain lots of bacteria and yucky brain stuff that is quite gross to mix with wine. Rast is ordered to bring the last son of Craster into the forest for sacrifice to the White Walkers. But then this seemingly average scene gets very interesting.

Rast walks up to a cage mocking Ghost who is locked inside. I have been wondering for a long time where Ghost is. Even though it seems Jon hasn’t. Nearby, we cut to Bran, Hodor, Jojen and Meera sitting around a fire. They hear a baby crying. Bran gets wargy with it and leads Summer to investigate. He sees Ghost before Summer falls into a trap. They then get caught by the mutineers. As Hodor is chained up and messed with, Bran has to admit who he is to Karl. With Jon and his crew coming, I’m hoping for the best, but if all our heroes and wolves make it out of this alive, I’d be very surprised.

Oh and still riding very slowly on a zombie horse is the White Walker. They’re just so incredibly slow.  After taking the baby, he brings it to an altar where a different weirder looking White Walker touches the baby’s face. His eyes turn blue and we can only assume he is now the princess from Frozen. 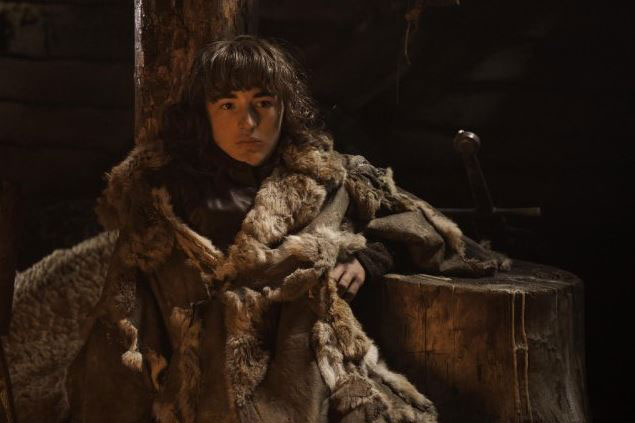 Now, to the south where it’s a bit warmer, but the characters are no less frustrating. Sansa and Little Finger are on the boat that apparently causes bad acting because both are a bit awkward in their exchange. We do learn however that the ship is headed toward the Vale where Lord Baelish is to wed Sansa’s aunt Lysa. Little Finger also fills in lots of blanks about Joffrey’s death. Lady Olenna, at the wedding, with a stone from Sansa’s necklace? It seems that way at least. In King’s Landing, Lady Olenna tells Margaery that she would never have allowed her to marry evil Joffrey. Also, she should bond with Tommen before Cersei turns him against her.  So Margaery takes that advice and visits Tommen at night in his bed. Nothing “Game of Thrones” like happens here. They just chat about stuff including Tommen’s cat Ser Pounce, a name which countless people will now use for their next pet cat. Not me, I prefer Cat-lyn Stark or Hodor-able.

The rest of the King’s Landing storylines are the Jaime show this week. After sword training, Bronn tells Jaime he should visit Tyrion. He does and Tyrion swears both he and Sansa played no role in the murder. Later the King Slayer visits Cersei. She’s understandably mad that he didn’t protect Joffrey and wonders why Catelyn Stark released him. Is he a spy for the now dead Starks? Obviously not. After that awkward lover/sibling/rapist exchange, Jaime gives armor and his Valyrian-steel sword to Brienne before asking her to find and protect Sansa. He also gives her our pal Podrick as a squire. Seems like a win-win situation to me, assuming both safely leave the city. She names the sword Oathkeeper, which she and Jaime approve of. I guess Bologna-slicer, which would be my first choice, was taken.

Next week’s preview looks very intriguing, but after a few weeks of planning episodes, I’m ready for “Game of Thrones” season four to really break open. Let’s see if that is, in fact, what happens. Until next week, Winter is Coming.