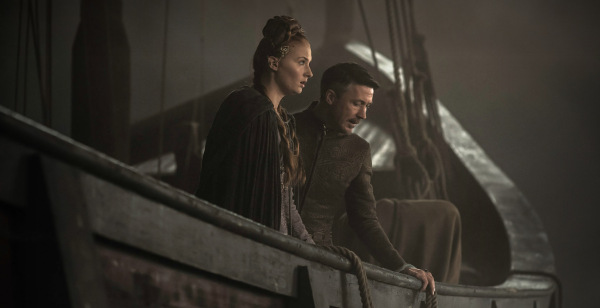 Hey guys, remember last week when Joffrey died? How about that? I half expected him to reanimate this week as an undead version of his already unbearable self. But that didn’t happen… yet. After such an explosive ending last week, I couldn’t possibly imagine how the show would keep up the momentum. Well I heard Little Finger is coming back. Yes! I bet he’s going to cause some real chaos around King’s Landing. Wrong. It turns out he’s just hanging out on a ship that is inexplicably hidden in thick fog while the rest of the city is enjoying mild temperatures under partly cloudy skies. I bet it’s because winter is coming. Isn’t it always? Damn Westeros weathermen, they never get it right. Let’s recap this week’s episode “Breaker of Chains.”

We’ll start in the capital, where the brunt of the interesting storylines are taking place this season. Right after Joffrey dies; Cersei and Tywin realize Sansa has disappeared. She’s with Dontos heading to Pirates of the Caribbean: Little Finger in the Fog. When arriving, Little Finger has Dontos killed with a crossbow arrow through the face because that’s how things happen on “Game of Thrones.” It turns out Dontos had been working for him this whole time. So now Little Finger has Sansa, as well as a gravelly voice that now resembles Christian Bale’s Batman.

Across town, Margaery Tyrell, widow to two dead kings, is told by Lady Olenna that she isn’t queen because they didn’t get to do the deed yet. In the Sept of Baelor, Joffrey is laying there all dead and stuff with the googly rock eyes they put on their corpses here. Tywin begins grooming Tommen, Joffrey’s younger brother, to be king. Basically, he could do whatever he wants and be better than Joffrey. After they leave, the handless Jaime Lannister shows up to console Cersei. She tells him to kill Tyrion. Jaime is clearly upset by this and for one second I really thought he was going to stick up for his brother. He has kind of been becoming a good guy lately. Well turns out I was wrong. He jumps Cersei and proceeds to rape her on the floor next to their son’s corpse. Disturbing? Absolutely.

Speaking of our favorite Lannister, Tyrion is in jail sitting around. Podrick comes to visit and tells him all about the upcoming trial and Sansa vanishing from the city. It also turns out he was approached to tell some lies about Tyrion at the trial. So, Tyrion orders Pod to leave the city before it is too late. Tyrion keeps trying to save his people by sending them away. I guess we’ll see if it actually works.

Going north, The Hound and Arya continue heading toward the Vale but accept shelter and food from a nice farmer and his daughter. I expected a terrible sad murder in their future, but they are just lied to and robbed by The Hound. It’s not very nice, but in “Game of Thrones” terms, it’s like winning the lottery. At Dragonstone, the ever more bitter Stannis and Davos learn of Joffrey’s little problem of not living anymore. Stannis thinks that this is because of the magic involving the leeched blood from Gendry last season. He then gives Davos grief for freeing Gendry and not having an army to rep Stannis on the battlefield. Then during Davos’ reading lesson with Stannis’ daughter Shireen, he has a light bulb moment to write to the Iron Bank of Braavos. That’s the same Iron Bank that the throne owes lots of money to.

Up at the Wall, Sam is worried about Gilly since a lot of his Night’s Watch brothers are complete a-holes. So Sam, in an attempt to keep her Safe, brings her to nearby Mole Town. It looks to essentially be a porta-potty in the form of a town. After the wildlings kill a small village, Styr (the cannibal guy we met earlier this season) sends a young boy to tell the Night’s Watch. After a debate, it’s decided they should stay at Castle Black to defend the Wall. But wait, there’s more! We learn the former Night’s Watch jerks who killed Lord Commander Mormont are holed up at Craster’s Keep. So, Jon convinces everyone they have to be killed before Mance Rayder tortures the truth out of them regarding how few people are actually guarding the Wall.

Now to the storyline that provides the title of the episode. Daenerys and her crew arrive at the slave city of Mereen. A champion is sent out, who must be met by Daenerys’ champion in single combat. We go through the ranks as Dany rules all of her advisors to important to risk except for Daario Naharis. So now that we’ve decided… Wait. What is… Yup, he is. The Meereen champion is peeing his name in the sand in attempt to disrespect Dany. Maybe he didn’t write his name. They don’t actually show it. But the champion then proceeds to ride toward Daario, who throws a dagger in the charging horse’s eye and then kills the champion after he falls. Daario then pees in return disrespect. Daenerys gives a bad ass speech to the slaves of Meereen and catapults barrels filled with broken chains and slave collars to show the residents what is coming.

So this week provided a number of quality moments. It now seems that we have been completely introduced to the tone and subject matter of “Game of Thrones” season four. A few questions for next week. Will we get to see a battle in Meereen? Will Tyrion send away any more of his companions? Will Little Finger’s voice go full Christian Bale-Batman? We’ll have to wait and see.

How to Create Characters Worthy of Game of Thrones