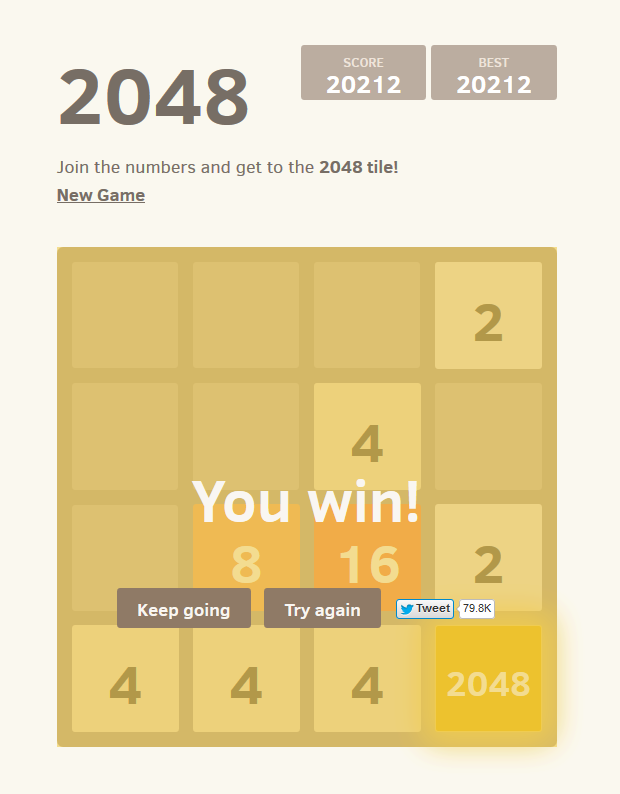 The new online casual mathematics puzzle that’s sweeping the nation is 2048, a game that appeals to the kindergartener in all of us by showing how 2+2=4. The game was developed by Gabriele Cirulli, an Italian web designer who specializes in making simplistic but intuitive graphical user interfaces. It has become an internet sensation because of its easy-to-play, difficult-to-master gameplay. You can find it here.

2048 provides blocks with twos and fours on them. The player shifts these around, matching up identical blocks to combine and double their value. The goal is to keep doubling your numbers until the highest block is equal to 2048 (hence the name). Now before you start randomly hitting the arrow keys and turn your board into a jumbled mess, there are a few key strategies you can use to really get that high score up. After learning these tips, I was able to double my score, and you, too, can impress all your friends with your ability to multiply numbers by two a bunch of times. Here’s how to win at 2048:

2. Pick a Corner
Because the board is symmetrical, the corner you pick is inconsequential, but try to favor that direction as often as possible. Favoring two non-opposite directions will help to organize your board so you won’t trap your higher blocks.

4. Fill a Row
As you alternate two non-opposite directions to get all your blocks into a corner, you will eventually find that some numbers won’t match up and will form checkerboard patters. To correct this, fill the topmost row. That way the highest blocks lock into place and you can shift the bottom blocks around until they match up. Remember to keep your highest number in the corner at all costs

8. Build on Your Row
Your goal is to have a row with all the numbers in sequential descending order from the corner (i.e. 64, 32, 16, 8). That way you can cascade your numbers into the corner as they level up.

16. Hug the Edges
A few formations such as a perfect rectangle may force you to dislodge yourself from your happy little corner. If this happens, don’t panic and try to get your larger numbers to a wall. This will at least hold your high numbers still until you can regroup

32. Flip-Flop in a Pinch
There will come a time when you find your board so cluttered that you are barely hanging on for dear life. When this happens, don’t try to rearrange the board. Instead, alternate opposite directions until you can match up two or even three pairs at once. Then, use these matches to dig your way through the messy middle of the board.

64. Maintain the Pecking Order
Sometimes, a row will get out-of-order. While you may be tempted to deal with the numbers on the end first, it’s more important to get rid of small numbers between big ones. Remember: You have a hierarchy to keep up.

128. The Terrible Twos
Whenever twos and fours appear, try to clear a path for them. Twos can gunk up the works really easily, so try any way you can to make space when they appear. Then, when another block spawns, you can match them up without larger numbers in the way.

256. Keep it Simple
You may be tempted to pull off pre-planned maneuvers to get the higher numbers to do what you want. However, don’t try to pull any fancy tricks because more often than not, twos will spawn and mess up your strategy. Just go with the flow and eventually you’ll achieve your goal.

512. Layer Your Rows
As your numbers get larger and larger, you may need more than one row to get your numbers high enough to progress. As always, order is better than chaos for making bigger blocks. Snake your rows back and forth so that the highest number on one row matches the lowest number on the more important row.

1024. Postpone Your Gratification
As satisfying as it can be to make matches as quickly as possible, it’s important to make sure any given move won’t put you in an awkward position in the future. Check to see whether combining in the opposite direction can set up combos for the next move. Make sure you don’t accidentally destroy your row, or make a number to big to move around practically.

2048. Keep at it!
As helpful as these strategies are, there still is an aspect of luck and practice. You never know where a block will spawn, or whether it will be a two or a four. As you keep going and get more experience, you’ll start to notice better and better opportunities for matches but you can’t expect to win right off the bat. Find a style that works for you, and you’ll definitely reach 2048.