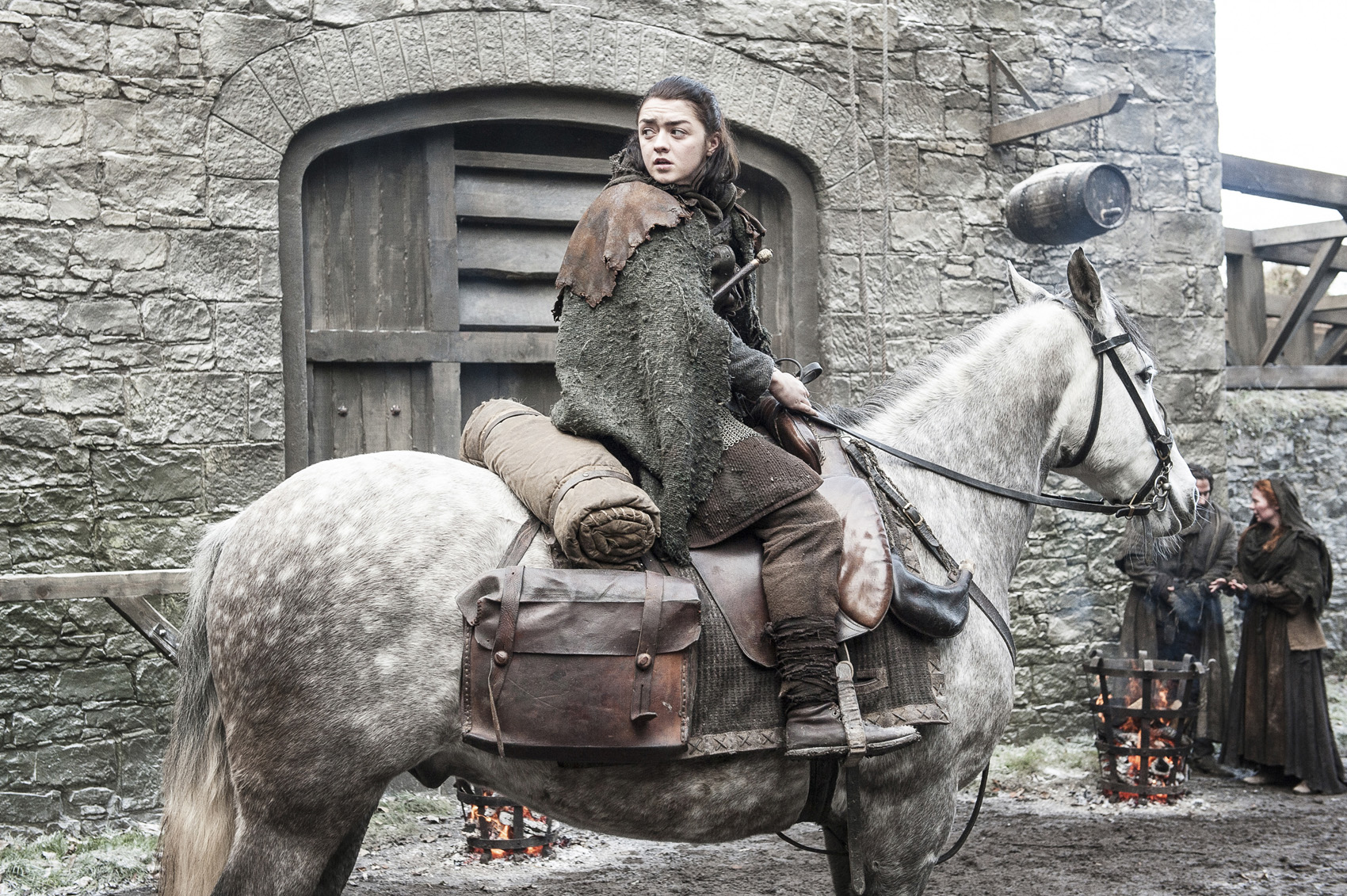 From the end of season six through last week’s season premiere, everything seemed way too optimistic for our favorite characters. That’s not the Game of Thrones way. Episode two, Stormborn, reminded us of that. Daenerys’ first action in her conquest led to a pretty rough defeat on the high seas. But after last week’s introduction, all of the storylines have been put in motion setting up some pretty intriguing moments to come. Here’s our Game of Thrones recap for this week.

Let’s begin with Arya, who had the most action in the season premiere. This time around she’s on the road. Eating at an inn that we’ve seen several times throughout the series, Arya meets up with her old buddy, Hot Pie. She tells him she’s been doing a bit of baking, but leaves out the fact that she’s creepy and was baking people into pies. But the big revelation comes when Hot Pie tells her about Jon retaking Winterfell and being named King in the North. Now she has a choice to make. Join Jon in the North or continue her Cersei assassination plot in King’s Landing. She chooses north and begins the long journey from the Riverlands. While setting up a fire in the woods, a pack of wolves come up on her. But the wolf that is clearly in charge, and double the size of the rest, is Nymeria. Arya sent her away to spare her life after she bit Joffrey and was going to be killed in season one. Well it looks like she’s all grown up now. Arya wants the wolf to join her again. But she doesn’t. “That’s not you,” Arya says. How cool would it have been if Arya rode up to Winterfell leading a pack of wolves? The answer is Arya levels of cool. She has her own category.

Down south in Oldtown, Sam continues his frustrating time at the Citadel. Archmaester Ebrose is completing an exam of Ser Jorah and it doesn’t look good. Ebrose says there’s nothing that can be done. After giving some details on how long his mind and life could remain intact with the sickness, he implies Jorah should take his own life. After leaving the cell, Sam tells the Archmaester that he thinks he knows of a way that could cure the ailment. Unsurprisingly, he is ignored. If Ebrose thinks Sam is such a boob, why does he spend so much time with him? Aren’t there other students at the Citadel? Well whatever the reason, Sam continues his rebellious streak and treats Jorah anyway. Sam tells Jorah about his position in the Night’s Watch and how he was with Jorah’s father, Lord Commander Jeor Mormont, when he was killed. So he is going to try to help that man’s son. First things first, let’s slowly cut off all your skin with a scalpel. At this pace the series will be long over by the time Sam finishes the process. Get to slicing! (For the record, Ebrose was identified as Marwyn in the episode one recap. There was some confusion among sources as to which Maester Jim Broadbent was playing. But there is a consensus now that this is Ebrose.)

On Dragonstone, Daenerys confronts Varys about his past allegiance to the Mad King and King Robert and the little issue of him plotting her death. But Varys sells his position well by saying he doesn’t offer blind allegiance, but will serve her faithfully because she is in the best position to help the common people of Westeros. Apparently this didn’t come up when they were on the same boat crossing the narrow sea. I guess they were too busy staring ominously out at the water. Melisandre turns up and tells Daenerys she has a role to play in the great war to come. She also tells Daenerys to invite Jon Snow to Dragonstone so he can tell her what he has seen north of the Wall. Tyrion vouches for him. So Dany tells him to invite Jon to come “and bend the knee.”

Daenerys then meets with her war council? Small council? Cast members on the show who are on Dany’s team? Whatever you want to call them. They bicker back and forth a bit but ultimately agree to follow an invasion plan laid out by Tyrion. Dorne, the Tyrells, and the Greyjoys will lay siege to King’s Landing. The Unsullied and Dothraki will take Casterly Rock in the west. The plan is to keep the foreigners away from the capital so the high lords of Westeros don’t see this as a foreign invasion. In a one on one between Daenerys and Lady Olenna, the Queen of Thorns advises the Queen of Dragons to be a dragon and not follow the advice of men like Tyrion. We also get a love scene with Grey Worm and Missandei. With Grey Worm’s imminent departure for Casterly Rock, Missandei stops by and the tension between the two finally turns into a kiss and then… more. Let’s just say we had multiple shots of bare butts.

Not too much has changed at Winterfell. Jon tells the lords and ladies about Sam’s message that there is dragonglass on Dragonstone. He also says that he received an invite to that very island from Tyrion. To the surprise of no one watching, everyone says he shouldn’t go. Sansa has an outburst and Jon sighs and says he’s going anyway. They need the dragonglass to fight the White Walkers. Fire-breathing dragons wouldn’t hurt either. Jon says Sansa will rule while he’s travelling. She immediately looks at Little Finger. Ugh. Jon visits the crypts before he leaves and is interrupted by Little Finger, who says he’s not the enemy and that he loves Sansa. Jon thanks him by slamming him against a wall and choking him. Ned did the Sam thing in King’s Landing in season 1. Maybe Jon shouldn’t have made an enemy of Little Finger right before he leaves. Special props go to the awesome Ned Stark/ Sean Bean statue in the crypts. I would like one for my living room please.

Cersei is continuing her recruitment process in King’s Landing. She addresses a group of lords from the Reach. She paints a picture of Daenerys being a new incarnation of the Mad King. The group is sworn to Olenna and the Tyrells. But we’ll see how many of them jump ship. Randyll Tarley, Sam’s dad, steps forward to bring up the small fact of the three dragons that will oppose Cersei in battle. Qyburn reveals they are working on a solution. After the meeting, Jamie asks Randyll for his support. After all, we know he is an accomplished warrior. House Tarley has the fiercest fighters in the Reach. At first he doesn’t seem too keen to betray his oath to Olenna. He even takes a jab at the Lannisters and the dishonor of the Red Wedding. But Jamie appeals to Randyll’s racism and brings up the Dothraki’s impending arrival. He doesn’t give an answer, but I get the vibe that Randyll will side with Cersei. Especially after Jamie offers him the position of Warden of the South. We also get to see Qyburn’s dragon solution. A giant crossbow! He demonstrates by shooting the skull of Aegon the Conqueror’s dragon, Balerion the Dread, which sits in the Red Keep’s basement. It seems like a good plan. After all, it’s the exact same thing used to kill Smaug in The Hobbit. But fine.

Things seem to be going well with the Greyjoy fleet sailing to Dorne to pick up the Dornish army. Yara and Ellaria are… getting along. Theon is generally uncomfortable, but that’s nothing new. The Sand Snakes are ragging on each other. But things turn sour quite quickly. Euron Greyjoy’s new iron fleet attacks and quickly begins to destroy everything in sight. He boards the lead ship and is hacking down opponents left and right. The night battle on flaming ships looks amazing. What isn’t amazing is how easily Euron is winning. He stabs and kills Obara Sand. He strangles and kills Nymeria Sand with her own whip. Obara did get a stab in on Euron first though. Could her spear have been lined with poison like we’ve seen the Dornish do in the past? Euron faces off against Yara, but he has her beaten when he calls for Theon. Theon first looks like he will charge in to save her, but he is frozen with the fear from the days of his torture. He drops his sword and jumps ship. Euron gives off a sinister laugh and sails away. He seemingly has a bunch of key hostages now. Yara Greyjoy, Ellaria Sand, and Tyene Sand. That is assuming he doesn’t kill any of them before he arrives back at King’s Landing. Theon watches from the wreckage as the ships sail away. Nymeria is hanging from the front of the ship and Obara is impaled on it.

It didn’t go well for us Game of Thrones fans watching at home, but this was a crazy battle to witness. Also, this was only episode two. A sequence like this is usually saved for late in a season. What is Daenerys’ next move? I would suggest riding out on the dragons and frying the Iron Fleet. But that may be too obvious of a solution for Game of Thrones.