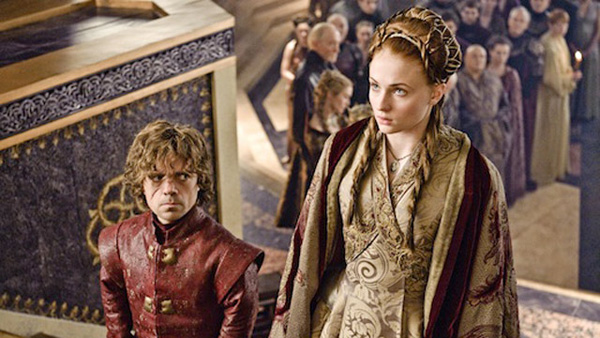 The eighth episode of this third season of Game of Thrones saw the writers take a step back. Sure we got somewhere story wise, but in the process we left out a number of our characters to focus on a handful. No Bran, Jaime, Jon, Robb or Theon, but I’m not complaining about that. Frankly we all could probably use a break from these characters. Let’s talk about what does happen.

After somehow wandering right into the hands of the Hound, Arya considers hitting him in the head with a big rock while he sleeps. The Hound wakes up ruining her sorry excuse for a plan. Don’t they teach physics in Westeros, Arya? There’s no way you would be able to produce enough force to kill him. You would just make him angry. Well after a bit of chit-chat, the Hound explains that Robb is at the Twins for Edmure’s wedding and he’s going to try and ransom her there. The pair rides away on the most awkward two person horse ride I’ve ever seen.

At Dragonstone, some weird stuff is going on. Melisandre introduces Gendry to Stannis. Then after Gendry leaves the room, they make it sound like they plan on killing him. Stannis then visits Davos in the dungeon. You remember Davos. They call him the onion knight, he’s learning to read. Stannis frees him on the promise that Davos won’t hurt Melisandre. Davos agrees, but he isn’t happy about the idea of a sacrifice. But this is where things get weird. Melisandre seduces Gendry. They’re all naked and stuff. This is Game of Thrones after all. She then ties him down and lays a bunch of leeches on him. Stannis and Davos end up coming in the room. They didn’t even knock! Stannis then drops the leeches into a fire mentioning the names of Robb Stark, Joffrey Baratheon and Balon Greyjoy. I guess the Baratheon blood is supposed to help with some kind of magic or something. But I think the main message here is Melisandre is a weirdo. Even in Game of Thrones, she is a weirdo.

The entire King’s Landing storyline focuses on the wedding of Tyrion and Sansa. They’re definitely a weird pair, but in the Game of Thrones character list, both could do much worse. First Margaery tries to bond with Cersei. It doesn’t end well. Cersei tells her the story of house Reyne, who rebelled against the Lannisters and were all killed. Uh oh, that’s foreboding. So the wedding happens awkwardly. Joffrey continues his reign as the most hated character in television history by taking away Tyrion’s stool at the ceremony. Then afterwards at the wedding feast, Tyrion gets really drunk and Joffrey threatens to rape Sansa. Tywin tells Tyrion to stop drinking and get Sansa pregnant. He means immediately? Would a few days really make a difference? Before retiring for the night Tyrion publicly threatens Joffrey. Joffrey gets his Justin Beiber fighting the paparazzi face on. Tywin calms them down though. In the uncomfortable marital bed chambers, Tyrion says he won’t consummate the marriage until Sansa wants to.

Daenerys, dragon mother extraordinaire, is hard at work sitting on pillows and threatening cities. This week her target is the mercenary army, the Second Sons, hired by Yunkai. She meets with them to no avail. Later the three leaders of the group plot to kill Daenerys. Daario draws the coin and is tasked to do the job. But when he sneaks into her tent disguised as one of her soldiers, he doesn’t finish the job. He pledges himself to her and pulls the Santa Claus sack off his back. Sure enough, inside are the heads of the two other leaders of the Second Sons. I guess we trust him now even though he’s incredibly shady.

Now saving the best for last, we have Sam. Sam? Boring, story is going nowhere Sam? Yup, that’s the one. Well, he and Gilly discuss what she’s going to name her son. Bam, so epic! Okay, that’s the usual boring stuff from Sam. But then, a group of crows assemble outside of the hut they’re staying in. A group of crows is actually called a murder in case you wanted to know. How interesting. A White Walker then attacks them intending to take the baby. Sam tries to defend them, but his sword is broken. In a final attempt, he desperately stabs the Walker with his dragonglass dagger and it kills the attacker. Go Sam! You’re awesome, you killed the White Walker. What’s that? They ran away without picking up the dagger? So now they’re unarmed in the wilderness. Smart move, Sam.

This wasn’t my favorite Game of Thrones episode of the season, and it definitely was not the best one. But Sansa and Tyrion got married. That is definitely an important development. Also, will Stannis’ leech threats work? I hope not for Robb’s sake. There are two more episodes this season. They should be interesting.