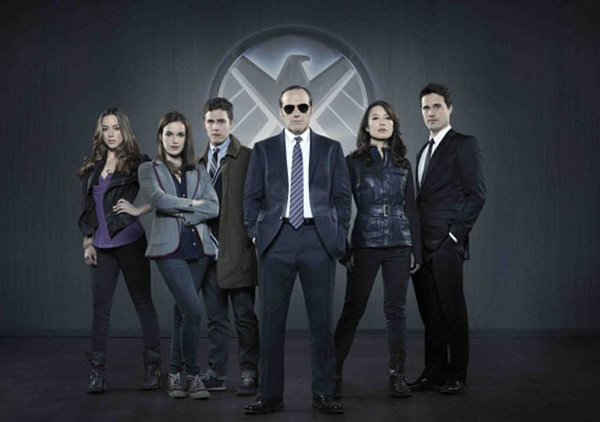 In 2012 an odd thing happened. After “The Avengers” was released and every movie-going person in the world saw the film, its box-office receipts ballooned to a ridiculous amount. That wasn’t the odd part though. Even with Iron Man, Captain America and The Hulk carrying the screen time, a group of devoted fans clung to a minor character. Agent Phil Coulson was a suit who worked for SHIELD. He made cameos in the other films and (spoiler alert) in a moment of dumb bravery was killed by Loki in “The Avengers.” Clark Gregg, who played Coulson has become a huge celebrity in Marvel circles. “Coulson Lives” is the common saying appearing on t-shirts and fan art. Conspiracy theorists have discovered holes in Coulson’s death scene. Well this devotion has somehow struck a chord with the powers that be. Coulson lives in the new Marvel television project, Agents of SHIELD, which premieres on ABC this fall.

Agents of SHIELD stars Gregg as his character leads a team of SHIELD field agents dealing with mysterious cases. The trailer that has been released looks like it will be a melding of a police procedural and “Smallville.” At ABC’s upfront event last week, the show was officially announced for a series pick-up. Word of the pilot had been circulating for a while, but if NBC’s failed “Wonder Woman” pilot taught us anything, it’s don’t count your episodes before a channel orders the series. ABC has been emphasizing the presence of Joss Whedon, who developed Agents of SHIELD while also directing the pilot. In addition he wrote the episode with Jed Whedon and Maurissa Tancharoen. After his success directing “The Avengers” this makes sense.

But the question with a Whedon project is always with how it will be perceived by entertainment executives, advertisers and the general public. In terms of television, “Buffy the Vampire Slayer” and “Angel” had longevity on the WB, but “Firefly” and “Dollhouse” are limited to cult status after early cancellations. History has been kind to both shows as they gain fans that would have been very helpful as their network runs were headed towards premature endings. “Dollhouse” had 26 episodes. “Firefly” had 14 produced, but only 11 saw the screen during its initial run. ABC and its parent company Disney are looking for much more than that with “SHIELD.”

Agents of SHIELD has a number of advantages over past Whedon projects though. “The Avengers” and the related Marvel films are a massive success that has won over fickle movie-goers. We’re all so afraid we might miss any tiny Easter egg of comic book obscurity that may pop up. So there’s no way we can skip the series. At the first sign of any low ratings, I expect ABC will pull out the big guns with “Agents of SHIELD.” Whether it’s a cameo with Chris Evans’ Captain America or the introduction of a more obscure comic book character we haven’t seen on screen yet, like Sentry or Ronin, Marvel fans will turn on their TVs in droves. Plus, we have to admit Whedon’s original material always has a bit of a strange vibe to it. Television execs aren’t always in on the joke. He doesn’t have as much freedom with Disney.

So I haven’t really covered how our buddy Coulson survived being stabbed by Loki and then dying a painful death. Well the main idea circulating is that Nick Fury faked Coulson’s death to motivate the Avengers into coming together. Okay fine, but we’ll wait to see the actual truth. Whedon has killed off popular characters before and his disregard for the finality of death screams comic book writer. So this sort of thing makes sense. It’s really for us fans to decide whether we are more concerned with continuity or seeing our favorite SHIELD operative on a weekly basis. Most of us would likely choose the latter. Agents of SHIELD will debut in the fall on Tuesdays at 8 PM on ABC.