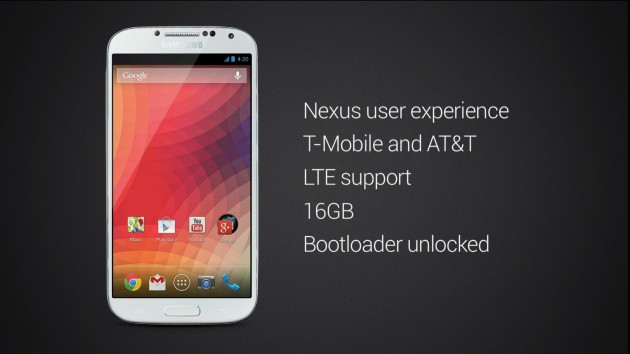 You thought the Galaxy S4 was the “Next Big thing”, didn’t you? Well, think again my friends, because Google just announced the all-new, all-Google, Galaxy S4 Google Edition, we’re still not sure about the name but that’s what it has been called so far, so just go with it.

Best thing about the Galaxy S4 Google Edition, you ask? Well, it runs stock android, so no more CrapW…err TouchWiz or any other bloatware. You get a Galaxy S4, the way Google imagined it. This is a Nexus device in terms of software, so you won’t be at the mercy of Samsung or carriers to get your updates; instead Google will make sure that you receive all your latest updates in a timely manner.

Even though this is so close to a Nexus device, the Galaxy S4 Google Edition is in no way as cheap as any Nexus device, not even close. The device will cost you a hefty $649 and it will be available on the Play store starting June 26. It will ship with a completely unlocked bootloader.

Specs remain the same, the only thing that has been changed is the software. So, you’ll still get the raw power of the Galaxy S4 bundled with the smoothness of Stock Android, that’s definitely a beast combination.

There’s a catch, however, the above mentioned release date is only for the U.S. launch. There are no words on when it will be available internationally. Don’t lose hope just yet, we’re certain that Google will bring this phone to more countries eventually, but that’s just an assumption. Even if the Galaxy S4 Google Edition makes its way internationally, we’re sure that it will only be available in countries that have access to Play store (One that sells hardware).

Looks like this is the closest to a Nexus we’ll get until the next iteration of Android comes out, because Google won’t launch the next Nexus device without a latest version of Android commemorating its launch.