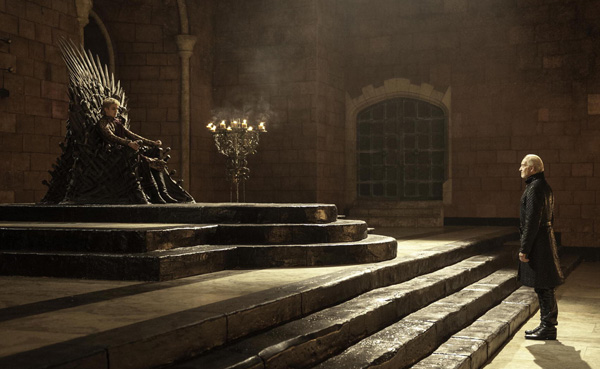 When reading the books in George RR Martin’s “A Song of Ice and Fire” or watching Game of Thrones, there is always a subtlety with how the story advances. You could watch a whole episode or read 100 pages and it seems like nothing happened, but invariably the story moves along. Well this isn’t one of those episodes. “The Bear and the Maiden Fair.” What a title. Well Game of Thrones, color me intrigued.

Return of the Crying Wolf

Possibly the most notable development in the episode is the fact that Cersei does not appear. Over the three seasons, she and Tyrion have been the constants, but oh well. We’ll survive without her. In King’s Landing, Sansa a.k.a Crying Wolf (I made that up) is crying and whining because she doesn’t want to marry Tyrion. Margaery, who becomes more awesome with each episode, tells Sansa they have to do what they have to do. Tyrion and Bronn have a similar conversation but with the use of more four letter words.

Tywin meets with Joffrey at the Iron Throne, where Joffrey attempts to be tough and demand details about the rumors of Daenerys and the dragons. Tywin all but makes the king piddle himself by subtle intimidation. Charles Dance, who plays Tywin, has been delivering great scenes every episode. Right outside of the city in Blackwater Bay, Melisandre mulls over those who died in the battle there last season. She then tells Gendry what we’ve known since early in season one. He’s Robert Baratheon’s bastard.

Since Joffrey brought her up, let’s check in on Daenerys. She, Ser Jorah, Ser Barristan, Grey Worm and her dragons arrive at Yunkai after what must have been a weird road trip. With her army in tow, the mother of dragons decides she wants to free the city’s slaves. The city’s messenger attempts to make peace to save the city, but Dany isn’t having it and gets all mad. I don’t think it will end well for Yunkai.

So far that’s a lot of chatting. How about some action? Yeah! Theon Greyjoy, whose scenes should be accompanied by a disappointed tuba, does not advance any story in the least. But after being goaded by some naked girls, his captor decides to cut off his “famous cuck,” whatever that is. Apparently he does follow through, but thankfully we don’t see.

In other filler stories, Osha is getting mad at the Reeds and how they want to go north of the Wall. Osha tells the story of how her husband died and came back as a white walker. Bran continues to contribute nothing other than an overgrown bowl-cut. Elsewhere, Arya gets mad at Beric and Thoros when they decide to change course and go after some Lannisters. So naturally the best thing for a weaponless little girl to do is run away in the middle of a war. She doesn’t get far. The Hound happens to be hiding behind a tree right where she runs? How long has he been standing there? What if she ran 20 feet to her left?

So it looks like Arya isn’t going to make it to see Robb in Riverrun. But he’s not there anymore anyway. Robb is on his way to Edmure’s wedding to one of the Frey’s, but they’re late. Apparently there was some traffic in the Riverlands. There must be an overturned carriage. Really Tom, wagon humor? What has become of this recap? Well anyway, it turns out Talisa is pregnant. The King of the North has a little prince or princess of the North on the way.

Now south of the Wall after the climb last week, Jon Snow and the wildlings are walking around. Orell, the one who cut Jon and Ygritte loose during the climb professes his love for Ygritte and says Jon is still a loyal crow. Later Jon tells Ygritte of the past wildling attempt to attack the seven kingdoms. They always lose. It seems like we’re getting somewhere, but then they start making out. Nothing says romance like telling your girlfriend she and everyone she’s ever met is going to die a horrible death. At least in Game of Thrones land.

And finally, it seems that the dynamic duo of Jaime and Brienne are going to be broken up. Jaime is getting shipped back to King’s Landing and Brienne will stay and be abused at Harrenhal. Jaime promises he’ll return the Stark daughters when he gets home. I don’t see that happening. But once he’s on the road, he realizes the soldiers are surely messing with Brienne back in the city and he doesn’t like that. So he convinces the party to turn back. Sure enough Brienne is in an arena fighting a bear with a wooden sword. So that’s where the title comes from. Jaime saves her and causes a standoff between those who were sworn to protect him and the others. They don’t fight and Jaime, brienne and the others head out.

So this episode of Game of Thrones was half action and half talking about action. Robb is pregnant, Theon now has a lot in common with Varys, and the Hound has Arya. Plus I’ve always said there isn’t enough bear vs. human fighting on television these days.