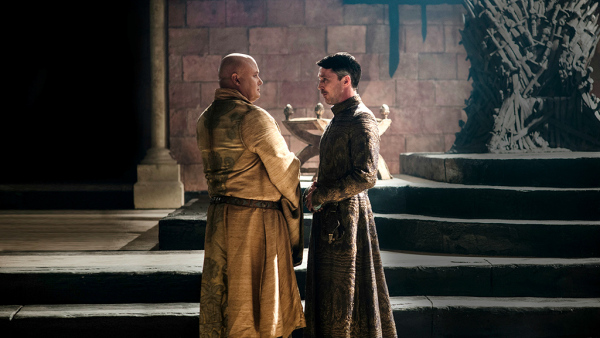 “The Climb” sounds pretty epic. Well you have no idea. “Game of Thrones” season three, episode six sees multiple conflicts come to a head. Daenerys is absent from the chapter, but for the rest of our characters, quite a bit happens. For the first time this season, the show doesn’t feel rushed and we’re rewarded by many memorable moments. Let’s go in order from worst to first in entertainment value.

“The climb is all there is.”

If we’re talking about the worst storyline, where else could we possibly start than with Theon Greyjoy. Being tortured by an unknown guy in an unknown place, we finally get some facts from the assailant as he challenges Theon in a guessing game. Theon guesses his torturer is a Karstark and apparently he’s right, but then the guy says he was lying and tortures Theon by cutting open his finger. Ugh, I’d rather listen to a monologue from Hodor than watch this.

Similarly unnecessary, on the way to the Wall, Osha and Meera Reed argue as Bran plays peacekeeper. Jojen begins having a vision induced seizure while sleeping. He hardly did anything, but it’s clear that the Jojen actor is good. They should just make him Bran. Is it too late to do that?

What’s the handless Kingslayer up to this week you ask? Well, he’s trying to cut his steak one handed. He’s not very good at it. Roose Bolton says he’s going to send Jaime to King’s Landing and in return he will bring with him word the Bolton had nothing to do with the whole hand/knife situation. Brienne can’t go with him though. She’s being held for treason. The King of the North isn’t going to like this.

He’s in the Riverlands negotiating a treaty with the Freys in order to lay siege to Casterly Rock. The demands are actually quite reasonable. They include an apology for breaking his last promise, the keys to Harrenhal and for one of the Frey daughters to marry Edmure Tully, the useless waste of space. Robb says yes. Edmure doesn’t want to, but eventually everyone gets him to consent. So it looks like there is in fact another wedding on the horizon in addition to all those in King’s Landing. George RR Martin must have been on a “Say Yes to the Dress” kick while writing this book.

Arya has an eventful day with the Brotherhood without Banners. After getting an archery lesson, Melisandre shows up with Stannis’ men. Characters from different storylines interacting! It’s almost like we’re watching a big unified story or something.  Well she talks with Thoros and Beric about the whole bringing Beric back from the dead thing. She’s impressed. Then for reasons unknown, she buys Gendry and takes him with her. Arya stomps around yelling at everyone. You know those Stark women like their whining. So, Arya has lost her amigos, first Hot Pie and now Gendry.

In King’s Landing, Sansa tries to buddy up to her future husband (not happening) Loras. It’s awkward. Loras is actually gay and Sansa is an annoying person so they’re not really a great couple. Tywin meets with Lady Olenna to discuss the new wedding orders of Cersei marrying Loras and Sansa marrying Tyrion. The scene is a great power play between the two very demanding characters. When Tywin brings up the Loras sexuality rumors, Olenna counters him with the whole twin lover thing between Cersei and Jaime. Well played, but Olenna concedes when Tywin threatens to assign Loras to the Kingsguard, a position that forces one to give up marriage and their inheritance. The writing in this scene is incredible.

Tyrion and Cersei have a nice chat where they actually show some compassion toward each other. Neither wants to marry who dear old dad told them to. Tyrion then delivers the one sentence summary for the season up to this point. “Seven kingdoms united in fear of Tywin Lannister.” Well, in this episode alone, Cersei, Tyrion, Olenna, Robb and Roose Bolton all directly voice their concerns regarding the Hand of the King.

North of the Wall, there’s a short scene early on in the episode with Sam and Gilly by a campfire. It doesn’t tell us much other than Sam is somehow able to be sweaty when he’s in frigid night conditions. Talented man. Jon Snow, Ygritte and some other wildlings begin to climb the Wall. But before they do, Ygritte tells Jon that she knows he’s still loyal to the Night’s Watch and since they’re now an item, he has to be loyal to her. When they’re climbing, a huge chunk of ice breaks off killing all the wildlings we don’t know. That’s convenient. Jon’s heroics save Ygritte from impending doom and they continue on.

The end of the episode has a very compelling exchange between Varys and Little Finger. After they trade poetic dialogue, Little Finger reveals that he knows all about one of Varys’ most well placed “little birds.” If Tyrion’s comment from earlier in the episode describes “Game of Thrones” in a nutshell, Little Finger’s short speech on “The Climb” is the expanded version. The fact that he’s spent this season talking like Christian Bale’s Batman only makes it more dramatic.

“Chaos isn’t a pit. Chaos is a ladder. Many who try to climb it fail. Never get to try again. The fall breaks them. And some are given a chance to climb, but they refuse. They cling to the realm, or the gods, or love. Illusions. Only the ladder is real. The climb is all there is.”

Over the words, we see Sansa crying at her missed opportunity to leave King’s Landing and a very gruesome scene of Joffrey. Clutching his crossbow, Ros is tied up with arrows shot into her. She is the double agent Little Finger discovered. I don’t think there’s a more hated character in television history than Joffrey. The episode ends with Jon and the three remaining wildlings reaching the top of the Wall.

Wow. I’m going to spend the rest of the week plugging Little Finger quotes into my everyday conversations. “Tom, can you pass the milk?” “Milk is a ladder!” Cue wife eye roll and “Game of Thrones” slowly consuming my life.