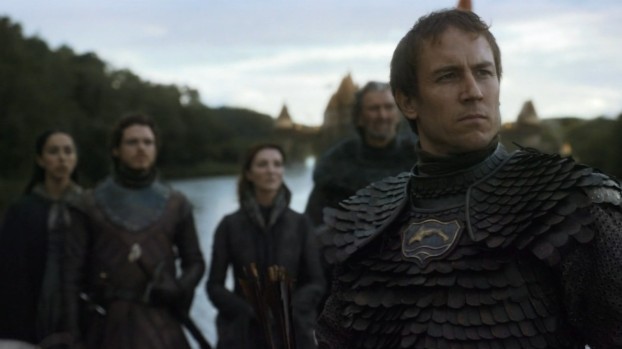 I do not like how quickly this season of Game of Thrones is flying by. Episode three saw some significant moments, but it also confirmed one of my fears. With so many storylines and characters being covered, I don’t think we’re going to see a whole lot from some of our Westeros favorites. This week we don’t get any Bran, (boo)  Joffrey, (woo hoo) or Sansa (ehh) to fill our screen time.

A Game of Fish and Hot Pie

We start out in Riverrun where Catelyn, Robb and others are at the funeral for Lord Huster Tully, Catelyn’s father. It’s a somber scene with a bunch of wood-carved fish all over the place until Cat’s brother Edmure can’t hit his father’s burial boat with a flaming arrow. How embarrassing. If you can’t hit a dead body that’s floating away with a flaming arrow, you obviously don’t have much to offer the world. Luckily, Bryndon the Blackfish, Lord Huster’s brother, does the job. Later Robb, scolds his uncle Edmure, an apparent waste of space, for not following battle orders and allowing the Mountain to escape.

Somewhere relatively close by, Arya confronts the Hound about killing her friend way back in season one. The Hound doesn’t remember and the only reason I do is because I just recently re-watched that episode. Come on, Arya don’t you have bigger fish to fry? Like your grandpa? Ouch, that was too soon. As the group begins to hit the road we learn that Hot Pie is going to stay at the inn to work in their kitchens. Frankly, I’m amazed how sad this makes me. Who knew I cared about Hot Pie? I suppose this is the best ending a bumbling oaf could receive in this story.

Speaking of bumbling oafs, Sam and the Night’s Watch arrive back at Craster’s Keep on their desperate trek back to the Wall. Craster is of course a jerk just like last season and tells the Crows they should eat Sam because he’s so fat. For some reason Sam doesn’t like being offered up on the menu and leaves the room. Outside he watches his old wannabe hubby, Gilly give birth to a boy. If you recall from season two, Craster procreates with all of his daughters and offers up the boys to the White Walkers. Uh oh.

In a short scene just so we don’t forget about them, Mance Rayder, Jon Snow and some others come across some White Walker artwork, a swirl in the snow made of horse parts. The King Beyond the Wall then orders his buddy Tormund to take Jon and 20 or so others to climb The Wall. I can’t wait, but at this pace they’ll probably make it to the wall in 2015.

Ah, our buddy Theon Greyjoy. Well, he escapes, gets caught, we see his butt and then he gets saved again. That’s enough of him for one week.

Across the Narrow Sea, you can tell because apparently it’s always really dusty in that hemisphere, Daenerys and her two knight buddies continue wandering around. They all argue about buying the slave army. She eventually decides to, but it will cost her a dragon. I can’t imagine this will happen, but she makes the deal and buys a new slave in the process even after Ser Jorah and Sir Barristan urge her not to make the trade. It looks like the presence of Sir Barristan may be causing a bit of a rift between the former pseudo-couple, Ser Jorah and Daenerys. That’s both a young king (Robb) and queen (Daenerys) who tell off their older advisors for questioning them. It’s “Game of Thrones”- 90210 out here.

How can we have gone so long without mentioning any Lannisters? In King’s Landing, Tywin holds a small council meeting, which starts off with some musical chairs. Tyrion is named master of coin while Little Finger is off to the Eyrie to try marrying Lysa. Later, when collecting the records from Little Finger, Tyrion buys Pod some lady company because he saved his life last season. It would seem the writers supplemented the accounting conversations with prostitution for one reason or another. Tyrion says that the kingdom’s debt to the Iron Bank of Braavos could lead to them funding enemies to get the money back. Or are we supposed to miss that point while wondering what Pod is up to across town? Word is they were playing Mario Kart and Pod wouldn’t let anyone else play as Yoshi.

Saving the most shocking for last, Jamie Lannister and Brienne are still captured. That’s not shocking, but the moment is coming. So after Jamie freaks out his former captor by saying the men will have their way with her, the pair gets tied up at camp. Sure enough the new captors drag her off. But in an odd moment of likeability, Jamie makes the case that Brienne is worth a lot and they should leave her safe and sell her back to her father. Of course, he makes a claim for his own sale as well. They bought it! Wait, no they didn’t. Those north men are so wily. They are going to stab Lannister’s eye out for thinking he’s better than them. But they don’t. Phew. But I promised something shocking. Oh yeah, they cut his hand off with a butcher’s knife. The king slayer, the queen…lover, Jamie Lannister handless! Tywin is not going to be pleased. I imagine Jamie’s not too pleased either.

We have so many questions for next week’s Game of Thrones. How will Jamie handle receiving the Skywalker treatment? How will we survive without Hot Pie on a weekly basis? And will we ever care what happens to Theon Greyjoy?