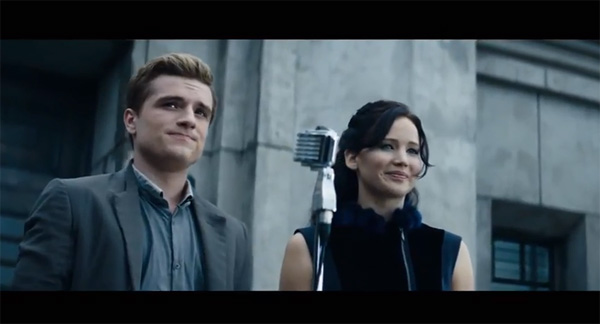 There are very few things I enjoy in this world more than epic movie trailers. The anticipation, the consolidation of exciting moments, the creative editing, they’re just fun. I counted down the days for the first trailer to “Harry Potter and the Deathly Hallows” and I still occasionally watch the preview for “X-Men: The Last Stand” because it’s so darn epic.

The Hunger Games: Catching Fire – Katniss and the Quarter Quell

Well on Sunday night, the trailer for “The Hunger Games: Catching Fire” debuted at the MTV Movie Awards. As a fairly middle of the road fan of the series, I wasn’t really anticipating this premiere. But it would seem I should have been. Liam Hemsworth, who plays Gail, the moderately important and often overhyped third of the series’ love triangle, introduced the clip to the screaming fans.

Based on the second novel in “The Hunger Games” series, “Catching Fire” follows Katniss and Peeta as they deal with the aftermath of their controversial victory. The book first deals with the duo’s victory tour and then being thrust back into the spotlight when victors are forced to play the Hunger Games again. But the trailer only shows the victory tour and the corresponding events. This follows the lead of the first film’s trailer that also only showed the buildup to the Games. This is a very successful tool as it builds hype without playing all of the film’s cards too early.

The trailer is based around a conversation between President Snow (Donald Sutherland) and new Head Gamemaker Plutarch Heavensbee (Philip Seymour Hoffman) discussing their annoyance with Katniss and ways to get rid of her. Should they kill her, discredit her? Fans of the books will read more into Plutarch’s nonchalant recommendation of sparing Katniss’ life. But this scene in particular is a strong example of why the first film was successful and why “Catching Fire” will likely follow suit. Include almost every moment fans would want to see. Then add some scenes they wish they could see. This intriguing exchange is one such moment.

Between shots of this conversation we see many of the memorable moments from the first half of the book. The victory tour stop in District 11 is shown with an old man giving a silent three fingered salute. It doesn’t end well for him. In fact the original clip on MTV actually cut out a split second of the scene where we see a Capitol guard point his gun to the man’s head. The trailer online does show it. We also see Gail getting whipped. Score one for those fans on Team Peeta.

The tension in the trailer is quite high throughout without ever showing a second of the film’s most important act. The Quarter Quell, which is essentially a special edition of the Hunger Games, is never seen. Instead the trailer deals exclusively in hype. It ends with President Snow telling Plutarch that “her entire species must be eradicated.” He’s referring to the victors who have a hard road ahead of them in this film.

Also missing from the trailer are the much-hyped cast additions. No Johanna Mason (Jena Malone) or Finnick Odair (Sam Claflin). That’s fine with me. Something has to be a surprise when the theater lights dim. I expect a second trailer at some point late in the summer will spill the beans on the Quarter Quell for those who haven’t read the books. By the way, if you’re interested in the story and haven’t read the books yet, do it! “The Hunger Games: Catching Fire” hits theaters November 22nd in the US.