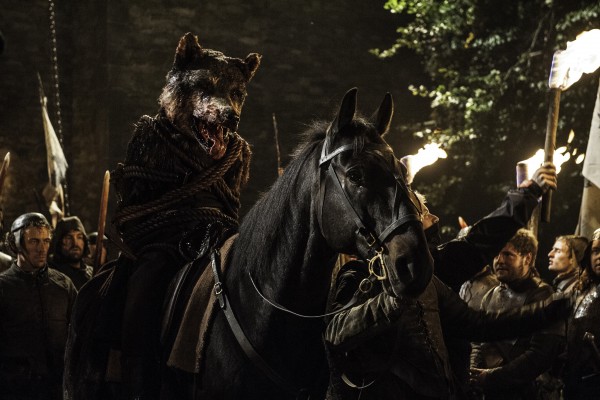 Have you stopped crying yet from the “Red Wedding” last week? It definitely took me some time. But Game of Thrones doesn’t leave us with such tragedy during the long off-season. Instead we got this week’s season finale, which wrapped up stories and ultimately gave us a ton of questions to mull over until next March or April when season four begins. But for now we got to see many of the characters one last time. It was like the last day of school where you even say goodbye to your most mild acquaintance saying you’ll miss them. I’ll even miss you, Theon, you tortured waste of airtime. Let’s recap the episode.

Severed Heads and… Other Parts

Beginning where we left off at the Twins, the Hound is carefully maneuvering his way out with Arya. In the meantime, some of the Frey men have cut off Robb’s head and attached Grey Wind’s head to Robb’s body. We only see this for a few seconds, but it is almost as difficult to watch as his untimely death last week. I’m glad they don’t show anything involving Catelyn or Talisa’s corpses because we Game of Thrones fans are a strong bunch, but we can only take so much. The most important aspect of this scene is how disgusted the Hound appears to be by the scene. He’s finally crossing the line to become a good guy. Maybe? I guess we never know on this show. Later Arya approaches a group of Frey men and stabs one with a knife, killing him. The Hound kills the rest of them easily.

Inside the Twins, Roose Bolton and Walder Frey, who have had a quick assent on our Westeros’ most hated list (above Melisandre, but below Joffrey), discuss the events of the massacre. It would seem Edmure Tully is being held prisoner and Brynden the “Blackfish” escaped. Also, Bolton explains that he sent his bastard son, Ramsay to take back Winterfell from the Greyjoys. There’s our answer we’ve been asking all season. Ramsay is Theon’s captor.

We then cut to the Dreadfort where Ramsay is eating a particularly phallus-like sausage in front of Theon. Remember last time we saw the pair, Theon was relieved of his manhood quite unnecessarily. Ramsay wastes some of our time talking about Theon’s missing appendage and then nicknames him Reek. He then beats him until Theon calls himself Reek. On the Iron Islands, (which we haven’t seen all season until now) Balon Greyjoy and Yara read a note from Ramsay saying to withdraw all the Iron born from the north or he’ll keep torturing Theon. He also sent a nice gift. It’s his d— in a box. Well thankfully, they don’t show us the actual item. After Balon states that he is going to leave Theon there, Yara announces that she is bringing the best men and going to march on the Dreadfort. For some reason the scene showing her and her men prepping the ship is inspiring. We’re losing characters very quickly so saving Theon, who may have the desire to avenge Robb’s death, has suddenly become more important.

Down south with our old pals the Lannisters, Joffrey is acting like his usual tool self at a small council meeting. He’s all excited about Robb’s death saying he is going to serve Sansa her brother’s head. Tyrion threatens Joffrey since Sansa is now his wife. But as we have seen all season neither Tyrion nor Joffrey does anything. Tywin orders Joffrey to bed because he’s running things and everyone, except Joffrey, knows it. After everyone leaves, Tywin tells Tyrion he had considered murdering him as a baby. It’s really just a perfect lead in for father’s day this week. Every few weeks in Game of Thrones 3.0 Tywin had to explain another terrible way he hates Tyrion. Why all of this is coming out now, I don’t know. Tyrion attempts to tell Sansa about her brother and mother, but she has already heard.

Across town, Varys offers Shae some diamonds in order to leave town. His hope is that without her to worry about, Tyrion can help make the world a better place. In response Shae refuses. But her persona has turned into that of a jealous whiner, so I wouldn’t expect anything else form her. In a later scene, Cersei visits Tyrion where she discusses how her children were all she lived for and that Tyrion should get Sansa pregnant for her sake. We leave the Lannisters for the season with Jamie finally making it back to King’s Landing. He goes to see Cersei, whose excitement turns to horror when she sees his handless arm. Are we supposed to feel happy that the incestuous evil twins are back together? Sorry, not going to happen. Not even on Game of Thrones.

Arriving at the Wall, Bran and his crew spend the night in one of the abandoned castles. A late night intruder turns out to be our pal Sam with Gilly and her baby. Am I so deprived of character interaction that I cheered out loud when I saw that the Sam and Bran storylines were intertwining? Yes! It doesn’t last long though. Sam proves he knows Jon and has heard all about Bran and Hodor. He refuses though when Bran asks him to take them north of the Wall. We leave Bran, Hodor and the Reeds as they embark into wildling and white walker territory. Sam and Gilly arrive at Castle Black with Sam being forced to defend his actions to Maester Aemon. After a few moments where we see just how much Sam has grown since his laughable origins in the Night’s Watch, Aemon orders all the ravens be sent out warning Westeros about the white walkers.

Jon Snow, having fled the wildlings last time we saw him, steps off his horse to clean some of his wounds. But don’t look now, Ygritte has been tracking him! Angry about him leaving her, she shoots him repeatedly with arrows. Well, I figured she’d be angry. Jon gets out of there and passes out on his horse as he arrives at Castle Black. Sam and Pyp see him and order he be helped.

Dragonstone and the Dragons

On Dragonstone, Davos befriends Gendry, who is being held prisoner. After being unable to convince Stannis to spare the boy’s life, he frees Gendry and sends him on his way. As is this case with almost everything Davos has done this season, Stannis is angry and sentences the “onion knight” to death. Luckily, Davos learned to read with the help of Stannis’ daughter, Shireen. Before getting dragged away, he tells Stannis and Melisandre about the letter from the Night’s Watch. Melisandre looks in the flames and decides Davos will be needed in this war up north.

The Game of Thrones brass throws us a Daenerys scene to end the season even though she won her battle at Yunkai in the previous episode. She and her army stand outside the city waiting to see what the freed slaves are going to do. Turns out they’re happy about it. The huge crowd begins chanting “mhysa,” which translates to mother. She enters the crowd and they’re all happy and stuff.

So that’s it, game over for Game of Thrones. I hope you enjoyed this season as much as I did. We had new characters, a bunch of unfortunate character deaths and many memorable moments. Check back with Geek Insider, where I will be posting my final commentary on the season as a whole and what I hope to see next season. And don’t forget, winter is coming.