The keyboard and mouse are used for both work and play. Many of you spend several hours a day jamming away at your laptops. Keyboarding has become such an integral part of life that it is taught in public elementary schools. So what happens when the traditional concept of a keyboard and mouse is turned on its head? Introducing the KeyMouse, a product in the development that hopes to change the way keyboards are used. The KeyMouse is a combination of the two technologies engineered for ergonomic comfort and effective utility.

The KeyMouse uses Bluetooth wireless connectivity via USB. While it has a traditional qwerty keyboard (see featured image), one of the KeyMouse’s standout feature is its utility keys. Because of its design, the KeyMouse has specific thumb keys that a keyboard cannot match. 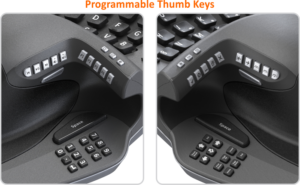 These thumb keys can be used for their labelled purpose or for user macros. These are especially useful for CAD designers, programmers, or even casual web surfing. Even a casual user can find usefulness in the thumb keys. You could connect them to email, Facebook, Twitter, LinkedIn, etc. if you’re not a hardcore programmer or designer.

The KeyMouse’s calling card is its comfort. It has arched rubber palm grip for your hands. It is designed so that your wrist doesn’t have to configure itself as you type; the keys are already in comfortable reach of your fingers. Additionally, its two part design allows for better posture. With laptops of keyboards a common issue is the poor posture developed when spending many hours working or playing at a single keyboard. With the KeyMouse, users can sit back and focus on the screen without having to get up close to it to type.

The above information is a very basic overview of the KeyMouse’s redeeming attributes. It has several more features and planned additions that can be reviewed on Kickstarter here. Some of these features include a high resolution laser mouse sensor, backlit keys, diodes on keys, and a Li-Ion rechargeable battery. These do well to give the KeyMouse a refined touch, something we would expect out of technology of this caliber. As the KeyMouse finishes hopes to be reaching sales by Fall of 2015, its developers hope to perfect the polishing features.

While it is clear the KeyMouse is a compelling concept, there are several concerns for prospective owners. Firstly, is the software that comes with the hardware going to be reliable?. It is planned to update as the product develops, which raises questions of quality control. What if the KeyMouse requires maintenance that cannot efficiently be handled by KeyMouse’s software team? Additionally, it appears that it may be more geared towards Windows operating systems. Software developments will be first released for Windows, followed by Linux and Mac. For the many Mac and Linux users, this seems like somewhat of a deterrent. The KeyMouse has also not experienced enough testing for Mac products.

The design of the KeyMouse is excellent but it may seem like too much of an endeavor for casual users to acclimate themselves to a two-piece keyboard. As the cliche goes, you can’t teach an old dog new tricks. For those who have grown up using a keyboard and mouse, spending time and money on the KeyMouse may not be worth the effort. However, for CAD designers and programmers this product could be incredibly useful and desirable. KeyMouse’s success will hinge upon who they market to. Technology oriented businesses could have much to gain from purchasing the product. They may also be the only ones with the funding; the KeyMouse will retail at $299, a pretty penny for  a typing apparatus.