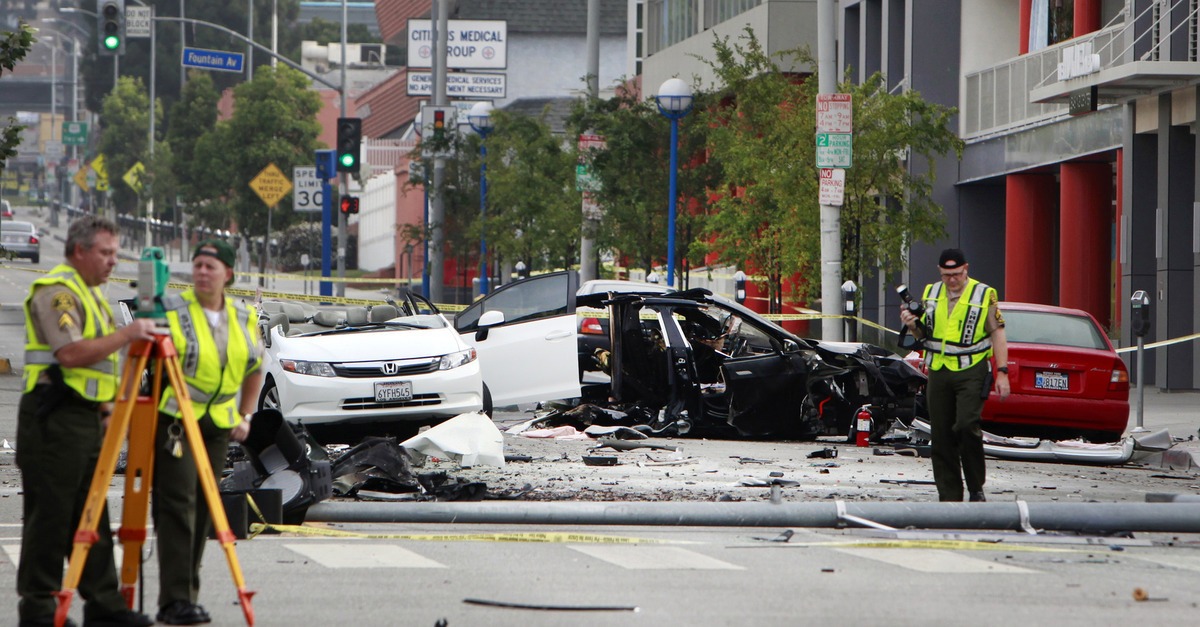 Tesla’s Model S Electric vehicle has received rave reviews for safety. However, there has been lingering worry that the battery that powers the electric vehicle, could catch on fire.  On July 4th the world witnessed its first Tesla Model S accident that led to a fatality.

The First Deaths from a Model S

Joshua Michael Flot, a 26 year old Californian, died on July 7th, from injuries sustained in a high speed crash on July 4th. Flot had stolen the vehicle from a Tesla service center. The police were notified and eventually gave chase. Flot pushed the electric car to speeds of 100 mph and up, recklessly fleeing law enforcement. He eventually lost control, and crashed into several vehicles, and a pole, which caused the car to not only split in two, but eject Flot from his seat. The front half came to a stop in the middle of a street and caught on fire. The rear half crashed into the side of a building where luckily no one was injured.

The debate here, is with the lithium-ion battery. There have been other incidents with Tesla vehicles, where the battery caught on fire. None that led to a fatality like this one. Since those fires, Tesla has reportedly reinforced the battery with three underbody shields. Whether or not the stolen Model S had those shields remains to be seen. Tesla vehicles made after March 6th have the additional shielding, while those manufactured before that date, can be retrofitted with no additional cost to the owner. It can be argued however, that whether the vehicle had the shields or not, driving recklessly at such a high velocity, the end result might have been the same. Tesla insurance rates do not currently reflect the added fire risk.

Another accident involving a Model S, on the same day, in Palmdale California, claimed the lives of 3 people. The Model S rear ended their Toyota Corolla. The Corolla then burst into flames. The Toyota’s driver, a 13 year old, and an 8 year old were trapped in the vehicle, and died. The 58 year old driver of the Model S, Ric Garrison,  only sustained minor injuries.

Accidents are sometimes unavoidable. No one wishes to hear about accidents leading to death or even ones that require retaining the best car accident attorney in Knoxville, but it happens every day. The benefits of this technology, outweighs the recklessness of a few individuals.  These tragic deaths would not have occurred, if that young man had not stolen that car, and if that older gentleman, had been more careful behind the wheel. The disparity in their ages is a telling story; one 26 years old, the other 58. It doesn’t matter who you are or how old you are, both accidents could have been avoided.

According to Elon Musk, the chance of a Model S battery catching on fire is roughly 1 in 8000. You have a better chance of a traditional gas powered vehicle catching fire. After these two incidents however, there will likely be individuals who remain cautious about either buying, or getting into a Model S. The fact is, these folks are in a minority. Tesla’s stock, may have dipped slightly after July 4th, but it still remains strong.

Tesla remains at the forefront of  beginning the unavoidable, but urgent shift to reduce our dependence on fossil fuels. Using wind and water turbines, along with solar panels to generate electricity, makes owning an electric car, not only a wise choice, economical (in the long run),  but also helpful to the future of the environment our children will inevitably inherit from us. These accidents serve as a reminder, that it is not the technology that is at fault here, it is human negligence.

Study Shows That Snapchat is Primarily Used to Send Funny Content, Not ‘Sexts’