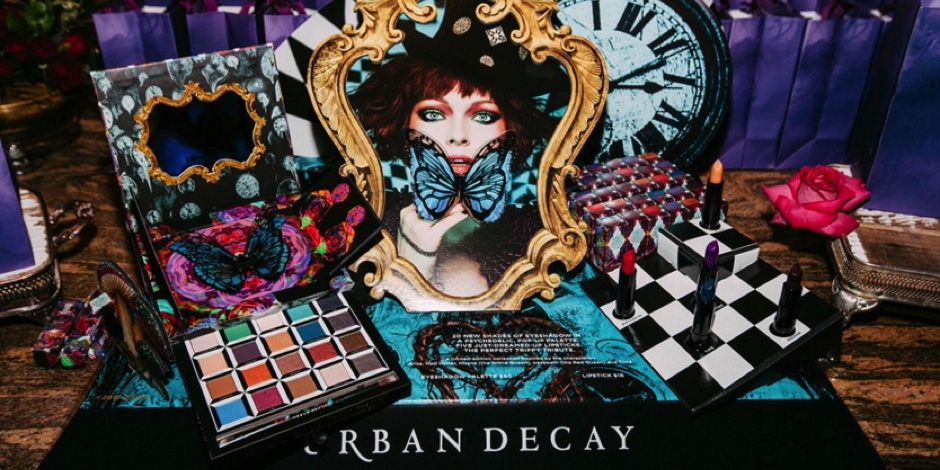 The much-anticipated film Alice Through the Looking Glass, produced by Tim Burton and directed by James Bobin, sparked some colourful collaborations and marketing strategies with the American cosmetic brand Urban Decay.

“When Disney asked us to jump down the rabbit hole with them again” Urban Decay says, “and collaborate on an all-new spectacular adventure, of course we said yes. Inspired by the new fantasy-adventure film release of Disney’s Alice Through the Looking Glass, this limited-edition, pop-up palette is a trippy tribute to our favorite characters from the film.”

Aside from the cool, vibrant packaging, the eyeshadow palette comes with twenty unique colours and names inspired by the film, like Hatter, Bandersnatch, Chessboard, and Royalflush. This exclusive collection also contains five lipsticks with names that also pay homage to the film, including Alice, MadHatter, Mirana, Iracebeth, and Time.

Along with Urban Decay, makeup brands like NYX cosmetics have also hopped onto the fairytale bandwagon. The fifth annual NYX Face Awards was launched on YouTube on April 4th, and will end on August 20th, to find this years Beauty Blogger of the Year. As for the latest challenge, beauty guru’s were asked to transform themselves into supernatural characters seen in fairytales.

Check out the amazing transformations from the talented artists below!

Geek Fashion: A Little Minimalist Inspiration for Your Closet