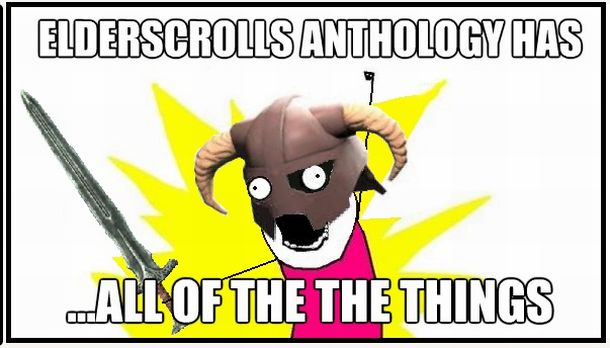 Bethesda have announced something that might be the best thing since someone went “bread is just so darn delicious, I want it pre-cut, so I can gorge myself on more of it’s carby goodness sooner!” This September they will be releasing an Elder Scrolls Anthology for a price that doesn’t mean I have to sell unicorn tears to be able to afford it.

When I say ‘anthology’ I don’t mean that they’ve smooshed Morrowind and Oblivion together and shouted “Look! It’s your favourite games! Right here, in an ‘anthology’!” No, those crazy kids at Bethesda actually looked up the word ‘anthology’ and are bringing us something that best fits with the definition of the word.

Here’s the beautiful list of things that are beautiful and in their anthology:

After looking at this list your brain might be exploding with happy, but in your heart, you’re worried. You want to believe it, but you just can’t. You’re asking yourself “So, how much of the Elder Scrolls do I get in the anthology?”

Let me tell you in meme-

Plus, there’s maps.  Real maps (of their fictional universe)! If I could have studied Elder Scrolls maps, instead of boring ‘Earth’ maps at school, I would have won Geography. But I’d still get horribly lost trying to find my way out of the Thieves Guild in The Ratway.

It’s not cheap, especially if your money is really attractive, but this is a small price to pay for a huge chunk of the Elder Scrolls Universe.  In fact, don’t even think of it as paying, think of it as investing in a vital piece of RPG memorabilia/history. No matter what happens with their MMORPG, Bethesda have been a solid contributor to the RPG genre through their Elder Scrolls games. This is, in my humble opinion, a must have for any RPG fan.

You should probably also keep up with their blog because they seem to have some sweet deals for those with the cash to splash now, but the deals are time sensitive. I used to buy all the Bethesda deals, but then I took an arrow to the knee.