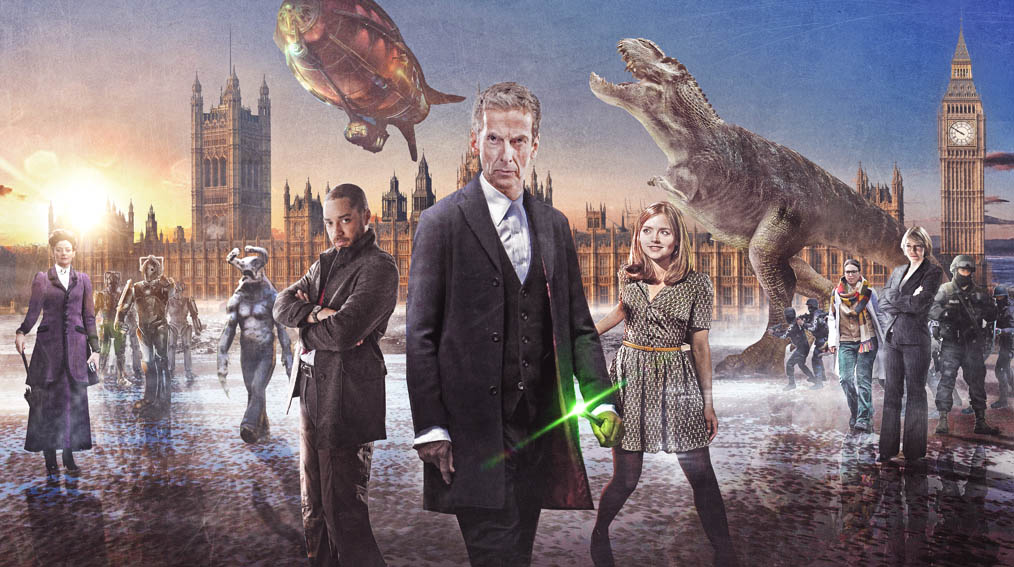 The Doctor is back once again, freshly regenerated with a new face and a new accent to go with it.  There’s a bit of old and a bit of new in the Season 8 premiere, “A Deep Breath.”  Peter Capaldi brings a more mature acting style but with just enough infantile goofiness to lighten the mood.  Clara Oswald along with Madame Vastra, Strax, and Jenny return to deal with the aftermath of this regeneration.  It’s a premiere that promises a real change in the dynamic between The Doctor and his companion.  So, without any more delay let’s a trip through time and check out “A Deep Breath.”

The episode begins in the most attention grabbing way possible: a giant tyrannosaurus rampaging through Victorian London.  Madame Vastra is quick to investigate with her trusty sidekick, Strax, and lover, Jenny.  Vastra uses a sonic device to contain the dinosaur within the Thames, so as to minimize any ensuing destruction.  Just as she does so, the lizard spits out a familiar blue box.  Yes the Doctor has arrived having accidentally brought a prehistoric monster along with him.

However, the Doctor seems strange.  Or at least, stranger than normal.  He can’t seem to remember anyone’s name, acting almost as if he’s meeting his friends for the first time.  Vastra and Clara make sure he gets to bed, but Clara feels like he isn’t truly The Doctor anymore.

Vastra is offended by this, scolding Clara for judging someone on their appearance.  This seems to be a nod to many fans that were concerned about the oldest Doctor to appear in New Who.  Clara is reminded that the Doctor was never a romantic possibility for her and the fact that his age is slightly more apparent should not change their relationship.  While all this is happening, the Doctor sneaks off to flirt with a dinosaur.

Continuing his ability to talk to animals, the Doctor tries desperately to apologize to the Tyrannosaur he displaced.  However, as he does so, the dinosaur spontaneously combusts.  The Doctor is eager to solve the murder of his reptilian friend, and even more so when he finds that there have been similar combustions throughout the city.  He rushes off without his friends, trying to solve the mystery and also trying to find out who he is.

The Doctor finds himself transfixed by his own image in a mirror, struggling to reconcile his inward identity and his outward appearance.  From the wrinkles to his gray hair to his “attack eyebrows,” all seems unfamiliar.  After horribly frightening a homeless man, he spots something in the paper that could be his next clue.

Clara spots an interesting blurb in the paper as well: an ad for an “Impossible Girl” to meet at a restaurant called Mancini’s.  She goes and finds the Doctor, who seems to be under the impression that Clara placed the ad.  The two realize this was no normal restaurant, but instead a hive of cyborgs looking to harvest human tissue to rebuild themselves.

The two are taken underground where Clara is separated from the Doctor.  The robots can’t tell she’s human unless she’s breathing. So, she takes a deep breath and tries to walk out undetected.  Unfortunately, like most humans, she has to breathe and is captured.  The lead cyborg demands Clara tell her where the Doctor is under threat of death.  However, Clara is quick to call its bluff and starts interrogating the cyborg on its motives.  Apparently the robots have been harvesting human parts to repair themselves and their ship in order to eventually reach paradise.

That’s right, this episode is a sloppy rehash of Moffat’s season two episode, “The Girl in the Fireplace.”  They call attention to this, even saying they are the same kind of robot, but the repetition feels pointless and uncreative.  The only reason is to create a parallel between the Doctor’s new face and the robot’s stolen face.

Anyway, Clara calls for backup and Vastra, Jenny, and Strax repel down on ropes to save the day.  The Doctor pursues the head Cyborg to his escape pod, a hot air balloon made of human skin.

The two bicker about their moral codes and the existence of paradise while the Doctor’s friends struggle to hold their breaths in the face of the cyborg hoarde.  The robots stop for good as we cut to the cyborg impaled on a cross atop a church.  It’s left ambiguous whether the robot jumped, realizing there was no paradise, or the Doctor pushed him out.

As Clara is dropped back off at home, she gets a call from an old friend.  Matt Smith, just before his regeneration called Clara in the future, urging her to stay with a still unstable Peter Capaldi.  She finally sees that despite his changed face, he is still The Doctor.  The episode closes with a mysterious woman claiming to be the Doctor’s girlfriend welcoming the cyborg leader to paradise.  Who is she?  What kind of paradise is she talking about?  Only time will tell.

Fans of Steven Moffat’s writing will find many of his most common tropes here.  The Doctor seeming broken post-regeneration feels reminiscent of the season five opening.  The story is sloppy but the dialogue, thematically engaging.  We get to see the full repercussions of the Doctor’s regeneration with some decent comedy from Vastra and friends.  The dinosaur was mostly there for attention grabbing and adds very little, while the cyborg felt too unoriginal to be engaging.  However, the character driven moments were powerful and there were some interesting reveals throughout the mystery.  The dynamic between the Doctor and Clara seems to have shifted in an interesting direction with more bickering and less flirting.  All in all, a great opening that promises more changes in the Doctor’s world soon to come.

“From the wrinkles to his gray hair to his “attack eyebrows,” all seems unfamiliar.” The face was not unfamiliar. The problem was that it was familiar and he knew the face he just doesn’t remember or why he currently has it. It connects to the uncertainty that fans had of having the same actor play both roles.

So, are you saying the line is canonically stating that the doctor stole the face of that pompeii guy with the intention of conveying some message? Or is it just a nod to the fans?

I think it’s both. Some where along the story line I think having this face will come into play for some kind of meaning. It’s also a nod to fans. The writers are very good at hiding subtle meaning behind actions and then revealing the connections much later. I also hope they will explain why he is now Scottish.
When in the alley he asks the homeless man “Have you seen this face before?”
“It’s funny because I’m sure I have.” as he stares at himself in the mirror “Why is one, why did I choose this face?”