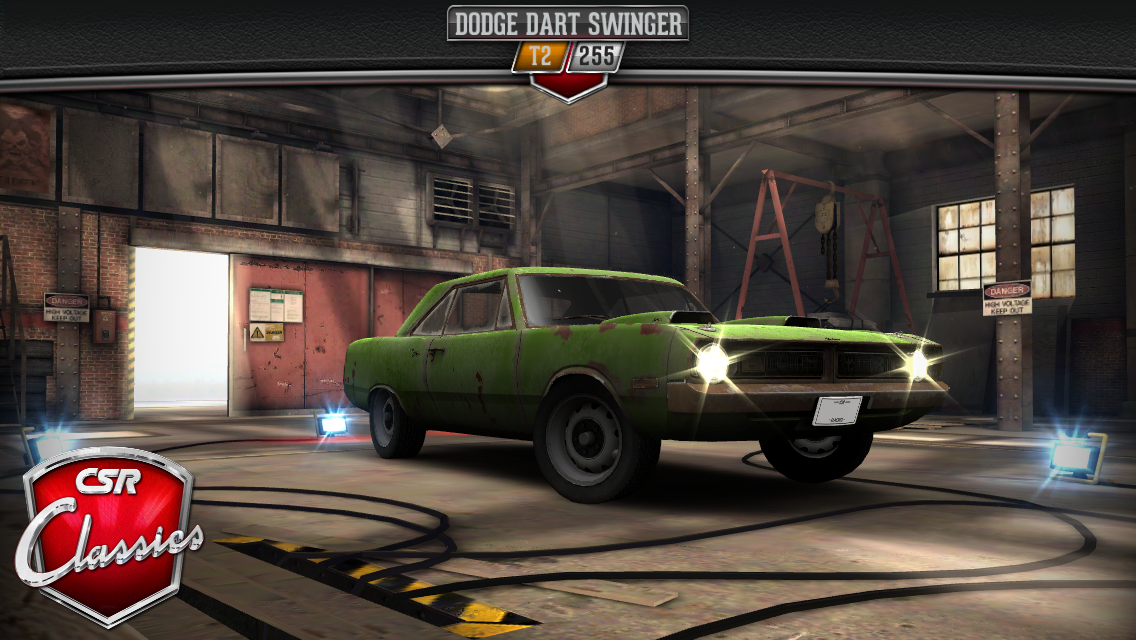 Being a Blackberry user for the last two years, the world of mobile gaming has almost completely passed me by. I’m fairly sure Snake or Tetris would’ve been a bit of a stretch for my wheezing Bold. So now having escaped from the cave and got myself a nice new iPhone 5C (more on that in another post), I’m only now starting to realize the potential of my phone as a gaming device. One of the first games I happened to download is CSR Classics, a free-to-download game exclusive to iOS involving classic cars, street racing, and funky music. All of these are things that will appeal a game to me, so I downloaded it and gave it a try.

CSR Classics is part of the ongoing CSR Racing series of mobile games. Imagine if you will a stripped-down Need for Speed Underground: buy a car, street race it against others, earn money, tune up your ‘ride’, beat bigger and badder foes, and keep going until your king of the streets. I was pleasantly surprised at the varied selection of classic cars; its the V8 American beasts that most people (including me) will plump for, but there’s also some European and Japanese rarities in the mix. And there’s a nice touch in the form of the ‘loved/unloved’ dynamic: ‘loved’ cars are shiny and have been kept in factory condition, but command higher prices, whereas ‘unloved’ cars are rustbuckets held together with old chewing gum and spit and will therefore need more money spending on them, but are cheaper to begin with. It reminded me of the used car showrooms in the Gran Turismo series, and in a way that can describe CSR as a whole: a grab-bag of ideas from other, bigger racing games slimmed down into a smooth, bite-sized mobile package.

All the racing is drag racing on the streets, so there’s no frantic tilting of the screen here: just a Bop-It style battle of co-ordination, making sure the revs are just right as your car launches off the line in a cloud of tire smoke and timing each gearshift to perfection. And the deceptively simple game play mechanics are well implemented and create an addictive little game. The graphics also help, with a lavish Las Vegas-style cityscape forming the backdrop to your races, where the lovingly rendered cars do battle on streets brimming with hissing manhole covers, glowing streetlights and sparks flying and flashing from your machines. Like Guitar Hero, it’s all details you’ll probably miss as you strive to tap buttons in sequence, but I’m glad they made the effort nonetheless.

Obviously there’s only so many times you can do this before it gets boring. But CSR have thought of that, with the ‘Gas’ mechanic. You race until your tank is empty, and when you’re out, there are a few things you can do to top up. The most common one is to just leave the game alone for a bit, go and do something else, and let your tank top up over time. It’s essentially the game telling you to sod off and do something with your life rather than obsessively grinding away – but it works. The thing with mobile games (such as Angry Birds) is that they are built to be quick to get into, and something you whip out to play for ten minutes or so. So this mechanic works well. 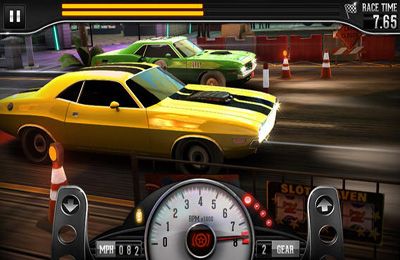 The story mode itself is a fairly linear progression with various different types of race all leading up to clashes with ‘crews’, where you chalk off victories against their lieutenants before defeating the leader. Who was it who decided that street racing was like the mafia, anyway? I remember growing weary in Need for Speed Carbon when burly white dudes would get up in my grills about ‘their turf’ and ‘you goin’ down fool’ and wondering why I couldn’t just shoot them in the face like I could in GTA. In this case fortunately the crew members don’t have voice actors, so they aren’t very annoying.

Overall what we have here is a simple and addictive game (it’s wasted enough of my time lately) with lavish graphics, a well-balanced difficulty curve, and a wealth of customization tools and cars on offer. The only drawback is a lack of multi-player; it would be nice to go head to head with a friend in the same room, Pokemon DS style. But for a fan of classic muscle cars and drag racing like me, it’s ideal. And all for the price of nothing. There’s obviously a gamut of in-game purchases you can buy with real money, which people complain very vocally about on internet forums, but in my experience so far none of it is vital for your progress; it’s just window-dressing. There’s the odd uber-challenge that is only possible with a part paid for with a micro-transaction, but not being obsessed with 100% completion this really didn’t bother me.

Anyway, my tank’s just filled up so I’m off to race some more. You’ll find me in the rusty green Dodge Dart. Try and keep up