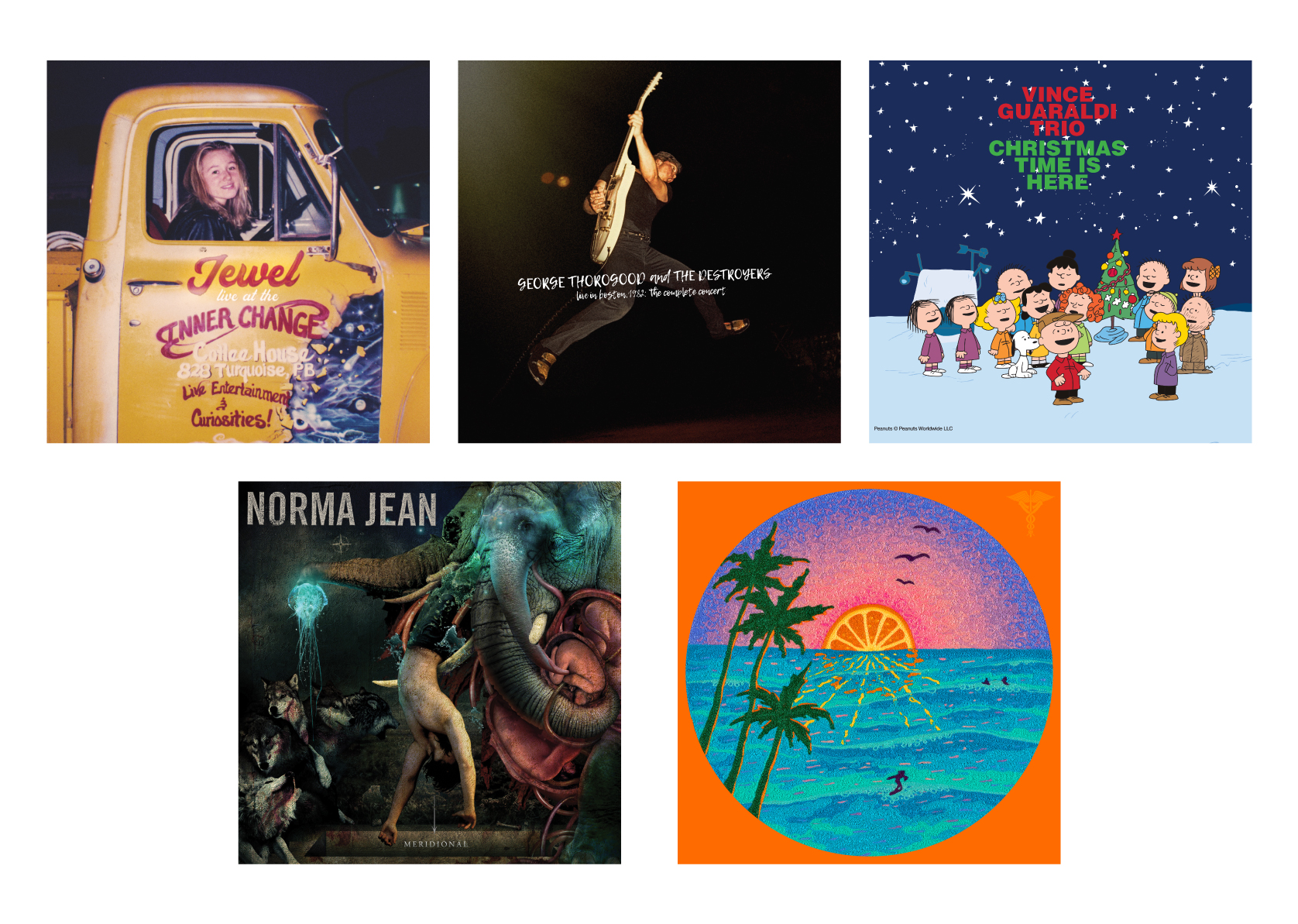 Los Angeles, CA (October 7, 2020)—Craft Recordings announces its exciting line-up of exclusive titles for Record Store Day’s tenth annual Black Friday event, taking place at independent record stores across the country on Friday, November 27th. This year’s sonically diverse selections include two live albums: the first-ever release of Jewel’s early coffeehouse sessions, Live at the Inner Change, and George Thorogood and The Destroyers’ blistering Live in Boston, 1982: The Complete Concert. Also available is a tenth-anniversary reissue of Meridional from Georgia metalcore stars Norma Jean, as well as the latest installment of the popular Jazz Dispensary series, Orange Sunset, which features choice funk, soul, and jazz cuts. Rounding out the titles is a 7” of “Christmas Time Is Here” from Vince Guaraldi’s A Charlie Brown Christmas to kick off the holiday season.
Since 2008, Record Store Day has championed the culture of the independent record store, offering music lovers the chance to pick up exclusive releases and support their local music retailer at the same time. Record Store Day’s Black Friday is no exception, and now—more than ever—is the perfect time to show love to our local independent retailers and our favorite musicians. While the day after Thanksgiving is the start of the biggest shopping season in the country, this special event subverts the mass consumerism model—instead, placing the focus on creating special limited-edition releases from revered musical artists. For a full list of participating retailers, visit RecordStoredDay.com.

As Jewel celebrates the 25th anniversary of her landmark 12x Platinum debut, Pieces of You, this previously unreleased live performance from 1994 offers fans a chance to hear the GRAMMY® Award-nominated singer-songwriter nearly two years before she became an international sensation. These captivating, formative performances were recorded at San Diego’s Inner Change coffeehouse, where the promising young artist honed her craft, and later, was discovered.
In the liner notes for a forthcoming Pieces of You 25th-anniversary reissue, Inner Change owner Nancy Porter recalls, “This is where she really built herself, developed her music, and I think everyone felt that. And the bigger the crowd got, the better she got…People would come in and just be in awe.”
The two-LP set features remastered audio from the legendary engineer Bernie Grundman and includes early versions of such favorites as “Morning Song,” “I’m Sensitive,” and Jewel’s debut hit single, “Who Will Save Your Soul.” Limited to 3,000 copies worldwide, each individually numbered album includes a replica of the original show flyer, designed by Jewel herself.
Tracklist – Live at the Inner Change:
Side A
1. Who Will Save Your Soul
2. Pieces of You
3. Little Sister
Side B
1. Near You Always
2. Painters
3. Morning Song
Side C
2. Adrian
2. I’m Sensitive
3. Don’t
Side D
1. Daddy
2. Angel Standing By
3. Amen 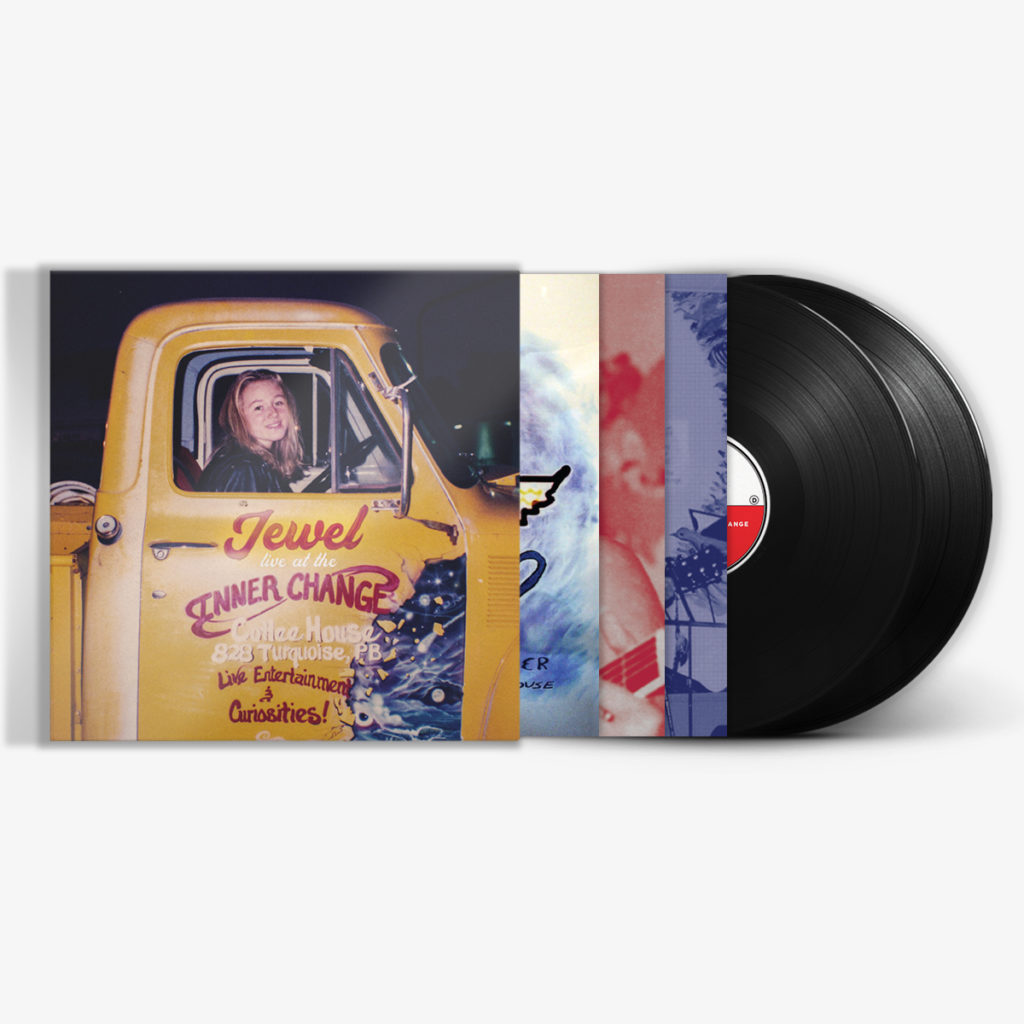 George Thorogood and The Destroyers — Live in Boston, 1982: The Complete Concert (4 LPs, Red-Marbled Vinyl with Poster)

This comprehensive reissue of George Thorogood and The Destroyers’ Live in Boston, 1982 captures the band’s triumphant Bradford Ballroom concert in its entirety for the very first time. Full of energy, power, and focus, Thorogood and The Destroyers play a blistering set that includes such classics as “Bad to the Bone,” “Who Do You Love?” and “Move It on Over.” Newly remastered by the GRAMMY® Award-winning engineer Paul Blakemore, the 27-track Live in Boston, 1982: The Complete Concert adds 12 previously unreleased tracks to the original 2010 release.
“1982 was an absolute high-water mark for us,” exclaims Thorogood, whose band had recently scored a supporting slot on the Rolling Stones’ tour, performed on Saturday Night Live, and released their fifth studio album. “Everything was going our way and it shows in this recording… This is George Thorogood and The Destroyers at our best!”
Limited to just 1,800 copies, this special Black Friday edition comes pressed on four red-marbled vinyl LPs and includes new liner notes, plus an eye-catching poster.
Tracklist – Live in Boston, 1982: The Complete Concert:
Side A
1. House of Blue Lights
2. Kids from Philly
3. Who Do You Love?*
Side B
1. I’m Wanted
2. Cocaine Blues*
3. One Way Ticket
Side C
1. One Bourbon, One Scotch, One Beer
2. As the Years Go Passing By
Side D
1. Spoken Introduction: The Dance Floor*
2. It Wasn’t Me
3. Bottom of The Sea*
4. Night Time*
Side E
1. New Boogie Chillun’
2. I’ll Change My Style*
3. Miss Luann
Side F
1. Madison Blues*
2. The Sky Is Crying*
3. Can’t Stop Lovin’
Side G
1. Spoken Introduction: Audience Participation*
2. Same Thing*
3. Bad to the Bone*
4. Move It on Over
5. Wild Weekend
6. Nobody but Me
Side H
1. No Particular Place to Go*
2. Ride on Josephine*
3. Reelin’ and Rockin’*
* Previously unreleased 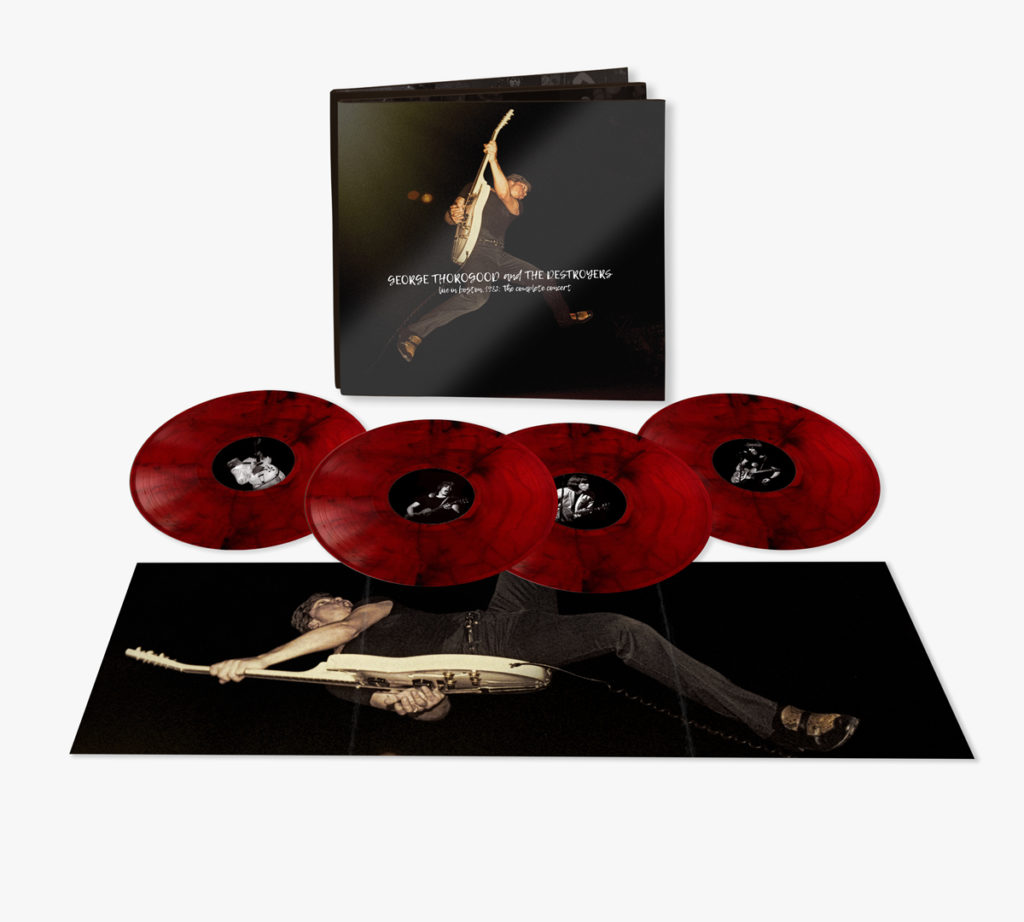 2010’s Meridional is the fifth studio album from the GRAMMY®-nominated metalcore band, Norma Jean, and marked the Georgia band’s debut with Razor & Tie. Produced by Jeremy SH Griffith (Underøath, Johnnyswim, Five Iron Frenzy), Meridional—whichfeatures such fan favorites as “Leaderless and Self Enlisted” and “Deathbed Atheist”—received wide praise from the likes of Revolver, AbsolutePunk, and Exclaim!, which ranked the LP among one of the best metal albums of the year. AllMusic, meanwhile, praised that Meridional shows “a band that has really hit its stride creatively, taking the techniques it has developed and putting them all together into one enjoyable package.” Limited to 3,400 copies, this special tenth-anniversary reissue comes as a two-LP set pressed on turquoise marble vinyl.
Tracklist – Meridional:
Side A:
1. Leaderless and Self Enlisted
2. The Anthem of The Angry Brides
3. Deathbed Atheist
4. Bastardizer
Side B:
1. A Media Friendly Turn for The Worse
2. Septentrional
3. Blood Burner
4. High Noise Low Output
Side C:
1. Falling from the Sky: Day Seven
2. Everlasting Tapeworm
3. Occidental
Side D:
1. The People That Surround You on a Regular Basis
2. Innocent Bystanders United
3. Oriental 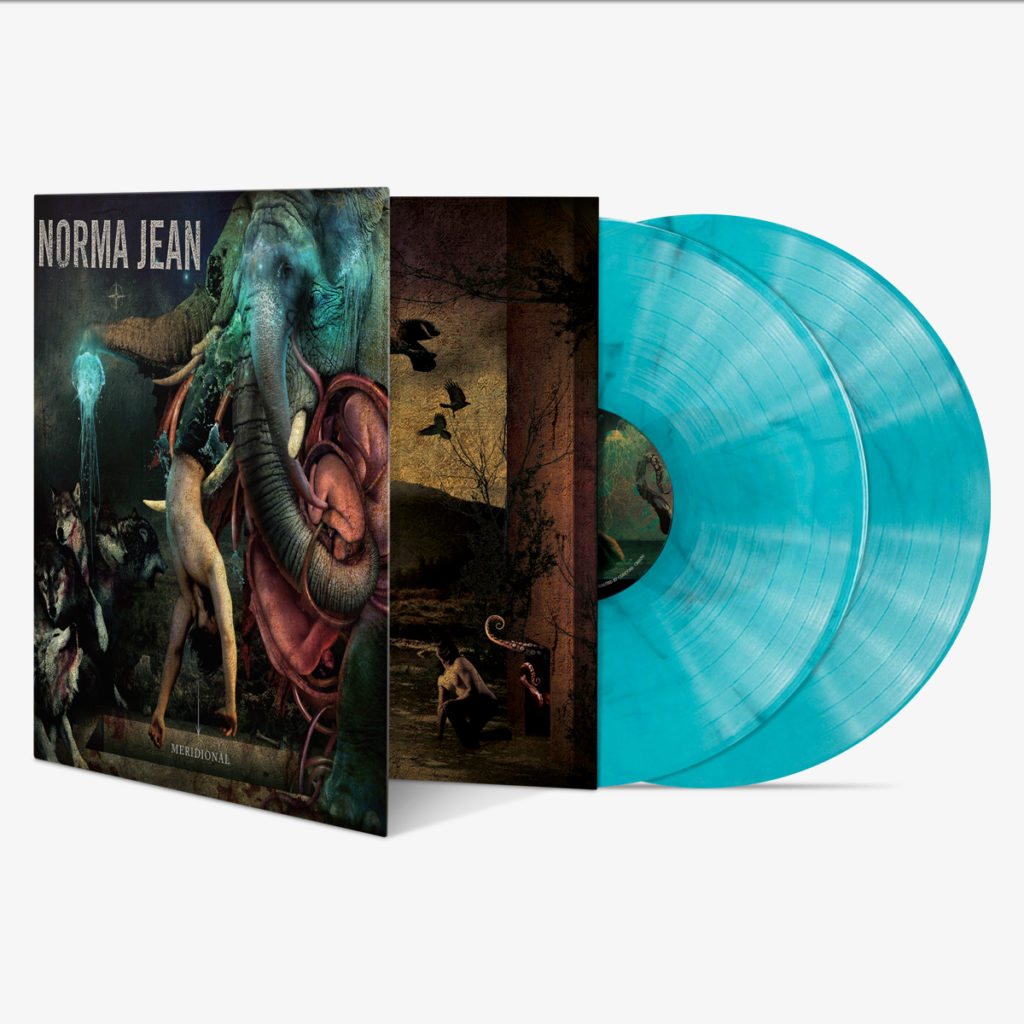 Vince Guaraldi’s timeless score for the 1965 television special, A Charlie Brown Christmas, endures as one of the most popular holiday albums ever and one of the best-selling jazz records in history. The soundtrack, which introduced generations of children to the joys of jazz music, features a mix of traditional yuletide fare—arranged in Guaraldi’s playful style, plus originals, like the instantly recognizable “Linus and Lucy,” and “Christmas Time Is Here.” The latter song, now a holiday standard, was the only vocal track on the album, featuring young choir members from the Bay Area’s St. Paul’s Episcopal Church. Now, for the very first time, a 7” single of the song will be available, featuring the original vocal version on side A, with an alternate vocal take on side B. Released in conjunction with the 70th anniversary of Peanuts, this collectible single is pressed on green vinyl and will be limited to 5,000 copies.
Tracklist – Christmas Time Is Here:
Side A
1. Christmas Time Is Here (Vocal)
Side B
1. Christmas Time Is Here (Alternate Vocal Take 5) 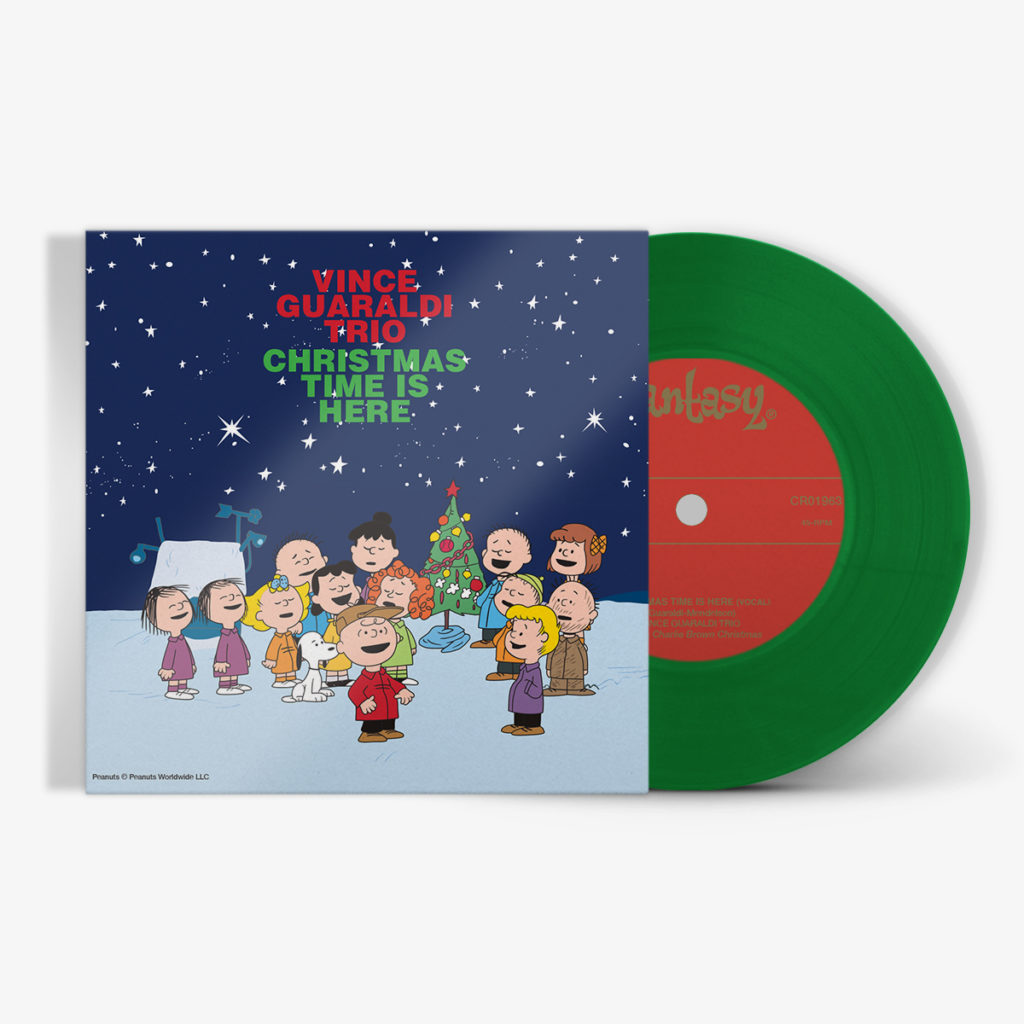 Take a trip to a land where every hour is happy and the sunsets are always lush in Orange Sunset—the latest addition to the popular Jazz Dispensary series. Kick back with a perfect soundtrack of impeccably crafted grooves from the likes of Merl Saunders, Johnny Hammond, Funk, Inc. and The Blackbyrds, with production by David Axelrod, The Mizell Brothers, and Dale Warren. All tracks were remastered from their original analog tapes, while the album comes pressed on fanciful, yellow starburst-colored vinyl. Limited to 3,500 copies, Orange Sunset comes housed in a jacket featuring original designs by singer-songwriter and visual artist Dana Falconberry.
Tracklist – Orange Sunset:
Side A:
1. David Axelrod — Everything Counts
2. The Blackbyrds — Funky Junkie
3. Johnny Hammond — Shifting Gears
Side B:
1. Roger Glenn — Don’t Leave
2. 24-Carat Black — 24-Carat Black (Theme)
3. Merl Saunders — Righteousness
4. Funk, Inc. — Goodbye, So Long 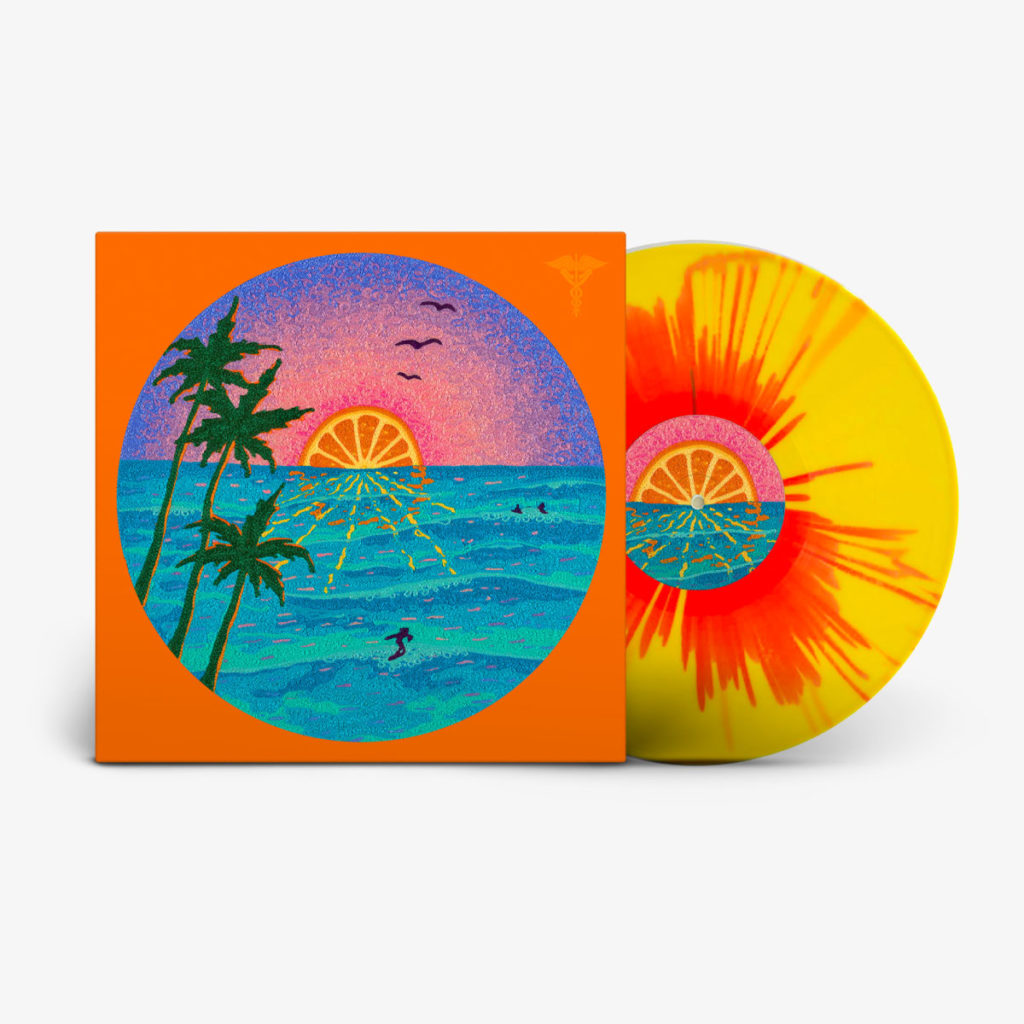