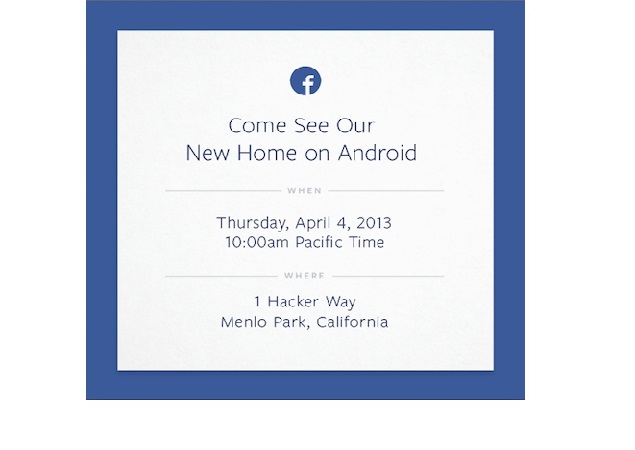 Facebook has sent out invites for an event at their headquarters to be held on April 4th. Facebook plans to showcase its ‘new home on Android’ next week at 10:00AM Pacific Standard Time.

There have been a lot of rumors flying around  for some time now (ever since the Graph Search launch) that Facebook would be launching its own smartphone. As of now, there is still no confirmation this could be it.

But reports are emerging that suggest this event might indeed be the unveiling of the long-awaited Facebook-phone, or at least, an HTC device that would run an altered version of Android “with deep native Facebook functionality on the homescreen”.

We’ve had devices like that in the form of HTC ChaCha and HTC Salsa before – but those were merely Android phones with slight Facebook integration. That is unlikely to be the case this time. Facebook founder Mark Zuckerberg had already said last year that the company was going to push for ‘deeper integration with existing mobile platforms’, instead of building an entirely new phone.

The reports also indicate that this phone would come with a custom overlay on top for Android, similar to what Amazon did with the Kindle. An Android phone with a Facebook overlay (like the HTC Sense or Samsung TouchWiz) sounds deeply integrated enough – such an interface could give Facebook access to the user’s personal data – like call history, texts etc – to recognize people you mostly connect with. This in turn, could lead to a more relevant news feed for the user – which would show you more of the people you stay in touch with.

Again, there’s no confirmation on whether the event will showcase the phone. Whatever it is coming on the 4th of April, we will see Facebook’s new home on Android.