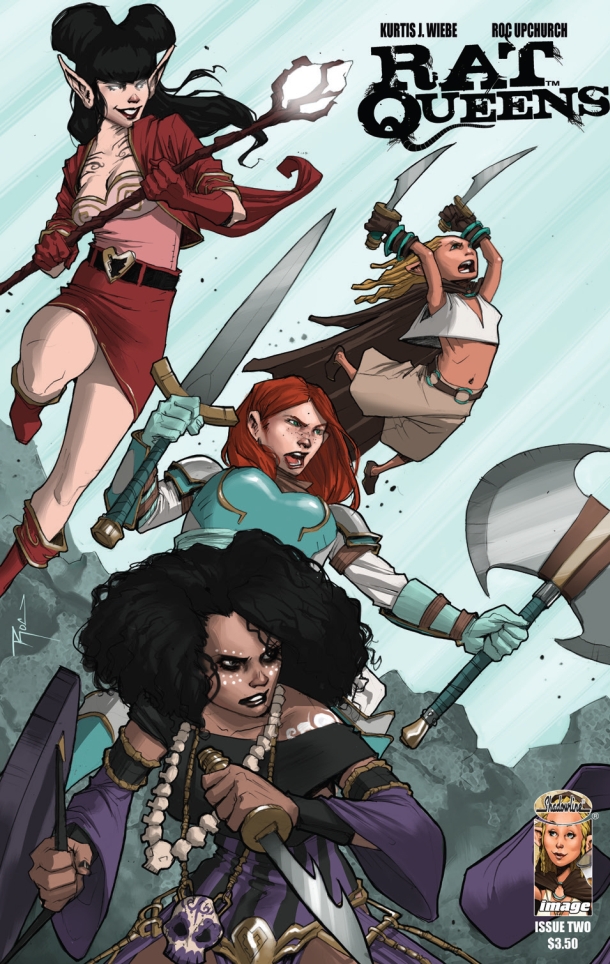 In other news- I want to be a Rat Queen!

The Rat Queens #2: I Love Your Blood Splatter

The second issue of The Rat Queens didn’t just blow my socks off; I may never find my socks ever again. If I do, they’re going to be huddling in a corner, muttering “Can’t sleep, Rat Queens will get me!”

If you missed last week’s review….Oh look, here it is!

Now let’s get into this week’s offering.

It’s so difficult to tell you what’s going on, without giving away all the juicy, bloody details. Except to tell you that the details of this comic are both juicy and bloody.

But what I can tell you about in great detail after seeing this issue, is why I have no problems with proclaiming that Roc Upchurch (the artist) is The Man. If not The Man in relation to everything, at least when it comes to comic book gore.

Gore seems like the easiest (some would say laziest) thing to do for entertainment value. But if you think that, then you’re wrong. Gore is difficult. Gore is like Vegemite. You put it on too thin and you’re not getting the full hit of the awesome. You put it on too thick and you can’t enjoy the taste. Obviously, everyone has different tastes and thresholds for gore/Vegemite, but the general rule, in my book, is to try and find that happy place in the centre. Spread it on thick, if you like, but break it up with some humour (or cheese, if we’re still talking about Vegemite). Don’t overstate it, or you’ll risk turning off the majority.

For a full lesson in ‘How To Do Comic Book Gore Well’ your required reading list will include- The Rat Queens #2 because they’re doing it right!

But it’s not just the art that made this ride so much fun. It’s the words.

The swear words, the threats, the insults and the drunken conversations are seamlessly put together. If it comes out in later years, that Kurtis J. Wiebe had actually traveled to a world filled with fantasy and was merely a record maker of events that actually happened, I would not be surprised.

The dialogue is not only fun, it’s natural. Plus, the way they’re progressing the storyline, is delicious. It’s still RPG Fantasy style, but it’s being treated in a comedic way. A dark, twisted, comedic way. We’re also slowly learning about the characters, which is just as important as the action that goes on around them.
Everything done in issue 2 of The Rat Queens was put together so well. It looks effortless on their part, which probably means they spent hours on it. The pairing of these two (Wiebe and Upchurch) is so very perfect–sublime. It’s like the perfect Vegemite and cheese sandwich… or pizza because those are nice too. They hit all the right notes, in exactly the right beat.

If you’re not reading them already, then stop not reading them! This is what you want to read. Unless you hate great comic book art and swear words…..In which case, Mameshiba have a small comic book. That’s probably more your style anyway.

This is a scary thing to do, especially because jinxing this is totally not my intention, but I have declare that the score for the second issue of The Rat Queens-

10 greenstick fractures out of 10.