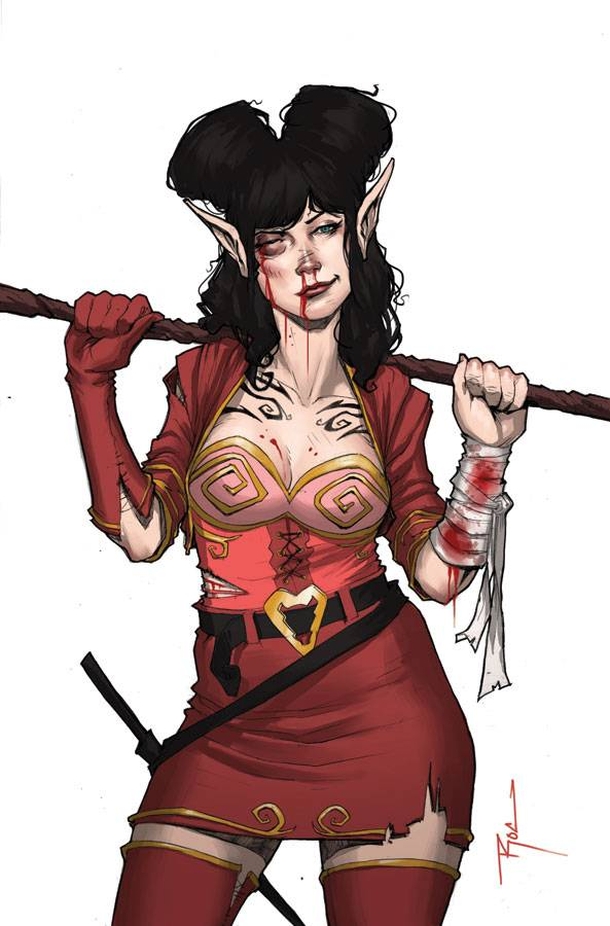 Remember the good natured fun that The Ratties got up to in the 80’s and then again in repeats in the early 90’s? They were funny and the baby was a genius, it was like G-Rated animal version of Family Guy. Well, The Rat Queens are nothing like that.

The Rat Queens: Issue #1 The RPG You Need.

Image have been on a roll, as far as picking series that gain almost instant popularity. Whether it’s that they really know their stuff, or they have a device that tells them the future, it doesn’t matter. Whatever they’re doing, it’s working. The Rat Queens have joined Ghosted and Zero as the third title to sell out in their first issue.

And it’s not surprising. If Sword Art:Online is the anime for MMORPG players, this is the comic book series.

Hello, I’m a shouty person, not to be confused with ‘the Shouty Man’ from Horrible Histories.

Have you ever wanted to be in an RPG, but hate having to roll some die or learn rotations so you can get the most out of your DPS/Heals? Of course you have. Try “The Rat Queens”! It’s like being in an RPG, but without the button mashing or Dungeon Master who doesn’t understand theatrical pauses!

You can stop reading in “Shouty” voice now.

Instead of actually having to play an RPG, you just have to read about four completely undistressed damsels are sent on a quest to kill some goblins in a cave. Their little band comprises of a cleric, a thief, a mage and a warrior. Their band/guild is known as the Rat Queens.

The first issue, like all good first issues, throws us head first into the world that the Rat Queens live in. It gives away enough information to intrigue us, but without giving away too many juicy details.

The four main characters are already established, with fully formed personalities and skill sets ready to be discovered by the reader. Too often with groups in comics or cartoons, this isn’t the case. You’ll have one or two members of a group or party who are actually interesting, with the rest sort of acting like slightly more vocal versions of “guy in the red shirt in Star Trek”.

With The Rat Queens, it’s more like, a grown up version of Winx Club. Except instead of one who’s into technology and another one who’s totally boy crazy, you have the human who is a reformed cultist, the nymphomaniac hobbit, the dwarf warrior who makes terrible jokes and the dark elf who’s judgey of her parents just because they’re necromancers. (Seriously, kids these days!) 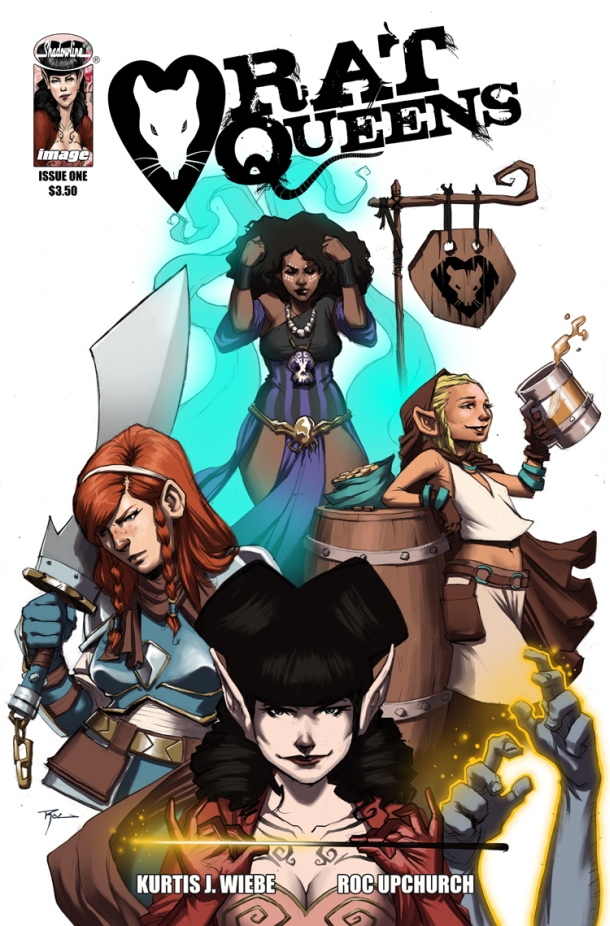 The world that exists around The Rat Queens is already quite familiar because, as I said before, it’s your typical RPG world.

But it doesn’t feel derivative. While it plays on the collective idea of standards RPG settings (a town centre, a forest, a cave with bad guys in it), it has it’s own feel. Even a group of Dark Elves in the book could be mistaken for clones of Malus Darkblade himself! But the artwork, works. It’s exactly the type of artwork that should be used to tell this story.

Also, there are also some really, truly, beautiful gore scenes.

If you enjoyed the artwork in KickAss (John Romita Jnr, Tom Palmer, Dean White) then I think you’ll find a similar love for the work done in The Rat Queens. The colouring is slightly more faded than I would have liked, especially when it comes to the blood. But, my personal preference is for the kind of red I’ve only ever seemed to have found in Carbon Grey.

It’s an incredibly fun read and a comic I found myself reading a second time, just for the hell of it! While it didn’t blow me away, it did make me want to be extra best friends with it. It was fun. There was very little angst, or fear, but rather excitement at the blood letting that would obviously happen

If this series was a disease, colour me infected.